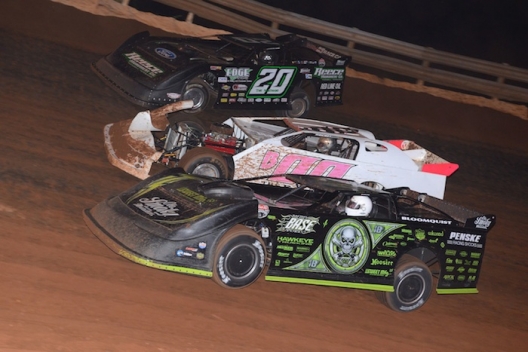 Owens, 42, passed the 50-year-old Bloomquist for the lead on the 36th lap and then sailed away for his second series win of the season in front of a huge crowd at the high-banked, one-third-mile oval. The three-time and defending Lucas Oil Series champion earned $10,000 for his second triumph in his last three starts on the tour.

Bloomquist led the first 36 laps of the event until he got trapped behind a lapped car, which allowed Owens to sweep by him on the outside coming off turn four. Bloomquist spent the remainder of the distance turning back challenges from the hard-charging Chris Madden of Gray Court, S.C., to finish second. Madden settled for third place, with Lucas Oil Series points leader Don O’Neal of Martinsville, Ind., placing fourth and two-time Tazewell track champion Billy Ogle Jr. of Knoxville, Tenn., completing the top five.

“The car was just great all night,” said Owens, who drove his Mike Reece-owned Club 29 Race Car to his 46th career Lucas Oil Series victory — just two wins behind Bloomquist’s tour-record total. “The race got off to a rough start; I think it was a little bit slimy down low there in (turns) one and two. When I saw Scott catch the traffic, I figured I might as well go in harder in turns three and four up top. It worked out for us.

“It has been a long day. My mom had surgery this morning, and they may have to re-do it again tomorrow, so my thoughts are with her.”

Owens’s score came at the track where he won his first-ever Lucas Oil Series event, on Sept. 4, 2005. He also continued to draw closer to the points lead, pulling within 40 points of O’Neal.

Bloomquist was happy with his performance despite losing the lead late in the race.

“Yes, the car was really fast,” said Bloomquist, who started from the pole position ith Owens alongside him. “We had a good lead there for a while. With that long green-flag run we had, plus the lapped traffic, our car tightened up a little bit.

“Congratulations to Jimmy on the win. He ran a good race. On the move he made for the lead, when you are the trailing driver you have the advantage of seeing ahead better. He made the right move. I went down low and it cost me. But still, we are satisfied with our run.”

Madden, 38, nearly took the runner-up spot in the closing laps as he pulled alongside Bloomquist but couldn’t complete the pass.

“We had a good run on Scott,” said Madden. “I thought maybe I could get by. It’s tough to pass here sometimes. This is our first race in May, so it felt good to get back behind the wheel. We are looking forward to the rest of the season.”

Notes: Four caution flags slowed the A-Main, all by lap 15. … The most serious incidents were a pair of multi-car crashes on lap two that sent two drivers into flips on the high-speed track. First Jeff Wolfenbarger of Clinton, Tenn., flipped in turn one in a tangle that included Dennis Erb Jr. of Carpentersville, Ill., and Josh Henry of Newport, Tenn. On the restart Steve Francis of Ashland, Ky., got upside down amid a pileup included fellow series regular John Blankenship of Williamson, W.Va. … Wolfenbarger emerged from his car without apparent injury, while Francis tweeted that his back was a little sore but he was otherwise OK. ... Fifteen drivers continued following the incidents. ... Other caution flags were put out for Bobby Mays of Limestone, Tenn. (lap four) and Mays and Earl Pearson Jr. of Jacksonville, Fla. (lap 15). … Brian Shirley of Chatham, Ill., was a no-show after running on the series through the first half of the season. He competed Friday at Farmer City (Ill.) Raceway.