Information provided by: Series reports (last updated June 1, 8:31 am)
Top side (where else?) propels T-Mac at Knob 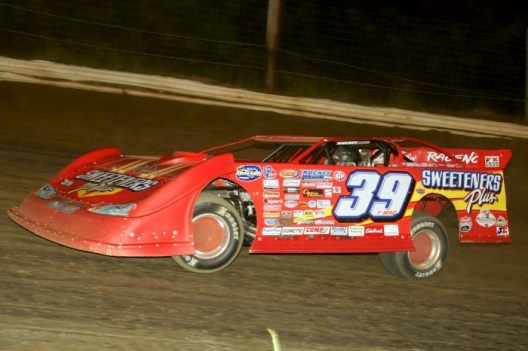 Tommy Michaels
Tim McCreadie heads for a $4,000 victory at Roaring Knob.
What won the race: Fastest in the outside groove, eighth-starting Tim McCreadie notched his third career series victory, topping fellow Watertown, N.Y., driver Tim Fuller for a $4,000 payday in the 2014 tour opener. McCreadie was up to second when outside front-row starter Jared Hawkins, who led the first 10 laps, began showing smoke and eventually pulled up lame.
Quotable: “It’s a cool little series," McCreadie said of the Appalachian Mountain Speedweek. "I think we all wish we could get a few more races in, but it’s a neat deal. It’s fun and it’s a relaxed atmosphere and the people treat you good. Whenever we’re freed up we’ll try to hit as many as we can."
On the move: Dan Stone of Thompson, Pa., came from the 20th starting spot to finish seventh.
Winner's sponsors: McCreadie's Ann and Carl Myers-owned Rocket Chassis is powered by a Pro Power Racing Engine with sponsorship from Bulldog Rear Ends, Coffey-McCreadie Enterprises, FK Rod Ends, Sweetners Plus and VP Racing Fuels.
Points chase: McCreadie gets the early jump in the points lead on the four-race miniseries. He's got 222 points to lead Fuller (196) and Vic Coffey (186).
Car count: 43
Fast qualifier: Mike Benedum
Time: 15.887 seconds
Heat race winners: Frank Heckenast Jr., Tim Fuller, Tim Senic, Tim McCreadie
Next series race: June 1, Bedford Speedway (Bedford, PA) $4,000
From series and staff reports

MARKLEYSBURG, Pa. (May 30) — When Friday night’s 40-lap Harbaugh Amusement Appalachian Mountain Speedweek feature at Roaring Knob Motorsports Complex began, Tim McCreadie’s eyes widened. He realized that his favorite groove — the outside groove — was ready for his use.

The driver well known as Topside Timmy proceeded to perch his Sweeteners Plus Rocket machine high on the 3/8-mile oval and rode it to a convincing $4,000 triumph in the opening event of the four-race series.

“They did a real nice job trying to moisture the top a little bit,” McCreadie said of the lane that propelled him to the checkered flag from the ninth starting spot. “The bottom quit throwing crumbs, and you could roll out there (on the outside). I actually wasn’t very good on the bottom, so I’m glad it widened out because who knows what would’ve happened if I had to park it on the bottom all night.”

McCreadie, 40, of Watertown, N.Y., found the top groove almost immediately, vaulting past Tim Fuller of Watertown, N.Y., and Frank Heckenast Jr. of Frankfort, Ill., in one swoop to reach sixth. He then continued his high-side assault, passing Jason Covert of York Haven, Pa., for fifth, D.J. Troutman of Hyndman, Pa., for fourth and Tim Senic of Elkins, W.Va, for third in shot order.

Finally, on lap 10, McCreadie sailed past the smoking car driven by race-long pacesetter Jared Hawkins of Fairmont, W.Va., to assume command for good. The World of Outlaws Late Model Series regular built a straightaway lead on his closest pursuers until some late-race struggles with lapped traffic cut his final victory margin over Tim Fuller of Watertown, N.Y. — one of McCreadie’s old rivals from the DIRTcar big-block modified ranks — to a more modest half-straightaway.

Austin Hubbard of Seaford, Del., advanced from the ninth starting spot to place third, 12th-starter Vic Coffey of Caledonia, N.Y. — McCreadie’s Sweeteners Plus Racing teammate — was fourth and Mike Lupfer of Shermansdale, Pa., finished fifth after starting from the pole and running second for much of the race’s first half.

“It’s hard here when you get in traffic,” McCreadie said of the challenge he faced during the event’s closing stages. “Leading is such a big deal — clean track and not dirt in front of you — and when I caught those (slower) guys they just kind of kicked up enough dust that I couldn’t really get off the corners like I was. Everybody raced good — when they saw me they did what they were supposed to do — but it’s just tough to get by ‘em.

“It was just our night.”

The triumph continued McCreadie’s rebound from a frustrating start to the 2014 season as he re-acclimated himself to running Rocket Chassis race cars. He’s heating up on the WoO tour this month with four consecutive top-five finishes, including a win on May 2 at 201 Speedway in Sitka, Ky., and a pair of runner-up placings.

“I appreciate everybody’s help,” said McCreadie, who recorded his third career win in Appalachian Mountain Speedweek competition. “It was a struggle two months ago, but we’ve really hit on something now.”

Fuller, 46, also worked the outside groove to advance forward, but he didn’t find the lane as quickly as McCreadie. He steered his Kennedy Motorsports Capital Race Car past Lupfer for second place with nine laps remaining and never drew close enough to seriously threaten McCreadie.

“Timmy got the top first,” said Fuller. “It was really good up there and you could roll around here. The track was actually was about the best I’ve ever seen it here. I’ve only been here a handful of times, and you could actually run around the outside and the bottom wasn’t so dominant.

“I’m real happy with it,” he added of his bridesmaid finish. “We needed this.”

The 22-year-old Hubbard chased Fuller through the pace to earn a satisfying third-place finish in his father Mike’s MasterSbilt machine, helping him forget his terrible Memorial Day weekend.

“We blew up two motors Friday (May 23) and then we blew up Saturday last week — and then my street car blew up Sunday,” said Hubbard, the 2011 AMS champion. “So we had a really nice week last week.

“But I believe in this car. This car’s been really good…it’s the third race we’ve run it, and I’m confident that if we can just get the rest working right — the driver and the people working on it — we’ll be good.”