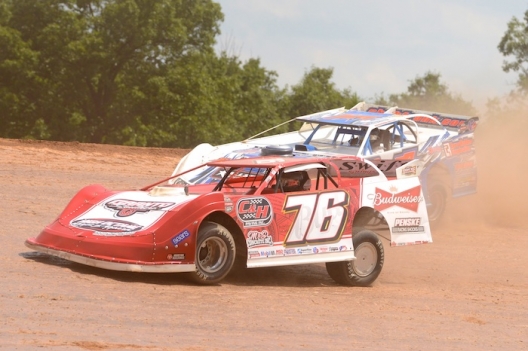 Charging to the lead at the drop of the green flag, Overton stretched his lead in the early running, with Richards moving into the second-place spot on lap 14. As Overton entered lapped traffic, Richards challenged the race leader, but slipped back to settle for runner-up at the checkers.

Overton, the 2015 World of Outlaws Rookie of the Year, was emotional in victory lane.

“I don’t even know what to say,” Overton told Outlaws announcer Matt Priuer. “My dad went home yesterday, he wasn’t feeling good. “I just wished he would have stayed one more day. He spent every dime he had to get me here.”

Falling to Richards to finish third in Friday’s Firecracker 100 feature, Overton knew holding off the three-time WoO champion was going to be a challenge.

“I knew when I got behind those lapped cars and I couldn’t make any ground on the top I had to get to the bottom. It was rubbering up. I don’t even know what to say … I’m glad I won.

“When I saw that blue car, I was like, ‘You’re going to work for this, you ain’t going to give this one away.’”

“He’s had it coming for a long time,” Richards said of Overton’s victory. “They got through lapped traffic there and held off. Those guys did a great job. We had a great car, it was just too late getting there.

“It rubbered pretty quick off of two. It took a a little bit to get it on entry and then lapped cars, it was hard to kind of get through them and get around there because the groove was so dominant. Once he got by (Dan) Stone, I just kind of rode behind him. I don’t think I could have got anything on the outside anyway.”

“Last night we ended up hitting a hole and knocking the nose out of the car early in the race,” Bloomquist said. “All that matters is tonight. We’re ready for that."

The afternoon program will include time trials, heat races, consolation races and the 30-lap main event. The weekend’s $30,000-to-win headliner will follow afternoon activities, including the driver autograph session and corn hole tournament.