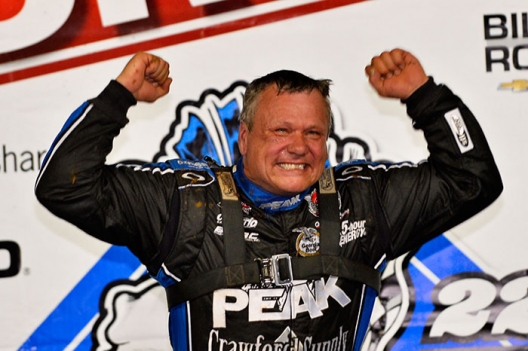 WHEATLAND, Mo. (May 24) — Don O’Neal had a simple statement to sum up his victory in Saturday night’s 22nd annual Show-Me 100 presented by ProtectTheHarvest.com at Lucas Oil Speedway.

“It wasn’t easy,” the 49-year-old driver from Martinsville, Ind., said with a smile.

In a wildly competitive race that featured eight lead changes among five drivers, O’Neal watched four rivals pass him to spend time at the front of the pack. But he kept fighting back, and finally, on lap 65, he overtook three-time and defending Show-Me 100 champion Jimmy Owens of Newport, Tenn., to seize command for good.

The Lucas Oil Late Model Dirt Series points leader marched away from the pack to register his first-ever triumph in the crown-jewel event — an accomplishment worth $30,000.

“We weren’t good at all when we unloaded here the other night and by feature time they had me a race car,” said O’Neal, hailing his Clint Bowyer Racing team members. “They just tweaked on it here and there and made it better all weekend. It made my job easy.”

Driving a car constructed by Barry Wright — the legendary chassis builder whose last Show-Me 100 victory was in 1995 with Scott Bloomquist of Mooresburg, Tenn. — O’Neal crossed the finish line with nearly a straightaway edge over Earl Pearson Jr. of Jacksonville, Fla., who advanced from the 24th starting spot to record a career-best finish in the event.

Pearson, 42, overtook Owens for second on lap 79, but without a caution flag to tighten the field he never drew close enough to threaten O’Neal with his Bobby Labonte Motorsports Longhorn car.

Bobby Pierce, 17, of Oakwood, Ill., came on during the race’s second half to finish third in his second career Show-Me 100 start. Bloomquist, who led laps 32-33, and Owens, who paced laps 60-64, finished fourth and fifth, respectively.

But that’s how things turned out for O’Neal, who understood why he kept getting overtaken.

“Running around there on the bottom you’re not very hard on your tires,” O’Neal said, “and then if you run up there in the middle to the top you heat your tires up. I was afraid on those cautions (the race’s three slowdowns came on laps 31, 34 and 57) those guys would get a chance to cool their stuff off and make a run on us, and that’s exactly what happened.”

Bloomquist was the first driver to jump to the extreme outside of the 3/8-mile oval on a restart and find success. The five-time Show-Me 100 champion vaulted past Owens and O’Neal following a lap-31 restart to briefly nose in front.

Stovall followed Bloomquist to the high groove on the lap-31 restart and made it work even better, completing an explosion from fifth to first when he surged ahead of Bloomquist on lap 34. But Stovall lost the lead to the low-running O’Neal on lap 47 and proceeded to fade from contention, ultimately finishing seventh.

Then there was Owens. Gunning for his unprecedented fourth consecutive Show-Me 100 win — a feat unprecedented in Dirt Late Model racing’s crown-jewel events — he moved from the sixth starting spot to second by lap 25 but slipped back to sixth on a lap-31 restart. He was still fifth at the lap-57 caution, but when the green returned he put his Club 29 machine on the top side and sailed by all the cars in front of him to assume command on lap 64.

Owens overheated his tires running so hard in the outside groove, however, and he couldn’t stop O’Neal from motoring by on the inside on lap 65.

“I just never give up on that bottom. As bad as I wanted to jump up there (to the outside lane), I just wanted to make sure I kept my stuff underneath me. That way I’d be good them last 30 laps.”

O’Neal had plenty left for the race’s final stages. He relentlessly hugged the inside of the track for the 43-lap green-flag stretch that closed the 100-lapper, giving him a victory in a race that had long eluded him.

Pearson acknowledged that O’Neal was simply flawless for the entire race.

“Don O’Neal never made a mistake,” Pearson said. “It was extremely tough to stay right around the bottom for 100 laps, and Don O’Neal, he did it.”

Pearson’s best shot might have been after he reached second place on lap 48. He soon caught O’Neal, but the lap-57 caution flag changed the course of his bid.

“That last restart I was right up there starting second and then I got off into turn one and lost all my rear brakes,” said Pearson, whose best finish in nine previous Show-Me 100 starts was fourth, in 2008 when the race was contested at West Plains (Mo.) Motor Speedway. “We were just so hard on the brakes trying to stay around the bottom that we lost ‘em on that restart and I slid up and fell back to fifth. Once I got ‘em pumped back up I drove back up through there (to second on lap 78), but we couldn’t catch O’Neal.

“I’m happy though. Our car was good for how terrible we were when we first got here on Thursday. We kept dialing it in and we salvaged a good finish.”

The 12th-starting Pierce, meanwhile, broke into third place with a lap-84 pass of Owens and appeared to be closing on Pearson, but some mechanical woes prevented him from mounting a challenge for second.

“I was just really trying to catch those guys but we had a little bit of a carburetor issue,” said Pierce, who entered the event with 11 feature wins at 11 different tracks this season. “The (engine) almost died about 15 times and kind of lost me some ground, especially after I got to third.”

The race’s three caution flags were caused by Jackson, who led laps 1-4 and 7-8 but slipped back to sixth before slowing on lap 31 due to a broken fuel pump; a lap-34 tangle in turn four that swept up former Show-Me 100 winner Terry Phillips of Springfield, Mo., and Billy Moyer Jr. of Batesville, Ark.; and Jared Landers of Batesville, Ark., who slowed with a flat tire on lap 57.

Notes: The victory was the 35th of O’Neal’s career on the Lucas Oil Series, ranking him third on the tour’s alltime win list. … A burst of heavy rain crossed the area Saturday morning and drenched the grounds; the infield and camping areas were left especially muddy. But there were no issues with the pit area since it is completely paved, and the racetrack rolled in nicely for hot laps to start just after 6:45 p.m. CT. … Bloomquist made his 22nd career start in the crown jewel’s A-Main. He’s the only driver to start every Show-Me 100. … Eight drivers made career-first Show-Me 100 feature starts: Garrett Alberson, Robert Baker, Ryan Gustin, Rodney Sanders, Jason Bodenhamer, Matt Furman, Jason Papich and Travis Dickes. … Three-time Show-Me 100 winner Wendell Wallace of Batesville, Ark., started 31st after earning a past champion’s provisional. He was the fastest qualifier among the two former winners who failed to qualify; Brian Birkhofer was the other. … Tommy Weder of Woodward, Okla., won the 20-lap Non-Qualifiers’ Race and opted to bypass the $2,000 top prize in favor of starting 32nd in the A-Main.