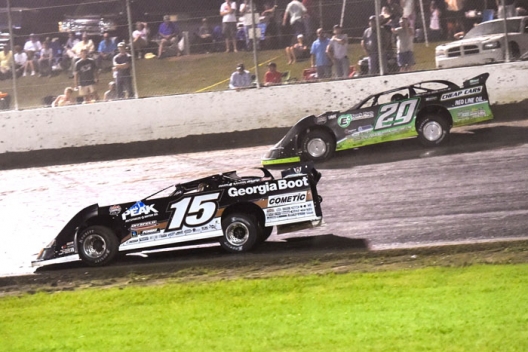 The sixth-starting Lanigan, a former World of Outlaws Craftsman Late Model Series champion notching his first national touring victory since last September, drove a new Club 29 Race Car to victory at the 3/8-mile oval by using the low groove to get by a higher-running Owens.

“We just kept on playing with that bottom and I kept feeling a little bit more and more (traction) every lap coming off of (turn) four,” Lanigan said. “Jimmy really didn’t know (the low groove was getting fast); he was trying to pass them lapped cars out there, so that’s the bad part about leading, you really don’t know where to be, and when you’re running second you can move a little bit more.

Owens, who started fourth, took the lead Landers on the fourth lap and controlled most of the race but struggled with slower cars in the high groove in the race’s late stages.

“(The track surface) started to latch down a little bit off (turn) four, but (Lanigan) had a good hot rod, too, to get up there to be there,” Owens said. “We’d tried the bottom (groove) two or three times and it just wasn’t there for us, so I just stayed up top.

“I knew once I got those lapped cars and I couldn’t get by ‘em that we were probably in trouble, but I felt like I just needed a little bit to get past that one car and I was going to get down, and I never cleared him and Darrell snuck up in there and filled the gap. And once we got down, we were able to maintain second.”

The 46-year-old Lanigan was glad to sneak past and notch his first Lucas Oil Series victory as a tour regular and second Lucas Oil victory overall. His previous series victory came in 2013 at Knoxville (Iowa) Raceway as he’d struggled since joining the tour full time in 2016.

“Man, we’ve changed everything. We changed cars, we changed this, we changed that, and you’re like, ‘I don’t know.’ And you start questioning yourself. You know in the back of your mind, you can do it … you just gotta have what we did a couple of years ago: get it all back, get a good program, get all the pieces back together, and that’s pretty much what we did tonight. … When you get everything together you can win races.”

Landers jumped into the lead from outside the front row to lead the first three laps, but Owens went ahead on the fourth lap and took control while Lanigan gradually worked his way to the front from his third-row starting spot.

At halfway, Owens was in control with Landers in second while Lanigan tried to take the third spot from Sheppard. Lanigan made slight contact with Sheppard working into turn one before taking the spot a lap later as the top five ran over a straightaway span.

Lanigan took the second spot from Landers on the 34th lap while Owens was still in control of the race while navigating the high side, barely missing a slowing Chad Thrash in turn two as Lanigan was turning up the heat.

Lanigan went underneath on lap 48 to take the lead with Owens fighting back to briefly regain the point on the backstretch. But Lanigan again went ahead exiting turn four and maintain his lead the rest of the way.