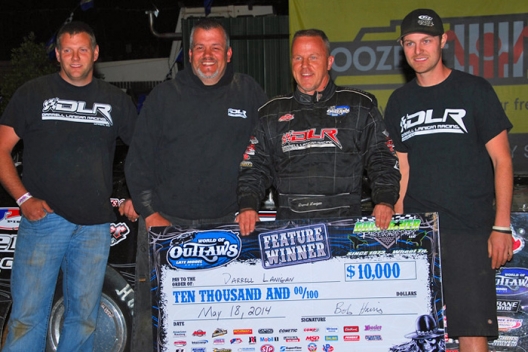 WHEEL, Tenn. (May 18) — Darrell Lanigan and Tim McCreadie battled up front for the third straight World of Outlaws Late Model Series event Sunday with the points-leading Lanigan coming out on top at Duck River Raceway Park for his series-leading fourth victory of the season.

The third-starting Lanigan, of Union, Ky., took advantage of lapped traffic to slip by the pole-starting McCreadie on the 31st lap, then turned back a final charge from the Watertown, N.Y., driver with 10 laps remaining and edged away for a $10,000 payday in front of a record crowd.

“He’s been really good here lately in making me get up on the wheel, so it just makes us work a little harder and I'm sure they're working harder,”  said Lanigan, who has three victories in his last four series starts. “I can't thank everybody, thank my crew, thank Jason (Jameson), Adam (Logan), Richie (Davis). Everybody at the shop, (Ronnie) Stuckey and them back down there at Louisiana doing a great job, like I said I can't thank everybody enough.”

McCreadie, who has finished in the top two with Lanigan each of the last three series events, was 1.315 seconds back at the checkers in the caution-free event that lasted fewer than 12 minutes at the quarter-mile oval in Middle Tennessee.

Home-state driver Mike Marlar of Winfield rallied from eighth to finish third, but he couldn’t catch the frontrunners in crossing the finish line ahead of outside front row-starter Rick Eckert of York, Pa., and Ray Cook of Brasstown, N.C. Fast qualifier Shane Clanton finished a lap down in 11th.

McCreadie jumped into the lead over Eckert at the outset and kept Lanigan in check through the first half of the race, but when he was trying to lap Chase Junghans with about 20 laps remaining, Lanigan was able to sneak past.

“I don't know, he was a little bit better than I was and I just kind of, I got stuck behind Chase there a little bit … Darrell was already beside me, I didn't really have nowhere to go,” McCreadie recounted. “I couldn't really just cut left and rip his right front off, so I just, you know, it's just the way it goes.

“I almost got it back so, I needed a yellow maybe to cool the tires off so we could fire off again because we were a little softer than they were but I'm not going to complain man. We were running in the back of two months ago, so now we'll be up front for a while so it's fun.”

McCreadie’s best chance to regain the point came near lap 40 when Lanigan was trying to get around Clanton’s slower car, and McCreadie pulled within .176 seconds of the leader.

“I saw a car out there, I wasn't sure if it was (McCreadie) or a lapped car,” Lanigan said. “I just knew I had to get going, so I just kind of sliced and diced a little bit there and got the win.”

McCreadie gave it his best shot.

“I thought when he got hung behind Shane there, I thought there was my chance and I tried,” McCreadie said. “I just couldn't stick enough on entry to get off the corner, but this car's been really good.”

Marlar could only watch from a distance, waiting for a caution that never came.

“I needed one but that's all right. You know what, you got to win them how they come to you and we needed to get one of them cars turned around or something,” Marlar joked. “But we don't want to do that, we just want to win the race fair and square.”

Notes: The race was the third scheduled event of a weekend tripleheader. McCreadie topped Lanigan in Friday's event at 201 Speedway in Sitka, Ky., while Saturday's stop at Smoky Mountain Speedway in Maryville, Tenn., rained out. ... Eric Wells of Hazard, Ky., last year’s Duck River winner, finished eighth. … Sixth-finishing Chub Frank of Bear Lake, Pa., finished his second-best series finish of the season; he was fourth on May 2 at Fayetteville (N.C.) Motor Speedway. … Chase Junghans of Manhattan, Kan., who led half of Friday’s race at 201 Speedway, appeared to be on his way to a heat race win at Duck River before getting sideways on the last lap. … Shane Clanton of Zebulon, Ga., posted his first fast time of the season, but he finished third in his heat race after starting on the pole and was a lap down in the 50-lap main event. … Clanton and fellow Georgia Clint Smith topped the night’s time trial qualifying groups; Smith finished 14th in the feature. … Duck River’s standing-room only crowd broke the track record.