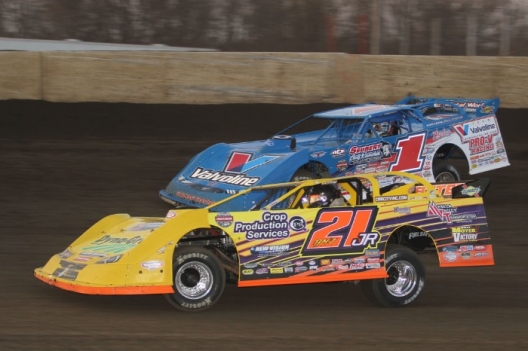 “If you would have told me we’d win both of them, I’d say you were crazy,” Richards said of his weekend sweep. “We’ve been really fast here in the past, we just haven’t been able to capitalize. I think we knocked bumpers off the last couple of years and lost power steering. The car’s been really fun to drive and I just didn’t want to mess it up. I tried to get a good pace early and once we were able to get a rhythm going, I tried to get to the lead as quick as I could.”

With second-running Pierce reeling in the race leader as the race neared the checkers, a lap-55 worked in Richard’s favor. Out of lapped traffic and into clean air, the three-time World of Outlaws champion went on to notch his 62nd career series victory

“I saw my guys kept closing their hands and it was hard to tell because we were boxed in lapped traffic,” Richards said. “It was good to see open track at the end. We were sliding in (turns) one and two more than I wanted to. But we were able to hold off and get a win. It was really cool.”

Fighting back late-race challenges from Bloomquist, Pierce held on to finish runner-up, with the Hall of Famer running third. Mike Marlar of Winfield, Tenn., improved from his seventh-place starting spot to finish fourth, with Brandon Sheppard of New Berlin, Ill., rounding out the top five.

“I was really catching Josh (Richards) and I think I might have went harder on tires than he did, so I was better on the long runs,” Pierce said. “But I was hoping that as long as I got to second on the restart I’d be OK, but then Scott (Bloomquist), right going into (turn) three came up on me a little bit. After that I was just of stuck behind him the rest of the way. I was trying to get back by him, but to pass Scott once is hard. To pass him twice, that’s just unheard of. I tried my best and we’ll take second.”

Making the long drive from East Alabama Motor Speedway in Phenix City following the conclusion of Saturday’s Lucas Oil Series action, Bloomquist picked up his third top-five finish of the weekend. The haul to Illinois was worth the trip, he said.

“We’re just continually working on our car, trying different things and trying things in different conditions,” Bloomquist said. “Right now, we really couldn’t race enough. I’m not sure yet, but I think we might have went a little too hard on tires. The car wasn’t bad, we just picked up a little push after we run a little bit. We’re satisfied, I guess. We just have to get back to work."

Notes: The race was slowed by two cautions. ... The first yellow flag waved on lap 37 when sixth-running Chase Junghans spun in turn four. … Ryan Unzicker drew a caution on lap 55 when he slowed on the backstretch. ... Boom Briggs hit the turn-three tire barrier during time trials, heavily damaging his car and injuring his wrist. … Along with Bloomquist, fifth-place finisher Brandon Sheppard also made the trip from East Alabama to enter Sunday’s event.