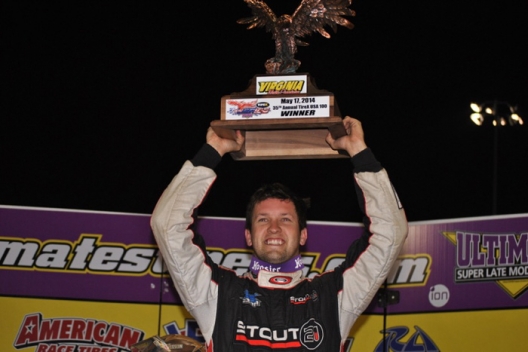 The $10,000 triumph was not only Ferguson’s first of a struggle-filled 2014 season, but also came over two especially formidable competitors.

Ferguson, 24, of Mount Holly, N.C., passed Gregg Satterlee of Indiana, Pa., for the lead on lap 11 and went on to beat Satterlee and Jonathan Davenport of Blairsville, Ga., to the checkered flag in the 50-lap feature, giving the up-and-coming driver a win to remember.

“This one ranks up there,” Ferguson said after celebrating his victory in the 35th running of the event that Ernie Shelton created at Beckley (W.Va.) Speedway. “It’s probably the biggest win I’ve had so far. I won a 10-grand at Gaffney (S.C.) and I’ve won some races across the Carolinas and Georgia, but this is a real big one.

“The guys who ran second and third — those two guys are on their game right now. I haven’t had a good enough car in a while to really race with those guys like this, so the fact that we were able to beat Gregg and Jonathan makes this one real special.”

In a race that saw Rambo Franklin of Gaffney, S.C., place fourth and Brandon Overton of Evans, Ga., steer Troy Baird’s car to a fifth-place finish, Ferguson started from the pole position but was outgunned by front-row mate Satterlee at the initial green flag. Satterlee, 29, paced laps 1-10 before Ferguson snuck by in lapped traffic.

“I beat Gregg on the start, but he was really aggressive at the beginning on the top (groove) and got by me,” said Ferguson, who drove his family-owned Warrior car. “He kind of drove off a little bit, and I wasn’t trying to be aggressive. I went with a 1450 and 1350 (tire compounds) — the same tire combination I ran last night (in a second-place Ultimate Series run at County Line Raceway in Elm City, N.C.) — and I knew that if I didn’t drive my car straight I’d probably blister it like I did last night.

“When he caught lapped cars we kind of bunched back up because he was driving off in there so deep that he would have to check up for the lapped cars and that would just ruin his line. One lap he messed up there (between turns three and four) and really crossed it up to try and turn down across the track to pass somebody, and I just happened to catch a run on him. I got all the way below him down the straightaway and then we went into (turn) one….I know he knew I was there, but there was a lapped car on the outside so he kind of tried to pinch me down and we went in there and hit doors. I made the best out of it and took the lead.”

Satterlee didn’t emerge from the exchange nearly as well. He immediately fell to fourth place behind Russell Erwin of Beaverdam, Va., and Davenport, and shortly after a lap-13 restart he tumbled to sixth.

“I just caught the lapped traffic just at a bad time,” Satterlee said. “When I lost the lead we went in three-wide and Ferguson got underneath me, and I was sandwiched in between him and a lapped car. I got too wide and I lost like three positions in one lap, and then I got high on the restart and lost more spots.

“After that I had to get regrouped.”

As Ferguson clicked off laps up front, Satterlee battled back into contention. He reached second place on lap 44 after racing side-by-side with Davenport for the better part of two circuits around the half-mile oval and sought to run down Ferguson, who knew his edge was rapidly shrinking.

“I guess midway through the race I had a little bit of a lead,” Ferguson said, “but the last 10 laps I was slowing my pace down so much because we were catching lapped cars and they were just kind of running my groove. I really got out of rhythm with about five to go, and then I seen the sticks (signals displayed by a crewman) getting smaller so I knew somebody was coming.

Satterlee tossed his Rocket machine around the extreme outside of the speedway over the final laps and closed right up behind Ferguson, but he couldn’t pull off a dramatic pass. His final-lap bid fell short when he lost momentum on the outside of turns three and four, leaving him to fight off Davenport for second.

“With about 10 or 12 to go I just started running as hard as I could,” said Satterlee, who was 0.430 of a second behind Ferguson at the finish line. “I could make time in one and two, but I just couldn’t do it at the other end. If I could’ve just maintained in three and four it would’ve been good, but I just couldn’t do it. Plus, I couldn’t catch any breaks with the lapped cars.

“On the last lap we followed that lapped car in (to turn one) and I kind of knew I wasn’t gonna go under Ferguson, especially if he went through the middle. So I just followed him and he was clear out against the cushion too — my nose was up under his back bumper. So then you’re going down the backstraightaway and you’re going, ‘Am I going high? Am I going low?’

“He kind of went in through the middle into (turn) three, and I went in too high and lost the front end in three. I probably wasn’t gonna pass him anyway, but maybe….had he slowed down a little bit for that lapped car, I maybe could’ve got him. But I lost my momentum and Davenport went blowing by, so I had to really come off four hard to get back by him and salvage second.

“I made that way harder than it should’ve been,” he added. “I just put myself in a hole and took too long to dig back out. But I’ll take second at this place. After almost burying myself at a track that’s not terribly easy to pass at sometimes, I’m happy.”

Five caution flags slowed the event, the most noteworthy coming on lap 24 when Erwin stopped on the homestretch with terminal engine trouble. The Steel-Block Late Model standout, who captured his first-ever Super Late Model feature the previous night at County Line, was running second at the time and appeared primed to bid for a sweep of the weekend’s Ultimate Series doubleheader.

Notes: Ferguson, the champion of the inaugural Ultimate Series season in 2011, recorded his fourth career win on the tour. His last triumph came on Oct. 12, 2013, at Dublin (N.C.) Motor Speedway. … Ferguson and Satterlee won the pair of 25-lap heat races that comprised the event’s unique format. Each prelim offered a $500 top prize. … A red flag was thrown for a wild homestretch accident on the first lap of the second heat. Dean Bowen of Whiteville, N.C., tossed a left-rear wheel and bounced in the air after running it over, and Ross Robinson of Georgetown, Del., spun into the inside guardrail. Robinson gingerly climbed out of his car and rode back to the pits in the ambulance; he injured his left wrist and planned to have it checked when he returned home. ... Jeff Smith of Dallas, N.C., had his two-race-old Pierce Race Car sidelined by terminal engine trouble during time trials. He drove Rick Gilchrist’s Crate Late Model the remainder of the night. ... Scott Autry of Fayetteville, N.C., caught the cushion in turn four during time trials and rolled over once. He was uninjured and his car did not appear to be seriously damaged, but he scratched from the remainder of the night’s action.