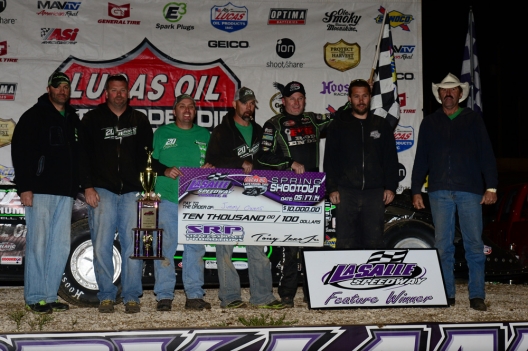 The three-time and reigning series champion ended a 20-race winless streak by overtaking polesitter and race-long leader Jared Landers of Batesville, Ark., on the 42nd of 50 laps in the Spring Shootout to earn $10,000 at the quarter-mile oval.

Owens, whose previous longest losing streak on the tour in the past seven years was a 15-race skid opening the 2012 season, continually worked Landers from the low groove entering the latter stages of the race.

“It was a good race. The track was, it was kind of hard to pass on, but you were able to run two-wide. There was a couple of lanes out there. I had a good track and was able to maneuver and get under them guys and get around 'em,” said Owens, who grabbed second from Scott Bloomquist before tackling Landers. “It seemed like (Landers) was trying to stay down there, and then he started sliding across. And that just worked to my benefit.”

Owens moved into second in the series standings behind O’Neal with a victory helped by the tire choice of crew chief Chris Fox on a track surfaced reworked after prelims.

“Everything played out … we rolled out there, I was really concerned about our choice, but Chris, he does an awesome job on our tires. Probably one of the smartest guys in the pits, and he does a super job for us,” Owens said.

Landers jumped into the early lead of a race slowed early when contact with Owens sent fourth-starting Jason Feger of Bloomington, Ill., into the frontstretch wall. Landers controlled the first half of the race while Owens and Bloomquist battled for second.

“It was surprising how I could take off,” said Landers, who used the higher groove on the track. “I thought I was going to have a little struggle with those guys early. It rolled that middle and just carried the momentum line, and I was getting to the lapped cars and I really didn’t want to get to 'em (but) they were on the bottom and I could use 'em as an advantage.

“I guess Jimmy, behind me, he kind of picked a better line. That bottom, it seemed like, after he went by me, I needed to be down there, but yet … my crew guy was trying to tell me to do something different, and I didn’t understand exactly what he was talking about it, so I tried it, and I kind of got myself loose. It just wasn’t my time to win.”

Landers was able to maintain enough momentum up high to turn back a few challenges from Owens before the winner took over for good with nine laps remaining.

“I know the laps were winding down and I knew we had a good car,” Owens said. “Yeah, yeah, you’re always worried. You never know what happens if he moves down and finds a better line. But you know, we had a pretty sporty car tonight.”

Beaten by one of the sport’s best, Landers wasn’t hanging his head.

“We’re happy with a second-place finish. It’s just good for our team and our confidence,” said the driver whose family is fielding a team after he left Clint Bowyer Racing after the 2013 season. “We’re glad to lead some laps. We had a good race car and we’ve been looking for a race car. Now we can go on somewhere else and maybe have a chance to win a race … or get in that position, anyway.”

Notes: Saturday’s event was the only series race of the weekend after Friday’s scheduled event was rained out; it won’t be made up. … Four cautions slowed the action, the first for Feger’s demise on the second lap and then on lap 14 when Jason Papich ended up facing the wrong way. … Brian Shirley of Chatham, Ill., spun into the infield on lap 27 to draw a caution and slowed again on the 33th circuit to bring out another yellow. ... Rookie contender Jason Hughes of Watts, Okla., retired with an overheating car under the lap-33 caution. … Only two home-states drivers finished in the top 10; Dennis Erb Jr. of Carpentersville, was the top Illini driver in ninth. ... Bobby Pierce of Oakwood, Ill., entered the event with victories in nine of his previous 15 starts; the 17-year-old was never a factor in finishing 11th. ... Several drivers, including Steve Francis, Brian Birkhofer and Chris Simpson, were penalized for illegal deck heights prior to qualifying and received only one lap.