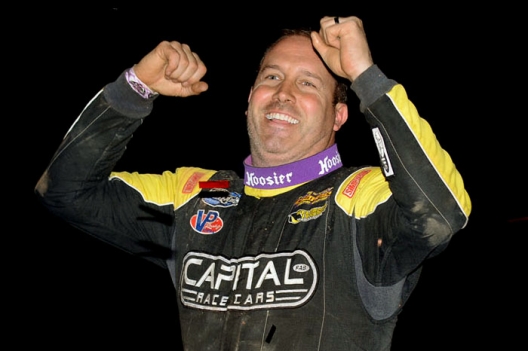 Starting outside the front row, Covert fought back challenges from Richards to take an early lead. Advancing from the sixth-place starting spot, Clanton charged around the high-side, reeling in the race leaders. The three cars crossed the scoring line side-by-side on lap 13, with Clanton pulling ahead to take the lead. The defending World of Outlaws champion held off Richards to score his 31st career tour victory.

“We qualified good and won our heat and just drew a little bad,” Clanton said. “We’ve got a good enough car to take advantage when we needed to and just bide our time and get the lead there.

“About two or three laps before that, I found the outside in three and four and I said, ‘If I’m going to pass them, I’ve got to take advantage. If they slow up a little bit in turn three, just blast the top and maybe I’ll be by them clear in turn four.’ And lucky that’s what happened."

Richards, a three-time World of Outlaws champion, finished runner-up, with Brian Shirley of Chatham, Ill., holding on to his third-place starting spot. Brandon Overton of Appleton, Ga., finished fourth, with Covert slipping back to round out the top-five.

“We had a great car tonight,” Richards said. “(Clanton) did a good job. I was up underneath of (Jason) Covert, I think just protecting a little bit too much on that bottom. Clanton just got a run and got around us. I knew once he got up there, he’d be hard to beat. I feel like we were better than he was later in the race, but if you’re running behind somebody, the track’s so dirty. But we had a really good car. We’ll definitely take it.”

Continuing his Speedweeks success at Georgia tracks, Shirley bounced back from a tough Wednesday night at East Bay Raceway Park with his third-place run.

“So far, Georgia’s been a pretty good state,” Shirley said. “Hopefully we’ll just keep everything running smooth. We’ve just got to gel a little more. We’re just learning a few things with tires and stuff. All in all, we’re real happy with everything and hope that Speedweeks keeps being good to us.”

Notes: The race was slowed by three cautions. … The first yellow flag waved on lap 14 when Billy Moyer Jr. slowed in turn one. … Dillon Wood drew a caution on the ensuing restart when he spun in front of the flag stand. … The final yellow flew on lap 17 for a turn-three tangle involving Wood and Casey Barrow.

Charging to the front of the field as the green flag waved, second-starting Casey Barrow took an early lead. A yellow flag waved on lap seven for a tangle in turns one and two involving Jordan Yaggy, Frank Heckenast Jr., Billy Ogle Jr. and others. Barrow held off polesitter Kenny Pettyjohn to win the second consolation, with Pettyjohn running second. Morgan Bagley ran third to transfer to the feature.

Crossing the line side-by-side, outside polesitter Coleby Frye pulled ahead of polesitter Brian Ligon to take the lead on the second lap. Sixth-running Austin Smith spun in turn one to draw a caution on lap seven. A yellow flag waved on the ensuing restart when Steve Casebolt hit the turn one wall. Just as second-running Ivedent Lloyd Jr. made the pass for the lead on lap eight, a yellow flag flew for Ligon who spun in turns one and two. Holding off Lloyd, Frye grabbed the win, with Lloyd finishing runner-up. Billy Moyer Jr. took the third and final transfer spot.

Edging ahead of fellow front-row starter Dennis Franklin on the opening lap, polesitter Brandon Overton grabbed an early lead. Pancho Lawler drew a caution on lap two when he spun in turn two. Pulling away on the restart, Overton picked up the heat race win, as Franklin held off a charging Rick Eckert to finish runner-up. Eckert ran third, with Chase Junghans taking the fourth and final transfer spot.

Outside polesitter Chub Frank jumped to the lead at the drop of the green flag, falling to polesitter Jason Covert at the line on lap six. A yellow flag flew on lap seven when Harry Wallace spun in turn two. Covert led the remaining distance to pick up the heat race win, with Frank finishing second. Boom Briggs improved one spot to finish third, with Dillon Wood running fourth to transfer to the feature.

Outside polesitter Donald Bradsher edged ahead of Josh Richards at the line to lead the opening lap, with Richards sliding to the front of the field in turn four to take the lead on lap two. A yellow flag waved on lap five when fourth-running Ivedent Lloyd Jr. slowed in turns one and two. Richards picked up the heat race win, with Brian Shirley improving from the fourth-starting spot to finish runner-up. Bradsher slipped back to run third, with polesitter Joey Coulter grabbing the fourth and final transfer spot.

Shane Clanton of Zebulon, Ga., enters the weekend as the defending World of Outlaws champion. Josh Richards of Shinnston, W.Va., who finished runner-up in the 2015 series points standings, has four Lucas Oil Series victories on his Georgia-Florida Speedweeks campaign.

Friday’s program will include time trials, heat races, consolations and the 40-lap main event. Super streets and pure streets are on the undercard.