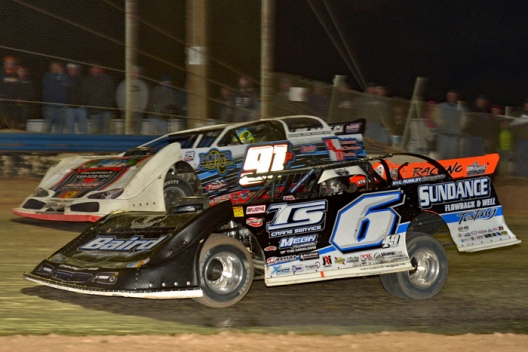 Davenport put an exclamation point on his miniseries points title Sunday night with an $11,000 victory in the 50-lap finale at the 3/8-mile oval in the desert. Dirt Late Model racing’s hottest racer led the last half of Sunday’s feature to wrap up a nine-day stretch in Tucson worth nearly $28,000 in points and purse earnings.

Surviving scrapes with the wall and a last-lap scare on the backstretch when a car slowed just ahead of him, Davenport took the lead from Jason Papich of Nipomo, Calif., on the 26th lap and led the rest of the way for his third victory in the six-race miniseries.

“I thought I gave it away there. I got to rolling there on the top and caught (Papich), and he moved up there at the last second and took the air off of me, and I hit the wall, and I wasn’t near as good after that, after I hit the wall the first time,” said Davenport, who wasn’t worse than fifth in any miniseries race. “That’s about as close to the wall as you can run, right there, that cushion don’t look like it’s 2 inches off of it. That’s kind of like where I like to run — I’d rather run up there than around the bottom.”

Surprising home-state star Ricky Thornton Jr. of Chandler chased Davenport in the high groove over the final 20 laps but ended up 1.430 seconds behind at the checkers during a week where Tucson drew more than 60 Late Model competitors.

Ryan Gustin of Marshalltown, Iowa, rallied from 18th to finish third while Papich, who led laps 9-25, settled for fourth. Steve Francis of Ashland, Ky., was fifth for his third top-five finish of the miniseries.

Polesitter Darrell Lanigan of Union, Ky., led the first eight laps in trying to repeat his Saturday victory, but his race ended when he was trying to lap Jimmy Mars, who made a high-to-low groove switch on the frontstretch and knocked Lanigan into the infield. A broken left-front tie rod prevented him from returning.

While Davenport won the lion’s share of Tucson’s cash, he’d been aiming for the Keyser Quarter-Million Challenge that paid $250,000 for a miniseries sweep, $100,000 for five victories or $50,000 for four victories.

Davenport made clear in victory lane that a couple of rulings that didn’t go his way — a disqualification for failing to report directly to the scales after an opening-night heat victory and the track’s admitted failure to enforce body rules when Don O’Neal won Friday utilizing a disputed sailpanel — didn’t sit well with him.

“I’ve gotta thank Keyser for giving us the opportunity to come out there. That’s the only reason we’re here,” Davenport said. “And I really believe that, if this thing was run right, and everything went the way it was supposed to, we’d have took home $50,000.

“But, you know, it is what it is. You definitely will never see me back out here, or the (No.) 6, I’ll guarantee it. (Co-promoter Chris Kearns) got in my pocketbook a little bit, and maybe I can get in his.”

He credited chassis designer and crew chief Kevin Rumley with giving him Longhorn Chassis that’s starting 2016 the way it dominated 2015.

“This car is just phenomenal, really, from when it’s wide open to when it’s real slick like it is,” he said. “We can run the bottom, the top … Kevin’s really done his homework this winter, him and (crew member) Bryan (Liverman), and Heath’s come on and they’ve worked their tails off on this thing, and I can’t thank them enough.

“(Kevin’s father) Lee Roy (Rumley) builds a great engine for all track conditions, so I’ve gotta thank him and say hello to him back home (and) my dad, this one’s for you. He told me the other night to win one for him, and that’s when Don (O’Neal) outrun me, so I finally got you one.”

Thornton’s steady run to a second-place finish paid $5,000, marking the richest career Late Model outing for the driver who on 47 modified races last season and made a guest appearance in the No. 33x owned by J.R. Haley of Baldwin, Wis.

“I was trying (to catch Davenport) … Jonathan’s really good, so, I mean, I’ve gotta thank J.R. for letting me wheel this thing since Wednesday,” he said.

Gustin, who won the Wild West Shootout finale in 2014, climbed from deep in the field for the second straight night, cracking the top five in the final 20 laps and posting his best miniseries finish of 2016.

“The draw’s tough, man, you start behind all them guys and (only) have eight laps to get there (in a heat race). It’s tough,” Gustin said. “Luckily the track’s wide enough you can race on it — really racy in my opinion tonight — and it’s nice for us to come from that far back to run third with this caliber of competition.”

Papich ended up fourth for his second top-five finish of the week, but switching from the low groove to the high groove didn’t pan out as he dropped three positions over the final 25 laps.

“I tried to take (Davenport’s) high line away. I saw the signals that I was a little better around the bottom, and I tried to move up and take it away,” he said. “I got close to the fence and I guess I wasn’t quite into it enough … I figured I’ll take a second or third over knocking the wall down and getting last.

“It was really good around the bottom (but) got a little tight in the center (of the corner) later, and I had to move up, but by that time I’d lost a little bit (to) the guys around the top.”

The feature was slowed by four cautions, the first for Lanigan’s demise then again on lap 20 when Ricky Weiss and Brandon Sheppard slowed to head pitside. Another yellow flag flew for some bumper tag on the lap-20 restart and Garrett Alberson slowed for a lap-32 caution.

O’Neal, the Martinsville, Ind., driver who won two miniseries races, retired on lap 27 with a broken radiator mount. Terry Phillips of Springfield, Mo., started fourth and ran in the top five most of the way before getting into the wall on lap 36 and dropping to seventh and out of contention.

Notes: AR Bodies sponsored the finale. … At Sunday’s drivers’ meeting, Wild West Shootout co-promoter Chris Kearns announced he and Kevin Montgomery will take the six-race miniseries to the Phoenix-area oval Arizona Speedway, a 3/8-mile dirt oval. The miniseries has been held in Tucson each of the past six seasons. … Justin Duty of Happy Valley, Ore., and Rob Odegard (12th) of Williston, N.D., made their first feature lineups of the miniseries Sunday. … Among drivers skipping the finale were Shane Clanton and Don Shaw, who tangled in a Saturday night heat wreck that caused significant damage to both machines.