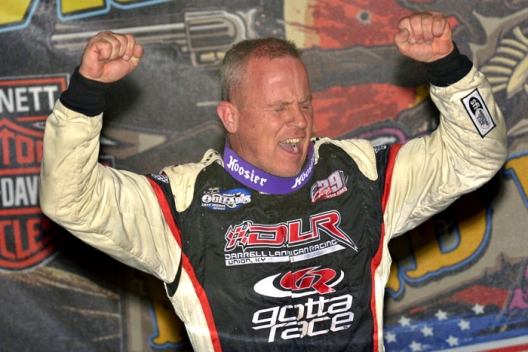 The third-starting driver from Union, Ky., went under Jason Krohn of Slayton, Minn. on the fifth lap at USA Raceway and raced to victory in the fifth round of the 10th annual Keyser Manufacturing Wild West Shootout.

Lanigan, a two-time winner last year in Tucson, notched his first miniseries victory of 2016 and first since joining the NASCAR star’s Dirt Late Model team last fall. He faced pressure from fellow second-row starter Ryan Gustin from the midway point until lap 23 when the Marshalltown, Iowa, driver retired during the 30-lapper’s lone caution.

Lanigan cruised after that, pulling away over the final seven laps for a $5,000 payday at the 3/8-mile oval.

“I can’t thank all these guys (enough), Anthony and Corey and Mike for coming out this week and helping us,” the 45-year-old Lanigan said. “Clint Bowyer and Casey back at the shop, I can’t thank him enough for giving me this ride. Should be a good year."

Ronny Lee Hollingsworth of Northport, Ala., finished 4.681 seconds behind as the runner-up while Jonathan Davenport of Blairsville, Ga., charged from 14th to third. Chris Simpson of Oxford, Iowa, came from 10th to fourth and Krohn rounded out the top five.

Lanigan's victory ended any hopes of drivers claiming money from the Keyser Quarter-Million Bonus, a program that posted $250,000 for six victories, $100,000 for five victories or $50,000 for four victories.

Lanigan led by nearly two seconds after 10 laps, but Gustin got rolling and drew within less than a half-second of the leader near the halfway point. Lanigan stretched back away, building a two-lapped car cushion before Gustin again drew close on lap 22, just before a yellow for a the turn-three spin of Austin Siebert of Grandview, Mo. Gustin came to a stop and pulled his helmet off during the caution period, then waited for a push back to the pits, his night over.

Hollingsworth quickly jumped into second on the restart, but he nor anyone else could keep up with the streaking Lanigan.

“We were really good in clean air once I could run my own line up there,” Lanigan said. “Man, we could open it up then. … Like I said, we had a good piece tonight.”

Hollingsworth, who had made just two of four feature lineups heading into Saturday with a best finish of 14th, was glad to get on track in his red No. 18.

“We haven’t had a real good week. We brought a new car out and, man, it’s been giving us fits, but finally we’ve got something to be competitive with,” said Hollingsworth, who turned 31 last weekend. “We’re just glad to get up in the top five and give all my guys a good run … they’ve been working their tails off for me.”

Davenport, who gained four positions in the final seven laps, was disappointed the passing-points format used for the heat races left him with a deep starting spot despite his heat race victory.

“I’ll be happy for a this 50-lapper tomorrow, in case we’ve gotta start in the middle of the pack again,” he said. “We’ve got a really good car. It just takes time on these slick places to pass cars. So, anyway congratulations to Darrell and Ronny had a good run … I wish we had a few more laps and we’ll get ‘em tomorrow.

Like Hollingsworth, Simpson also scored his best run of the miniseries, topping his ninth-place finish from last Saturday’s opener.

“We got good there on the bottom, which I’m always pretty decent on the bottom, and got in a rhythm there. And then that (lap-23) caution, it was like the right-rear (tire) didn’t fire,” Simpson said. “I knew (Davenport) would probably be coming up top, but I just (decided) to hold my line on the bottom there. We lost a spot to him on the last lap, but you know, all in all it’s a good night.”

The Wild West Shootout wraps up Sunday with a miniseries-richest $11,000-to-win payday for Super Late Models. DirtonDirt.com’s pay-per-view coverage begins at 3:15 p.m. Mountain Time with hot laps scheduled for 3:30 and racing set for 5.

Notes: Polesitter Rodney Sanders of Happy, Texas, finished ninth. ... Shane Clanton, who entered the night second in Wild West Shootout points, saw his night end with in a fourth-heat rollover accident. The Zebulon, Ga., driver slid under leader Don Shaw on the final lap, but Shaw got into the rear of Clanton’s car in turn four and both pounded the wall with Clanton’s machine barrel-rolling twice onto the frontstretch. It took him a few moments to climb out but he didn’t appear injured. … After several teams argued that a sailpanel Don O’Neal used in Friday's victory was illegal, event co-promoter Chris Kearns apologized to drivers in Saturday’s pre-race meeting for lax tech inspections, promising to be stricter Saturday and Sunday and also vowing to hire an experienced tech inspector for 2017. … Brad Whitfield of Tucson was back in his No. 3 car one night after Lonnie Parker Jr. of El Mirage, Ariz., took a turn behind the wheel. … Brandon Sheppard of New Berlin, Ill., won the Pro Power Racing Engine Dash for non-qualifiers, accepting the $1,000 instead of tagging the tail for the main event.