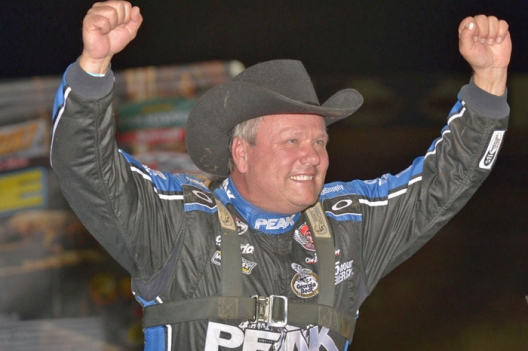 TUCSON, Ariz. — Don O’Neal separated himself from the rest of the Keyser Manufacturing Wild West Shootout competition in a big way at Saturday’s miniseries opener.

By virtue of his 30-lap triumph at USA Raceway, O’Neal stands alone as the only driver in contention for the Keyser Quarter-Million Bonus, which pays $250,000 to anyone who can sweep the six-race winter miniseries.

“It’s not going to be easy for sure,” O’Neal said in victory lane, “but we’ve got one down anyway.”

The fourth-starting O’Neal won a feisty mid-race duel with polesitter Shane Clanton, then pulled away after a string of lap-18 cautions for a $5,000 payday and first victory in Tucson since a 2012 triumph.

Clanton, who led the first 14 laps including a daring move exiting turn four to regain the lead from O’Neal on the 10th lap, ended up sixth amid rugged racing conditions on a cool evening in the desert.

“I had to be up on the wheel out there,” O’Neal said. “I’ve just gotta thank everybody with with this CBR team and Club 29 Race Cars, Peak Motor Oil and just all them guys. That’s what makes it all possible. The first race out this year in this Club 29 Race Car and got the job done.

“After I got the lead there, I just tried to find me a smooth line there and got around there real good. In (turn) two I wasn’t even getting up there and hitting the moisture getting off (the corner) and still drove off real well.”

Francis went by Clanton on the final restart with 12 laps remaining, but he couldn’t keep up with O’Neal on a track, soaked by unusual amounts of rain in the previous days, that provided plenty of challenges.

“This place can make you make a mistake right now,” Francis said. “It’s high speed, and the slick is really slick, and the wet-rough (surface) is really wet-rough, so you gotta kind of make sure you’ve got your car aimed the right way when you go across it. And you’ve gotta pick your spots. You’ve gotta pick where you want to be on the racetrack at the right time.”

Lanigan, who improved five positions to finish third, hopes smoother conditions the rest of the miniseries will help allow him to match the two victories he had last season.

“Starting eighth and getting to third … it wasn’t too bad,” Lanigan said. “The track as awful rough, though. … I’m sure they’ll do a little work on the track and get it smoothed out, so hopefully we’ll be able to race all over this thing.”

The 30-lapper was slowed by four cautions, three of them with the scoreboard stuck on lap 18.

With 12 laps remaining, Tyler Erb pulled up lame in turn four and, on the restart, Kyle Beard did a 360-degree spin into turn three, with everyone remarkably avoiding him until tail-runners Scott Lewis and Morgan Bagley got tangled up.

The next restart also resulted in a mess after bumper tag exiting turn four resulted in Garrett Alberson’s relatively soft rollover into the infield; he wasn’t injured.

The race’s first caution on lap 10 ended the hopes of third-running Dustin Strand, who got into the frontstretch wall exiting turn four.

The fifth-finishing Davenport, one of the favorites to take a crack at the Keyser’s huge bonus, had to overcome a few miscues to even make the main event lineup.

He crossed the line first in the second heat race, but was disqualified when he failed to cross the scales. That put him on the tail of a consolation race, where a first-lap spin nearly ended any chances of making the main event. But he rallied through the tail and caught a break with a late caution, grabbing the second of three transfer spots.

Notes: Besides Davenport’s storyline, the prelims had some other interesting moments. … Don Shaw and Darrell Lanigan banged together down the frontstretch and into turn one while battling for the lead in the fourth heat. Shaw slowed after the contact while Lanigan went on to win. … Multitime Tucson winner Terry Phillips dominated most of the third consy but Garrett Alberson made a four-wide pass amid traffic heading into turn one on the final lap. … Arkansas driver Hunter Rasdon was the third consy’s early leader when his No. R5 went up in smoke, ending his night.