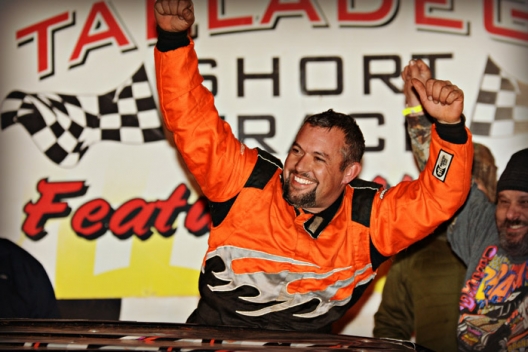 Winning Saturday’s first heat race and starting on the pole of Sunday’s 50-lap main event, Brannon slipped to the second-place position on the start, as Roszell edged ahead from the outside pole to lead the first lap. Running side-by-side with the Ice Bowl XXIV winner, Brannon worked the bottom of the racetrack, assuming control just laps later.

But Brannon’s challenge wasn’t over. Advancing from the fifth starting spot, Hiett quickly worked his way into the top-three. The Alabama driver charged ahead to lead lap 23, with Brannon regaining the point just one lap later. Successfully maneuvering lapped traffic, Brannon held of Donald McIntosh of Dawsonville, Ga., to score his richest career victory in Ice Bowl XXV.

“It’s great to start out 2016 like this with some tough competition like we’ve got today,” Brannon said. “Lapped traffic, it had us worried there at the end. I thought we was going to get in a wreck there. But it’s exciting, an exciting win.”

The Ice Bowl triumph was a hard-earned win for Brannon, who had to outduel two of the Eastaboga oval’s toughest competitors en route to victory lane.

“Tim (Roszell), he had me scared,” Brannon said. “He ran out there on the outside. And that’s not the typical Ice Bowl. Usually you’re riding the bottom. But with the cool and all this rain, he had me worried. And then Jason Hiett, he jumped there on the outside. I thought, “If I can get under these lapped cars and keep them pushed up to the high side, maybe I’ll hold him back there.”

It was difficult for Brannon, a former Winchester (Tenn.) Speedway track champion to put the meaning of his Ice Bowl victory into words.

“It’s a heck of a feeling,” Brannon said. “We’ve been coming down here for probably 10 years running in a Super Late Model show. We’ve been close before, finished third. But man, this is just awesome.”

Advancing from the third starting spot, McIntosh finished second, with Hiett settling for third. Tim Busha of Boaz, Ala., rallied from the 14th starting position to finish fourth, with Ethan Hunter of Chattanooga, Tenn., improving one spot to round out the top five.

“I was actually really impressed with the track,” McIntosh said after Sunday’s feature. “I kind of figured it would be rubbered-up and follow-the-leader all night and kind of a boring race. But it turned out you could kind of pass on it if somebody made a mistake. It was pretty good racing. For the Ice Bowl, I was really happy with it.”

While it might not have been the outcome he was hoping for, Hiett said he was pleased overall with his Ice Bowl weekend.

“It was an exciting race,” Hiett said. “We went soft on tires and I caught them in lapped traffic one time. It just didn’t go my way. But we kind of used our stuff up then and kind of just had to hang on. But we’ll take a third and go on to the next one.”