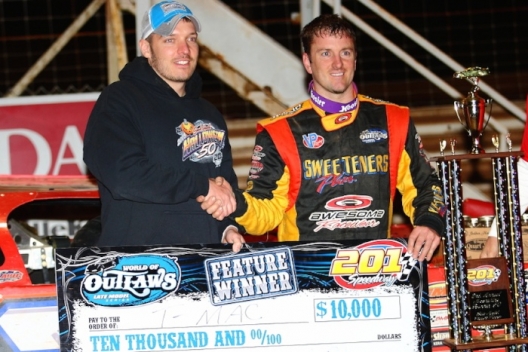 Heath Lawson
Track owner Jarrod Breeding congratulates winner Tim McCreadie.
What won the race: Snapping a near 10-month winless streak on the World of Outlaws Late Model Series, Tim McCreadie of Watertown, N.Y., overtook early leader Chase Junghans of Manhattan, Kan., and seventh-starting Darrell Lanigan of Union, Ky., with a high-side move just past the halfway mark to assume command and led the rest of the way for a $10,000 victory.
Quotable: "I needed a little stick to keep the car activated and keep it down on the right front," McCreadie said of his preferred outside line around the track. "The bottom kind of finally dried up just enough. There was a pretty good ledge to lean into three that probably saved me most of the race."
On the move: Rod Conley of Wheelersburg, Ohio, made a 20th-to-third charge and Clint Smith of Senoia, Ga., advanced from 15th to round out the top-five finishers.
Winner's sponsors: McCreadie's Ann and Carl Myers-owned Rocket Chassis is powered by a Pro Power Racing Engine with sponsorship from Bulldog Rear Ends, Coffey-McCreadie Enterprises, FK Rod Ends, Sweetners Plus and VP Racing Fuels.
Points chase: The second-finishing Lanigan widened his points margin yet again, to 90 points over Rocket Chassis house car driver Rick Eckert of York, Pa., who finished sixth.
Car count: 39
Fast qualifier: Kenneth Howell
Time: 12.834 seconds
Polesitter: Tim McCreadie
Heat race winners: Rick Eckert, Morgan Bagley, Dustin Linville, Darrell Lanigan
Consolation race winners: Steve Casebolt, Shane Clanton
Provisional starters: Frank Heckenast Jr., Kenneth Howell
Next series race: May 17, Smoky Mountain Speedway (Maryville, TN) $10,000
Editor's note: Results and race details are unofficial.
From series and staff reports

McCreadie, 40, of Watertown, N.Y., earned his first World of Outlaws Late Model Series victory of the season after he passed Rookie of the Year contender Chase Junghans of Manhatta, Kan., for the lead halfway through the Moonshine Runner 50 on Friday night at Jarrod Breeding’s 201 Speedway.

McCreadie, who earned $10,675, became the ninth different winner in 11 WoO events behind the wheel of the Sweeteners Plus Rocket Chassis. It was his first WoO triumph since a $50,000 score in the USA Nationals on Aug. 3, 2013, at Cedar Lake Speedway in New Richmond, Wis., and the 26th victory of his career on the national tour.

“The first month of season was pitiful but we’re slowly gaining steam so I’m happy,” said McCreadie, who had only two top-five finishes through the first 10 races of 2014. “There’s lots of time left in the season.”

It was Junghans who jumped out to the lead at the start of the event in his Capital Race Car, outgunning McCreadie. It marked the first time in Junghans’s young career that he has paced a WoO A-Main.

Lanigan, who started seventh, hustled forward to grab second from McCreadie on lap 17 as he bid to continue his hot streak. But McCreadie came to life after a lap-23 restart, regaining the runner-up spot from Lanigan on lap 24 and sliding by Junghans for the lead one circuit later. T-Mac went on to beat Lanigan to the finish line by 0.534 of a second.

“But it seemed like the more I ran the better I felt, and anytime you’ve got Darrell Lanigan behind you, you better cinch ‘em up tight because he’s on a roll. We feel fortunate to finish in front of him tonight.”

McCreadie spent most of the distance with his car perched at the top of the speedway.

“I needed a little stick to keep the car activated and keep it down on the right front,” McCreadie said. “The bottom kind of finally dried up just enough. There was a pretty good ledge to lean into three that probably saved me most of the race.

“I’m just thankful. This is tough to switch cars as much as I have lately and I appreciate everything Warrior (Race Cars) did for me, and I appreciate Mark (Richards of Rocket Chassis) because he’s been really helping. We’ve struggled a little bit and Steve (Baker) and everyone at Rocket has been pushing.”

Lanigan, 43, passed Junghans for second on lap 45 and had McCreadie in sight but couldn’t enough speed to register his third straight win.

“Tim, he's a good racer. He makes me get up on the wheel,” Lanigan said, praising the winner. “We had a good car and just came up a little short.”

Lanigan continued a superlative start to the 2014 WoO season. Not only is he the tour’s only repeat winner with three victories to his credit, he also has four runner-up finishes. Over his last seven series starts he has two wins, four seconds and a fourth-place finish.

The 52-year-old Conley was the race’s big mover, completing his march from the 20th starting spot to third place with a lap-46 pass of Junghans.

“It would’ve been nice (to catch a caution flag after reaching second), but I don’t think I could’ve beat them guys,” said Conley, a WoO winner in 2009 at Atomic Speedway (then K-C Raceway) in Alma, Ohio. “Third’s pretty good. I’ve got a lot of laps down here. I had an idea of what my car would be like if the track slowed down and it worked out pretty good.”

Eight caution flags slowed the event. The first came on lap two when Jackie Boggs of Grayson, Ky., slowed in turn two. The lap-four yellow flag waved after Boom Briggs Bear Lake, Pa., spun on the backstretch and collected several drivers, but he was able to continue. The restart brought out another yellow flag as Brandon Fouts of Kite, Ky., spun in turn four. On lap 14, another yellow flag waved as Derek Fisher of Olympia, Ky., and Brandon Kinzer of Allen, Ky., got together in turn four. On lap 23, Chub Frank of Bear Lake, Pa., stopped at the bottom of turn three with an overheating car. The sixth yellow came on lap 33 as Fouts again spun in turn four, and on the restart Fouts spun in the same spot and was sent pitside. The final yellow waved on the 43rd lap when Briggs spun in turn four.

Notes: The track experienced a power outage during the Late Model feature's pace laps. The program was delayed for roughly 20 minutes before the lighting was restored. ... The start of the racing program was also delayed slightly by lingering rain showers. … Dustin Linville of Lancaster, Ky., moved from the eighth starting spot to fifth just five laps into the A-Main, but he effectively fell from contention for a top-five finish after brushing the turn-four wall on lap 10. … Rick Eckert of York, Pa., pushed the Rocket Chassis house car to second place early in the event but faded during a long green-flag run and finished sixth. … Stephen Breeding of Isom, Ky., who finished 12th, earned the $500 WoO Bonus Bucks as the highest-finishing driver who had never won a WoO A-Main and wasn’t ranked among the top 12 in the tour’s points standings. … The event kicked off a tripleheader weekend for the tour, which made its sixth trip to Kentucky and first to the eastern half of the state.