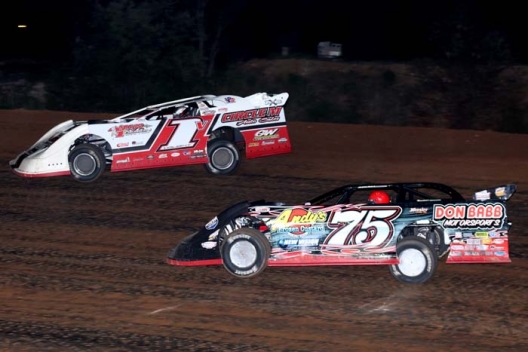 Ron Mitchell
Terry Phillips (75) stalks Will Vaught (1v) before making his lap-16 pass.
What won the race: Winning a race honoring a long-time sponsor, Terry Phillips of Springfield, Mo., won his second hometown MARS race of the season in the eighth annual John Kuntz Memorial. Phillips started third and took the lead from polesitter Will Vaught of Crane, Mo., on the 16th lap. Brandon Morton of Coweta, Okla., ended up second after Vaught suffered a flat tire on the white-flag lap.
Quotable: "We was racing there side-by-side for quite a while, and I got under him, and he kind of cut down on me a little bit, so I got beside him, and I came up a little," Phillips said of his battle with Vaught. "Just good hard racing there. It was pretty fun."
Key notes: The eighth annual John Kuntz Memorial was presented by Andy's Frozen Custard, the business Kuntz founded which has been a long-time sponsor of racing, particularly with Phillips. ... A six-time MARS champion, Phillips also won the tour's first visit to Springfield on March 22. It was his series-leading 84th career triumph and his fourth overall win of 2014. ... The Missouri tour returns to Springfield for the final time on Sept. 13.
Winner's sponsors: Phillips drives a Hatfield-powered Rocket Chassis sponsored by Andy's Frozen Custard, Champion Brands, Don Babb Motorsports, Integra Shocks, Keyser Manufacturing, Mesilla Valley Transportation and New Vision Graphics.
Points chase: A fifth-place finish kept reigning MARS champion Tony Jackson Jr. of Lebanon, Mo., atop the points standings with a 29-point edge over Justin Asplin of Birch Tree, Mo.
Car count: 21
Polesitter: Will Vaught
Heat race winners: Brandon Morton, Will Vaught, Brandon McCormick
Next series race: May 25, Monett Speedway (Monett, MO) $3,000
Editor's note: Results and race details are unofficial.