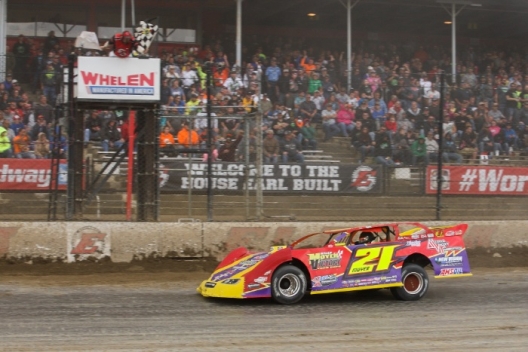 Moyer, who failed to make the starting lineup for one of Thursday’s feature events, fought back late-race challenges from Mike Marlar, sliding ahead of the Winfield, Tenn., driver in the final laps to pick up a win at the famed half-mile oval.

“I knew he’s elbows up on the gas, Mikey is,” Moyer said in victory lane. “We bent that darn nose up with 10 to go or so or something and we didn’t have no where near the same car after that. So I was just hanging on. It wouldn’t turn and I was up there playing with the pedals just trying to get around there and get to the checkered flag.”

Charging from the eighth starting spot, Marlar slid past Moyer to momentarily take the lead on lap 19, finishing second after a hard-fought battle for the win.

“I guess I didn’t see the checkered right there we was racing so hard,” Marlar said after the race. “But heck of a race. My Capital Race Car is really, really good. Ronnie Delk, my car owner, Cornett Engines and all my help … Josh Davis, Jerry (Sprouse) and Colby (Sexton), just really good help and good effort.”

Finishing behind Marlar in the third-place spot was fifth-starting Shannon Babb of Moweaqua, Ill. Continuing to string together solid finishes, Don O’Neal of Martinsville, Ind., advanced from the 12th starting position to finish fourth. Dream XXI winner Jonathan Davenport of Blairsville, Ga., rallied from the 20th starting spot to round out the top five.

After leading the first two laps, the second-starting Henry was shuffled out of contention when Don O’Neal slid underneath on a restart, squeezing Henry as drivers scrambled to catch Moyer. Along with O’Neal and Davenport, four-time World 100 winner Scott Bloomquist of Mooresburg, Tenn., was among other drivers advancing through the field, improving from the 16th starting spot to finish seventh.

The first yellow flag waved on the second lap when Josh Richards and Kent Robinson tangled in turns three and four. Tim McCreadie drew a caution on the ensuing restart when he spun in turn two. The race was stopped by a red flag on the sixth lap when Josh Richards rolled his No. 1 machine, landing upside down in turn one; he climbed from the car uninjured.

Kent Robinson was pleased with his victorious performance in the first heat. “With a cushion like that, I haven’t felt that good here in a while,” said Robinson, who won a preliminary feature during the 2014 Dream. “Hopefully they can get the top to slow down a little, but I think that’s the hand we’re dealt this afternoon. I think it’ll be different tonight.” … Third-heat winner Josh Richards chased Eldora rookie Gordy Gundaker around the cushion until finally taking advantage of a Gundaker slip to surge into the lead. “The top is definitely the preferred line,” Richards said. “Gordy was doing a good job, but he pushed getting into three and I had a run so I had to take it.” … Dan Stone saw his weekend end after a Heat 3 incident ruptured the fuel cell of his car. ... Ohioan Jon Henry was feeling very good after winning the fourth heat over the top three drivers in the current DirtonDirt.com power rankings: Shane Clanton, Scott Bloomquist and Jonathan Davenport. “Wow,” Henry said. “I held my breath the whole time. I almost passed out — I’m glad it was only eight laps.” … Davenport was never a factor in the fourth prelim after sustaining a bent nosepiece on the opening lap; in fact, Davenport’s car snapped sideways on his first pass through turn four because his car’s steering was hindered by the damage. He was off the pace the remainder of the event but held on to finish fourth, nearly a straightaway behind third-place Bloomquist. … Billy Moyer Jr. led the whole way to win the fifth heat, but he had his hands full wrangling his car around the top side of the track. “That cushion’s treacherous,” said Moyer, who also battled handling problems after bending under the nose of his car. “You can’t rest.”

Charging around the outside, second-starting Billy Moyer Jr. led the first lap, with Charlie LaPlant hitting the wall in turns one and two to draw a caution. Moyer held off challenges from Chris Madden to win the fifth heat. Jimmy Owens slid past Madden in turns three and four on the final lap to take the runner-up spot, with Madden grabbing the third and final transfer spot.

Polesitter Jon Henry led the opening lap, with Jonathan Davenport tagging the wall to slip back to fifth. Henry held off a charging Shane Clanton to win the fourth heat, with Clanton finishing second. Scott Bloomquist finished third to transfer to the feature, with Davenport running fourth.

Fourth-starting Josh Richards charged to the front of the field on the opening lap, with Dan Stone spinning in turn two to draw a caution and a complete restart. Second-starting Gordy Gundaker jumped to the front of the field as the green flag waved a second time, with Richards sliding to the lead on the sixth lap. Eddie Carrier Jr.  edged Gundaker for the runner-up spot, with Gundaker grabbing the third and final transfer spot.

Polesitter Kent Robinson charged to the lead at the drop of the green, with third-starting Devin Moran moving into the second-place spot. The top-two cars pulled away from the field, with Vic Hill holding on to the third-place spot to transfer to the feature. Tim McCreadie slipped past Chris Ferguson to run fourth, with Ferguson rounding out the top five.

Jonathan Davenport and Scott Bloomquist — the main players in June’s Dream — start side-by-side in the second row of the fourth odd-group heat. … Earl Pearson Jr. caught the cushion during time trials, bending the right-front corner of his Dunn-Benson Racing machine. His crew quickly repaired the damage. … Brian Ledbetter slowed with a broken transmission during time trials. His crew said they have a spare and plan to install it. … Mack McCarter lost a driveshaft crossing under the checkered flag during his time-trial laps.

Chris Ferguson flashed his qualifying prowess (he’s set 17 fast-times this year), setting a new track record of 14.866 seconds during the first group. The lap held up as the overall fastest circuit of the 106-car qualifying session.

“I wasn’t really sure where I needed to be on the track,” said Ferguson, who eclipsed Jared Landers’s standard of 14.922 seconds that had stood since June 10, 2011. “A lot of guys were running around the bottom at the start of hot laps and then they started going to the top, so I just went right in the middle.”

The young standout with 11 victories this season had one obvious word when asked to describe the track surface: “Fast.”

“It’s all you can get out there,” added Ferguson, who registered his fourth track record of 2015. “I didn’t come off the mat for two laps.”

Prelims beginning Saturday morning, combined with Thursday’s preliminary results, will set lineups for Saturday’s heat races, which are scheduled for 7 p.m. …. Prelims will be made up of hot laps, group time trials, 12 heat races, four consolations and a pair of 25-lap features. … There is a minor amendment to the groups posted Friday for the prelims. Rick Rickman of Columbus, Miss., was shifted to the second group from the seventh group, moving a handful of drivers into different groups for time trials (the track is using the incorrect lineups for hot laps, but drivers such as Scott Bloomquist and Josh Richards will be among these moving into different groups for qualifying). … Mostly overcast skies greeted early arrivals this morning as hot laps began about 11 a.m. … The track crew worked long and hard to whip last night’s soupy surface into shape with some of the pack trucks logging as many as 204 miles over seven hours. … Drivers will be gunning for the 14.922-second track record of Jared Landers, a mark set June 10, 2011 for the $100,000-to-win Dream.

Three drivers apiece from each of consolation race will fill out each 24-car starting field. The first three rows of each preliminary feature will line up heat winners inverted by qualifying time.

Day-long rain that soaked Eldora postponed Friday’s preliminary program to Saturday morning, setting up a doubleheader that will be capped by the weekend’s $48,000-to-win main event.

Gates are scheduled to open at 10 a.m. Saturday with hot laps set for 10:30 a.m. for the split-field program that, combined with finishes from Thursday’s event, will set the lineups for the 7 p.m. heats Saturday night preceding the 100-lapper. Details about the makeup program will be announced Saturday.