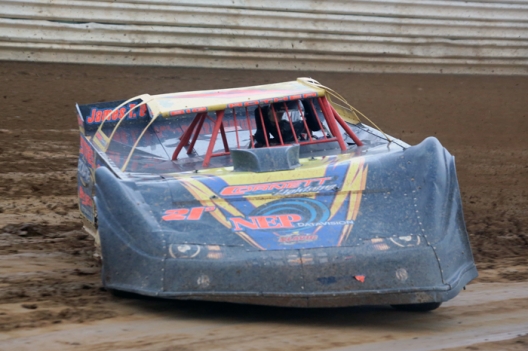 Barry Lenhart
Dan Stone (21d) led the 35-lap feature from flag-to-flag.
What won the race: Dan Stone of Thompson, Pa., survived challenges from Matt Cochran of Williamsport, Pa., and Steve Campbell of Danville, Pa., to score a flag-to-flag victory in the 35-lap Three State Flyers feature.
Quotable: "This place and Williams Grove (Speedway in Mechanicsburg, Pa.) are kind of like special places to go because they have a lot of nostalgia," Stone said. "To get a win at a place like this is cool."
On the move: Dylan Yoder of Selinsgrove, Pa., finished fifth after starting 18th and being forced to restart at the rear of the field due to his involvement in an original-start tangle.
Winner's sponsors: Stone's Cornett-powered Rocket Chassis is sponsored by Stone's Excavating, NEP Wireless and O'Hara Construction.
Points chase: With a win and a fourth-place finish in the first two Three State Flyers events of 2014, Dan Stone jumped out to the early lead in the points standings over Kenny Pettyjohn, who collected finishes of second and fourth.
Car count: 24
Heat race winners: Jeff Rine, Steve Campbell, Tony Adams
Next series race: May 23, Bedford Speedway (Bedford, PA) $4,000
By Kevin Kovac
DirtonDirt.com senior writer

SELINSGROVE, Pa. (May 3) — When it came time to turn up the wick, Dan Stone had the reserve speed necessary to hold on and win Saturday night’s Jeff’s Auto Body & Recycling 35 at Selinsgrove Speedway.

Stone, 36, of Thompson, Pa., led the entire distance after starting from the pole position, but he had to survive challenges from Matt Cochran of Williamsport, Pa., and Steve Campbell of Danville, Pa., to secure the $3,000 top prize in the half-mile oval’s first-ever Trick Shot Three State Flyers Series event.

In a race that was red-flagged for 1 hour, 10 minutes due to a brief shower that struck moments after the original start, Stone pulled away from Campbell over the final circuits to defeat the 50-year-old Selinsgrove regular by 1.303 seconds.

Outside polesitter Andy Haus of Hamburg, Pa., finished third, Kenny Pettyjohn of Millsboro, Del., was fourth despite running the last five laps without brakes and Dylan Yoder of Selinsgrove, Pa., placed fifth after starting 18th and being forced to the rear of the field due to his involvement in an opening-lap tangle.

Stone earned his third career Three State Flyers victory and sixth career triumph at Selinsgrove — the track where he won his first-ever open-motor Late Model feature more than a decade ago — by running the historic speedway’s testy outside line just hard enough to stay in front.

Both the 21-year-old Cochran and Campbell were able to pull alongside Stone, but neither driver was able to pull ahead to lead even a single lap. Cochran saw his strong bid effectively snuffed out just as he began pressuring Stone on lap 21 because he clipped the inside guardrail between turns three and four and damaged his car’s left-front nosepiece, while Campbell ducked underneath Stone on consecutive circuits following a lap-26 restart but lost ground over the remaining tours.

“I saw them under me so I knew I had to pick up the pace a little,” Stone said of the threats he faced. “The cushion was just treacherous so I didn’t want to run any harder than I had to and jump it and screw up, but I could run it harder if I needed to.

“Those last five laps actually went really well. I got back up on that cushion and ran harder, and I never did screw up or push.”

Stone felt his luck drawing the pole position was ultimately the key to his successful outing.

“That probably won the race for me,” said Stone, who drove his family-owned Rocket car with a Cornett engine under the hood. “Being on the inside of the track was definitely an advantage when the race restarted (after the rain delay), so I was able to get out to the lead. My car was good, but if I had to race with somebody, the track was just so fast it was hard to pass. I don’t think I could’ve run the bottom like (Cochran and Campbell) were at that speed.”

The victory was the first of 2014 for Stone, who had been struggling to find his rhythm before running the Three State Flyers tour’s season-opening doubleheader at Selinsgrove and Friday night at Bedford (Pa.) Speedway. He advanced from the 19th starting spot to finish fourth in Bedford’s 35-lapper the previous evening.

“It’s nice to get a win after we had a good run last night,” said Stone, who ended the weekend as the Three State Flyers Series points leader. “Maybe we’re gonna start turning things around here.”

Campbell, who started fourth in his Rocket machine, inherited second place on lap 26 when a caution flag was thrown for debris (a piece of Cochran’s nosepiece) and Cochran pitted moments later with a flat right-rear tire. The veteran pressured Stone when the race restarted but his speed didn’t last.

“We’re not really sure whether we pushed the right-front tire off or something,” said Campbell, a two-time Selinsgrove Late Model champion. “After the caution I could turn it real good with three-wheel brakes and I could run with Dan. One time I thought I was gonna get him, but I think the only way I was gonna get him was with a little contact and that’s not the way Dan races and it’s not the way I race so that wasn’t gonna happen.

“Then, the longer we went, I just couldn’t turn it in the corner and stay on the gas. Dan just got out there a little bit. I just kept getting tighter and tighter the longer we went green. I guess I would’ve liked to seen a caution with two to go.”

Campbell stopped by victory lane to congratulate Stone, a driver whom he holds in great regard.

“Dan’s a really nice guy and his family is great people,” Campbell said, “so if we can’t win it’s great to see him win it.”

Cochran did not return to the race after pulling into the pits during the lap-26 caution period. He settled for a disappointing 19th-place finish after appearing capable of steering his Rocket mount to victory — just 24 hours after leading laps 1-13 and finishing fifth at Bedford.

“I tried to use the whole racetrack to catch Dan Stone and got the inside wall (on lap 21),” said Cochran, who managed to remain within a couple car lengths of Stone for the ensuing five laps despite having his car’s left-front bodywork flapping wildly. “I’ve done it a time or two here before.”

In the final analysis, however, Cochran probably wouldn’t have made it to the finish even if he had avoided the scrape with the wall and passed Stone for the lead.

“Somebody got into me in the (right-rear) quarter-panel early in the race and the body was slowly rubbing on the tire,” Cochran said. “The tire finally went there at the end.”

Three caution flags dotted the event, including the original-start tangle in turn two involving Dylan Yoder and Pancho Lawler of Glenville, Pa., that was followed by a red flag for rain and a lap-16 slowdown for Jim Bernheisel of Lebanon, Pa., stopping in turn two.

Notes: Stone’s previous Three State Flyers victories came on Sept. 9, 2010, at Hagerstown (Md.) Speedway and July 4, 2013, at Hesston (Pa.) Speedway. … Nine-time Selinsgrove champion Jeff Rine of Danville, Pa., relinquished third place with two laps remaining when his car’s engine flattened out, forcing him to shut off the powerplant. ... The cars driven by Pettyjohn and Jason Covert of York Haven, Pa., also sustained bodywork damage in the turn-two incident on the original start, but the rain delay allowed them to make repairs. … Randy Croop of Berwick, Pa., was the only entered driver who was unable to start the feature. ... With rain threatening the event — winds picked up and light precipitation began falling during hot laps — officials scrapped time trials and aligned heat races by draw to save time.