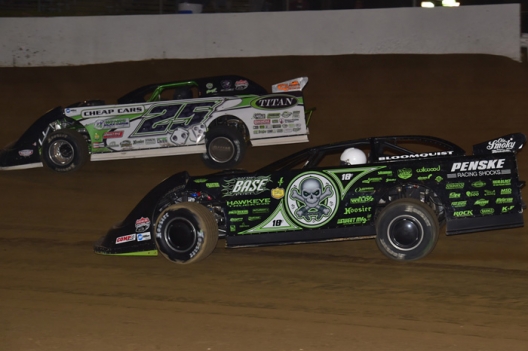 The Bloomington, Ill., driver started outside the front row and fought off the challenges of Scott Bloomquist, Billy Moyer and Jimmy Owens for a $10,000 payday.

Owens, the Newport, Tenn., driver who moved up to third in series points, finished second while while Bloomquist, running third on the white-flag lap, lost a top-five finish when fuel pump problems forced him to the infield. Steve Francis of Ashland, Ky., inherited the third spot ahead of Clint Bowyer Racing teammate and series points leader Don O’Neal of Martinsville, Ind. Leading Dunn-Benson Ford Rookie of the Year contender Jason Hughes of Westville, Okla., rallied from his 21st starting spot for his first career top-five finish in the series.

Feger was glad to rebound from a couple of subpar performances in his home state earlier in the tripleheader weekend.

“This is one of my favorite tracks as everyone knows,” Feger said. “We were not very good the last two nights and our confidence was shaken, but we went to Jason Riggs's shop and rescaled the car and worked on it. We came out tonight and the car was flawless. I didn't know how much right rear tire I had left. I used it up pretty hard out there. When I saw Billy (Moyer) slow with a flat, I was just hoping ours would hold out.”

Moyer fell from contention with his lap-32 flat tire and Owens stormed passed Bloomquist on lap 35 and chased Feger the remaining 15 laps. Owens gave it all his car could muster, but Feger was able to hold his line and keep his car out front.

"We had a good car tonight, we freed it up from last night and it seemed to handle better,” Owens said. “We haven't run here all that much in the past, but I really like the track. It has wide sweeping corners and it definitely is a momentum track.”

Owens survived a first-lap skirmish along with Francis. Brian Birkhofer was also part of the mess and ended up with a flat tire on the next attempted start. Francis was glad to be around at the finish.

“I don't know what happened to (Bloomquist) when he slowed and pulled down low,” Francis said. “We were fortunate to get third and Don had a good finish behind us. Our car was running hot there near the end, but it was a good points night, and we will get ready for La Salle in a couple of weeks.”

Notes: Feger’s first series victory came last summer at Hamilton County Speedway in Webster City, Iowa. … Brandon Sheppard went to a backup car after time trials because of motor issues in his primary entry; he failed to make the feature. ... Randy Weaver of Crossville, Tenn., entered the weekend as a top rookie contender, but he didn't make the trip to stay with his father, who was scheduled to undergo pancreatic surgery Friday in Knoxville, Tenn. ... The 3/8-mile oval, co-owned by Bob Sargent, Ken Schrader, Tony Stewart and Dale Earnhardt Jr., is promoted by Ronnie and Sandy Mason in 2014. … Besides Sheppard, among drivers failing to make the feature lineup: Randy Sellars, Tim Brown, Eric Hickerson, Jarryd Holshouser, Bub McCool, Charlie LaPlant and Chris Shelton.