Information provided by: Staff reports (last updated May 3, 11:19 am)
Bloomquist leads all the way for Tri-City victory
Spring Spectacular 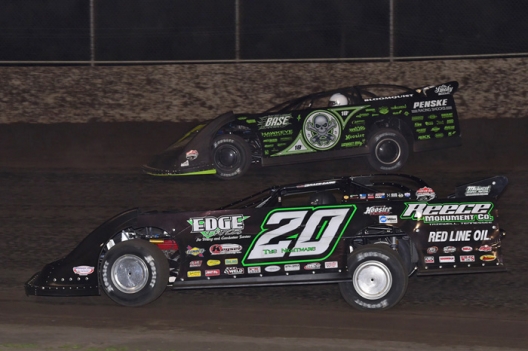 The 50-year-old star was only challenged a few times by runner-up Jimmy Owens of Newport, Tenn., en route to his second win in the last three Lucas Oil events. He previously was triumphant on April 5 at ArkLaTex Speedway in Vivian, La.

Bloomquist righted his team’s ship at the 3/8-mile oval, roaring back after finishing one lap down in the previous evening’s event at the fifth-mile Macon (Ill.) Speedway.

“Our Sweet-Bloomquist car has been strong all year long,” said Bloomquist. “We struggled a little last night, but tonight was a different story.”

Bloomquist started on the outside of the front row and held a steady advantage for the entire race.  Owens pulled close a couple of times after restarts but could not maintain the pace that Bloomquist set.

“With the rain they had this week the track was pretty good,” said Bloomquist. “There were some rough patches in (turns) three and four…I tried to go above them but didn’t want to lose my momentum. I saw Jimmy once and that really got me going.

“It has been awhile since we have won here,” he added. “(Promoter) Kevin (Gundaker) and everybody here does a great job with this track. They have built a nice facility here.”

Korte, in his final year of driving, came into the event as the track’s current points leader.  The race’s eighth starter worked his way past Earl Pearson Jr. of Jacksonville, Fla., and O’Neal when Pearson broke on lap 34 to gain control of third.

Notes: Bloomquist recorded his 48th career Lucas Oil victory — tops on the tour’s all-time win list. … Bobby Pierce of Oakwood, Ill., who won the previous night’s Lucas Oil event at Macon, started 11th and made it up to third before slapping the turn-three wall on the 27th lap to end his bid. The 17-year-old Pierce had been pressuring Owens for second when his solid run came to an abrupt halt. … Shannon Babb of Mowequa, Ill., went up in smoke to draw a lap-21 caution; Jimmy Mars of Menomonie, Wis., spun on the frontstretch on the ensuing restart and collected Bub McCool of Vicksburg, Miss. ... Billy Laycock of Marine, Ill., started the event in Jason Feger's No. 25 machine; he was the first retiree. ... Dennis Erb Jr. of Carpentersville, Ill., and Craig Smith of Godfrey, Ill., tangled while battling for a transfer spot in the final consolation race. Smith ended up facing the wrong way and retaliated by ramming the front of Erb’s machine and later rushing from his car to confront Erb in the cockpit on two different occasions. Smith was disqualified from the remainder of the evening’s action by Lucas Oil officials for “action unbecoming of a competitor.” ... Rickey Frankel of Quincy, Ill., went up in smoke and retired while running second in the second heat race. ... Aaron Heck of Mount Vernon, Ill., won the Crate Late Model feature. ... The Lucas Oil Series returns to Tri-City on July 11.