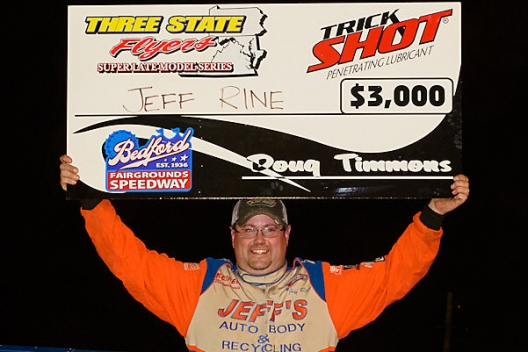 Jason Walls/wrtspeedwerx.com
Jeff Rine of Danville, Pa., shows off his big check at Bedford.
What won the race: Jeff Rine of Danville, Pa., took the lead from Matt Cochran of Williamsport, Pa., on the 14th lap and held it for the final 21 laps to win the Three State Flyers season-opener by a straightaway margin.
Quotable: "I run with that kid at Selinsgrove every week," Rine said of Cochran. "He had a good run going, but we were a little better on the bottom."
On the move: Dan Stone of Thompson, Pa., charged forward from the 19th starting spot to finish fourth.
Winner's sponsors: Jeff Rine's MasterSbilt by Huey car is powered by a Hershey's Racing Engine and carries sponsorship from Jeff's Auto Body, Metzler Auto, Truck & Trailer and Jack White Signs.
Points chase: Rine jumped out to the points lead, but he does not plan to chase the tour's championship.
Car count: 34
Polesitter: Jim Yoder
Heat race winners: Jeff Rine, Kenny Pettyjohn, Jason Covert, Matt Cochran
Consolation race winners: Dylan Yoder
Next series race: May 3, Selinsgrove Speedway (Selinsgrove, PA) $3,000
Editor's note: Results and race details are unofficial.
By Kevin Kovac
DirtonDirt.com senior writer

BEDFORD, Pa. (May 2) — Jeff Rine had one thing to tell the crowd after flashing under the checkered flag first in Friday night’s 35-lap Coffee Pot Classic at Bedford Speedway.

“This one’s for Huey,” said the driver from Danville, Pa.

Rine, 36, dedicated his $3,000 victory in the season-opening event for the Trick Shot Three State Flyers Series to the late Huey Wilcoxon, the owner of the Martinsburg, W.Va.-based MBH Race Cars shop whose death on April 18 shocked the Dirt Late Model community.

“Huey and I were pretty good buddies,” said Rine, whose winning Eldin Racing No. 92 was a MasterSbilt by Huey machine. “He did a lot for me over the last three years and we became close friends, so it’s a real tough loss.”

Rine dominated the event, driving away from the field after passing and fellow Selinsgrove (Pa.) Speedway regular Matt Cochran of Williamsport, Pa., for the lead on lap 14. The former Bedford track champion cruised across the finish line nearly a full straightaway ahead of Millsboro, Del.’s Kenny Pettyjohn, who secured second place from Cochran on lap 23 but gained only a minimal amount of ground on Rine over the remaining distance.

Third place was claimed by seventh-starter Jason Covert of York Haven, Pa., who holds the Three State Flyers Series record for most championships (three) and wins (18). He secured the final podium spot for good when he overtook Cochran on lap 27.

Dan Stone of Thompson, Pa., advanced from the 19th starting spot to finish fourth after making a last-lap pass of the 21-year-old Cochran, who settled for fifth after starting from the outside pole and leading laps 1-13 in his first-ever Super Late Model start at Bedford.

Rine’s triumph — his second consecutive and the 14th of his career at the sprawling half-mile Bedford oval — came after he calmly chased Cochran early in the race. He finally made his decisive pass for the top spot using the inside lane off turn four.

“I was real good around the bottom and I felt the top was gonna go away so I didn’t want to burn my tires up too much in the beginning trying to pressure him,” said Rine, who started third and burst into second place on a lap-one restart. “I just kept doing what I was doing and I guess he couldn’t stay on the bottom like I could.”

With the race running caution-free from lap nine to the finish, Rine built a commanding edge that only a slowdown in the action could erase.

“My dad was giving me signals (from the infield),” Rine said. “I knew I had a big lead, but I tried to keep a steady pace because I knew lapped traffic was gonna come into play and I wanted to make sure I had enough room when I got to it.”

Rine also had no desire to see the race last any longer than necessary. With thoughts of Wilcoxon dancing through his head, he just wanted to reach victory lane to honor his friend.

“It was a little emotional,” said Rine, who might have been the last person to talk to Wilcoxon by cell phone before Wilcoxon suffered an apparent fatal heart attack and crashed into a guardrail near La Plate, Md., late on April 18. “It’s neat to win tonight for him. The engine started making some noise, but I said, ‘Come on, I just want to get to the finish as fast as I can.’”

Pettyjohn, 46, had an eventful march to runner-up money in his Brian Donley-owned Rocket. The race’s fifth starter reached third on lap 10, ceded the spot to Covert on lap 17 when he got out of shape in turn four and regained the show position from Covert on lap 22.

“I was running up on the berm and I was really good on it,” said Pettyjohn. “But running there was a chance I was taking and one lap (the 17th) it dug in. I pretty much spun out, but I was able to keep going.

“I think we had a good enough car to have a shot at winning, but by the time we got to second the leader was so far out I could barely see him. I was hoping for a caution, but then I got to thinking that a caution might not work for me because I went pretty soft on tires.

“I’m just happy to run the way we did,” he added. “This track’s not one of my favorites, so I’m pretty tickled to run second.”

Three caution flags slowed the event. Defending Bedford champion Matt Parks of Three Springs, Pa., brought out the first on lap one due to a blown right-rear tire and stopped again on lap five, while Justin Kann of Hesston, Pa., stopped in turn two on lap nine.

Notes: Rine’s victory was the second of his career on the Three State Flyers tour. His first was on July 3, 2011, at Hesston (Pa.) Speedway. … Rine was also impressive in qualifying, coming from the eighth starting spot to win the evening’s first heat race. .... Dylan Yoder of Selinsgrove, Pa., who won Bedford’s season opener on April 21, lost a transfer spot on the last lap of the third heat when both Gregg Satterlee of Indiana, Pa., and Stone slipped past. … No time trials were run; heat-race lineups were set by draw. ... Temperatures dipped into the 40s so officials pushed the show along for fan comfort. The Late Model feature ended just before 10 p.m. ... The event opened the season for the Three State Flyers Series after an April 12 event at Hagerstown (Md.) Speedway was canceled.