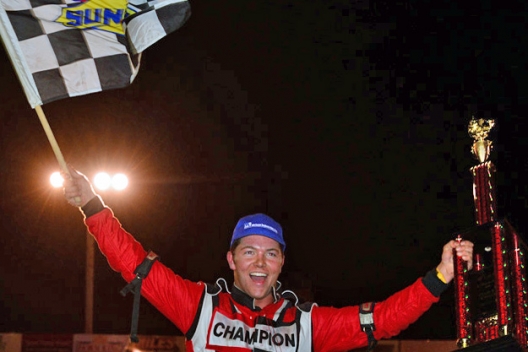 Rick Schwallie/rickschwalliephotos.com
Bobby Pierce dominated for $12,000 at Macon Speedway.
What won the race: Starting outside of the front row, 17-year-old Bobby Pierce of Oakwood, Ill., jumped to the lead at the outset and held it for the entire 100-lap distance to score his second Lucas Oil victory of the season.
Quotable: “It’s a hard thing to do on a track like this is to calm down, because when you do that, that’s when you start making mistakes. So it’s the hardest thing to be because you can’t calm down at all — you’ve gotta give it 100 percent the whole time,” Pierce said. “I’m just glad we were able to hang on. I abused that right rear pretty hard, and I’m glad it all stayed together. Hat’s off to the crew for that, and everything stayed on.”
On the move: After suffering a flat tire on the final lap of the third heat race while running second and taking a provisional, Jimmy Owens of Newport, Tenn., rallied from 24th to nip Eddie Carrier Jr. of Salt Rock, W.Va., for fourth at the line.
Winner's sponsors: Pierce muscles a Bob Pierce Race Car with a Pro Power Racing Engine and sponsorship from Champion Spark Plugs, M&M Painting and Construction, Murphy Trucking, Petersen Aluminum and the Pierce Posse.
Points chase: Don O'Neal's early Macon retirement cut into his points lead, tightening up the top five. O'Neal has 1,485 points followed by Steve Francis (1,470), Eddie Carrier Jr. and Earl Pearson Jr. (1,450) and Jimmy Owens (1,365), who made up a lot of ground with his rally.
Car count: 31
Fast qualifier: Bobby Pierce
Time: 10.768 seconds
Polesitter: Steve Francis
Heat race winners: Steve Francis, Brian Shirley, Bobby Pierce, Scott Bloomquist
Consolation race winners: Jason Papich, Roger Brickler
Provisional starters: Earl Pearson Jr., Jimmy Owens, Jason Hughes
Next series race: May 3, Paducah International Raceway (Paducah, KY) $10,000
From series and staff reports

The 17-year-old sensation from Oakwood, Ill., continued tearing up his home region’s dirt tracks on Thursday night, romping to a runaway victory in the St. Louis U-Pic-A-Part 100 at Macon Speedway.

Pierce’s triumph was worth $12,000 — the most lucrative checkered flag of his young career and richest first-place prize ever offered at the fifth-mile bullring — and gave him six wins in his last eight starts. It was also his second win of 2014 on the Lucas Oil Late Model Dirt Series, which made its first-ever visit to the venerable Macon facility.

The evening simply belonged to Pierce, who set fast time in qualifying, won a heat race and led all 100 laps of the A-Main to completely sweep the program. He faced some early-race pressure from Brian Shirley of Chatham, Ill., before pulling away to defeat his fellow Land of Lincoln racer by a commanding margin of nearly half a lap.

Steve Francis of Ashland, Ky., finished a distant third in his Clint Bowyer Racing machine, settling for a podium run after starting from the pole position. Reigning Lucas Oil Series champion Jimmy Owens of Newport, Tenn., placed a hard-charging fourth after starting 24th and nearly going a lap down to Pierce midway through the race, and Eddie Carrier Jr. of Salt Rock, W.Va., completed the top five.

Though Pierce made only his second career start at Macon, he brought plenty of confidence into the race thanks to the hot streak he’s put together running at many similarly tight, physical ovals across the Midwest.

“Racing on these little bullrings helps a lot,” said Pierce, who won a UMP DIRTcar-sanctioned feature on another fifth-mile oval, Belle-Clair Speedway in Belleville, Ill., earlier this season. “We came here thinking we were prepared and I guess we were.”

With memories still fresh of Pierce’s solid but still somewhat disappointing third-place finish in the April 26 World of Outlaws Late Model Series Illini 100 at Farmer City (Ill.) Raceway — his father/car owner/chassis builder, Bob, blamed himself for making an incorrect tire choice that might have cost young Bobby a shot at victory — plenty of careful consideration was put into his tire compound selection for Macon’s historic event. Judging by his flawless performance, it apparently was right on the money.

“I was looking at my dad there (in the infield) and he just kept getting wider and wider (with his hand signals),” Pierce said of his ever-growing advantage over Shirley during the 64-lap stretch of uninterrupted green-flag racing that closed the A-Main.

But even as Pierce drove away from Shirley, he stayed on the hammer.

“A hard thing to do on a track like this is to calm down, because when you do that, that’s when you start making mistakes,” said Pierce, whose previous Lucas Oil Series win this season came on Feb. 15 at East Bay Raceway Park in Gibsonton, Fla. “So it’s the hardest thing to do because you can’t calm down at all — you’ve gotta give it 100 percent the whole time.

“I’m just glad we were able to hang on. I abused that right-rear pretty hard, and I’m glad it all stayed together.”

When the checkered flag finally flew, Pierce was as relieved as he was happy about recording the biggest win of his burgeoning career. The up-on-the-wheel track exacted a toll on him.

“Good thing I’ve been working out lately because I am beat up,” Pierce said. “That was a long race. Driving on the cushion like that is hard to do.”

Shirley, 33, started third in the Riggs Motorsports Rocket and grabbed second from Francis on a lap-nine restart. He ran within striking distance of Pierce before losing touch with the leader after the halfway mark.

“It got interesting there in lapped traffic, but then I just got stuck,” said Shirley, who registered his best finish of 2014 on the Lucas Oil Series. “I was trying to get by that 12 car and felt like if we got by we might be able to race (Pierce) a little more, but I just couldn’t maneuver enough.

“We weren’t too bad. Second isn’t the worst thing for us.”

The 46-year-old Francis was steady throughout the distance, holding firm to third place after being overtaken by Shirley on the lap-nine restart.

“Congratulations to Bobby,” Francis said. “He done a real good job. He drove off from me and Brian there at the end.

“Me and (Shirley) were a little softer on tires and kind of married ourselves to the bottom, but third ain’t bad here. If you would’ve told me coming to Macon that I was gonna run third and have no body damage, I would’ve been tickled to death.”

Seven caution flags slowed the 100-lapper, which took about 40 minutes to complete. All of the breaks in the action came during the race’s first 36 laps.

The most noteworthy caution-causing incident was on lap two when Lucas Oil Series points leader Don O’Neal of Martinsville, Ind., was swept up in a turn-two tangle that also involved Dennis Erb Jr. of Carpentersville, Ill., and Randy Korte of Highland, Ill. O’Neal attempted to continue but retired several circuits later, leaving him with a 24th-place finish that sliced his points lead to 15 points over Francis.

Notes: Pierce’s father is a multiple-time past winner at Macon. … Owens’s night started off on a bad note when he suffered a flat tire on the final lap of the third heat race while running second, forcing him to take a provisional. But he came alive midway through the feature when Pierce approached to lap him, rallying to nip Carrier for fourth at the finish line. … Five of the top 10 finishers were residents of Illinois. Joining Pierce and Shirley was Kevin Weaver of Gibson City (sixth), Brandon Sheppard of New Berlin (eighth) and Erb (10th). … Scott Bloomquist, who won Macon’s Herald & Review 100 in 1990, started fourth but faded steadily to finish one lap down in 11th. … Shannon Babb of Moweaqua, Ill., wasn’t a factor driving his Victory Circle car rather than the Rocket mount he steered to victory five days earlier in the Illini 100. He qualified through a B-Main and pulled out of the feature early, finishing 23rd. … The 100-lap feature paid at least $1,000 to each starter. ... Lucas Oil travelers completed only their third event since February’s Speedweeks. ... Pierce’s fellow Oakwood, Ill., native Randy Shuman earned $1,000 for his UMP modified victory on the undercard. … Conditions were cool and breezy, with periodic drizzle falling during the night. … The event kicked off a tripleheader weekend for the Lucas Oil Series, which visits Tri-City Speedway in Granite City, Ill., on Friday night and Paducah (Ky.) International Raceway on Saturday evening.