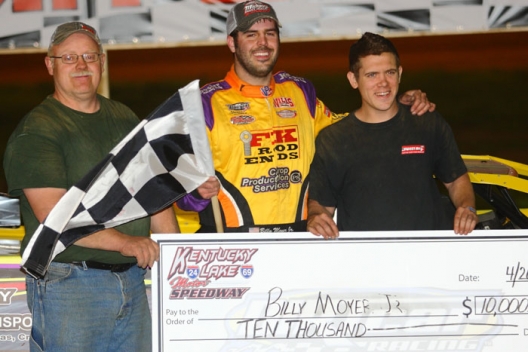 The 26-year-old driver from Batesville, Ark., registered one of the biggest victories of his young career, pocketing $10,000 for a flag-to-flag score in the 40-lap UMP DIRTcar-sanctioned Bluegrass Nationals at Kentucky Lake Motor Speedway.

Moyer’s triumph was his second in as many nights — following a $2,000 Comp Cams Super Dirt Series score on Friday at Camden (Tenn.) Speedway — and provided validation of his impressive start to the 2014 season on the National Dirt Racing League tour. He’s flirted with victory on the national series, leading significant portions of three features already this year.

“This Moyer Xtreme by Longhorn is the best thing I ever sat in,” Moyer said of his winning ride. “I just can’t say enough about Kevin Rumley and that entire Labonte (Longhorn) crew there and my dad and all them guys back at the shop. We definitely got a strong hot rod and they’re gonna have to contend with us this year.

“It’s fun to be up front, especially after we struggled so much last year.”

Moyer bolted off the outside pole to grab the lead at the start of the A-Main and never looked back. He maintained a short edge on eventual runner-up Kent Robinson of Bloomington, Ind., who started from the pole position, to take the checkered flag in the first major Dirt Late Model event since 2009 at Kentucky Lake, which reopened earlier this month.

Randy Korte of Highland, Ill., finished third after engaging in a battle with Robinson that raged for most of the distance. Michael Kloos of Trenton, Ill., placed fourth and Tanner English of Benton, Ky., who won KLMS’s recent season opener, completed the top five.

Moyer was basically in control of the event after the race’s initial start, which saw Robinson surge out to the lead entering turn one, was called back by a caution flag.

“I think he just beat down the front straightaway,” said Moyer. “He done a good job. He’s a clean racer and it’s fun to race with that guy. I got mad respect for their whole crew over there. It would’ve been hard for us to pass him for sure, but I think once we got in open air it showed how strong our ol’ Longhorn was. I’m just glad to get the ‘W.’”

Robinson, another rising 26-year-old who has shown strength on this year’s NDRL tour, settled for his fourth bridesmaid finish of 2014. He recorded two second-place runs in January during the non-point NDRL events at El Paso (Texas) Speedway Park and another in an NDRL points show on April 13 at Winchester (Va.) Speedway.

“We’re kinda getting tired of running second, but it’s a good thing to be tired of I guess,” Robinson said. “Moyer had the best car. Hat's off to him. If that first start would’ve stuck, I had a better jump — I don’t know if he would’ve went around me or not.

“But we were a little softer on right-rear tire than a lot of people did. I started catching him there toward the end at about 10 to go and then I think I just kind of used my left-rear tire up and couldn’t do anything past that.”

Notes: Moyer's only previous $10,000 victory was the June 2012 UMP DIRTcar Summernationals Masters event at Cedar Lake Speedway in New Richmond, Wis. ... A half-dozen or so cautions slowed the action. ... Ten drivers finished on the lead lap and 13 were running at the finish. ... Wendell Wallace piloted Steve Lampley's No. 33. ... Jeff Walston of Paducah, Ky., won the Crate Late Model feature. ... Track conditions were dusty during time trials with a rough surface in turns one and two, but the track was reworked. ... The event, which drew a big crowd, was the third at KLMS since reopening under co-owners Ronnie Jones and James Hale. The partners bought the oval from Sherri Heckenast last year for just under $1 million. ... The track, which originally opened in 1997 after being built by the Greer family, had been dormant since 2009.