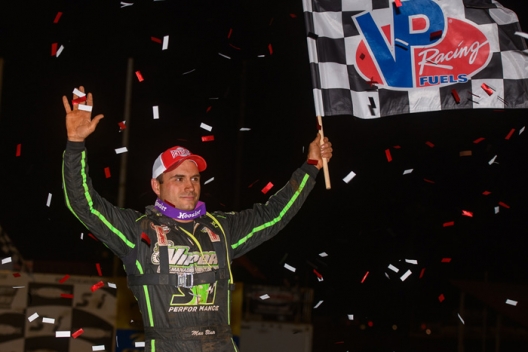 GAFFNEY, S.C. — When the tour's best driver ran into trouble Saturday at Cherokee Speedway, the best World of Outlaws Case Late Model Series rookie was there to capitalize.

Max Blair, the 32-year-old standout from Centerville, Pa., led the final 43 laps of the Rock Gault Memorial for a $20,000 payday, his fourth career WoO victory but first during his full-time rookie season on the national circuit.

Rebounding after getting into the fence in time trials, Blair inherited the lead on the 18th lap of the 60-lap main event when four-time champion Brandon Sheppard of New Berlin, Ill., tangled with a lapped car. Blair kept Ross Bailes of Clover, S.C., in check the rest of the way in capturing his first WoO event since June 25, 2020, at Lernerville Speedway in Sarver, Pa.

In a feature where passing was at a premium most of the way, Blair took the checkers 0.531 of a second ahead of Bailes with Daulton Wilson of Fayetteville, N.C., in third. Hudson O'Neal of Martinsville, Ind., and Cla Knight of North Augusta, Ga., rounded out the top five.

Sheppard, who started outside the front row and pulled away to a comfortable lead over the first 17 laps, ended up 12th after making contact with the rear of Brent Larson's slower car in turn four. Sheppard's Rocket Chassis house car spun to a stop, knocking him out of contention.

Blair, who finished third in Friday's preliminary feature and improved his car's handling Saturday, knew that his victory was made possible by Sheppard's spin.

"I think Brandon probably had us covered there. We had some good fortune on our side there. I hate it for them guys. He was real good," said Blair, who ended up starting on the pole position after scheduled polesitter Daulton Wilson was penalized for jumping the initial start. "But man, this is awesome. We've won a couple of these (WoO) races before, but just around the house. This one feels really good."

Blair suffered his own misfortune in time trials, but his Viper Motorsports team hustled to make repairs.

"The driver ran out of talent in qualifying and stuffed it into the fence," said Blair, whose father and former standout racer Robbie Blair serves as his crew chief. "My dad and Tyler, Jeff, everybody thrashed down there we got got it back together just in time to make it out for the heat race. Like we still had that bent front-end parts, so it's been a mess all day, but boy did this pay off."

While Blair was in control the rest of the way after inheriting the lead, he was hung up in lapped traffic amid single-file racing. He was happy to see a caution "because I got (me) out of lapped traffic and into clean air. And you know, I'm just very inexperienced in this type of racing. So being in clean air without them lapped cars was a big deal," Blair said. "But the next couple (of cautions) that came out at the end, I didn't really didn't want to see them too much."

Bailes settled for a second-place finish, but it came with a nice consolation prize. The event was co-sanctioned by WoO's sister Drydene Xtreme DIRTcar Series and Bailes wrapped up the $15,000 series championship.

"We came here wanting to win the race, but, you know, obviously the points there was in the back of our minds," said Bailes, who drives for Billy Hicks Racing. "We were fast there at the end of the (points season). I wrecked this car at (Golden Isles Speedway in) Brunswick (Ga.) and we struggled at Lavonia (Speedway) and that got us behind. Ben (Watkins) and Carson (Ferguson), man, they put up a battle, and obviously it came down to the wire. But it was a fun deal and we were really good tonight."

While track conditions made passing difficult, "I felt like Max's car went away or either mine came to there at the end," Bailes said. "I wish it would have stayed green and I could've kept pressuring him a little bit and see what happened. But you know, he did a good job and we're just excited to get (the Xtreme title) done."

Wilson hated that jumping the initial start forced him to start third instead of first — "that was critical," he said — but "we're up and coming, but we're gonna keep our head down and keep working. And, you know, we keep running top-three With this crowd, the wins will come.

"Realistically, (driving for Kentucky-based Rattliff Motorsports) just fits me perfect, you know. Like I said, I can't thank James and Justin enough for giving me the reins on this deal and giving me everything I need to go be successful. I don't have to stress about that and that lifts a huge burden on my shoulders where I can focus on making this thing go fast and doing what I need to do behind the wheel."

Including the lap-18 yellow for Sheppard's spin and the first-lap yellow for Wilson's penalty, five cautions slowed the action at the 4/10-mile oval. A third yellow fell on lap 28 for Pearson Lee Williams while two late cautions flew for flat tires for Tanner English (lap 54) and Gordy Gundaker (lap 58).

Notes: Friday's $10,000 winner Michael Brown of Pageland, S.C., a first-time series winner, started 19th and finished 14th Saturday. ... Trent Ivey of Union, S.C., earned the pole for the first heat race, but his night came to an end when he hit the wall on the first lap of the prelim. ... After starting third in his heat race, Josh Richards of Shinnston, W.Va., spun on the first lap and never contended the rest of the night. ... Carson Ferguson of Concord, N.C., was behind the wheel of the No. 42 Longhorn Chassis normally driven by Doug Sanders of Springwood, N.C., after breaking an oil pump in his Bradsher-owned No. 93 on Friday.