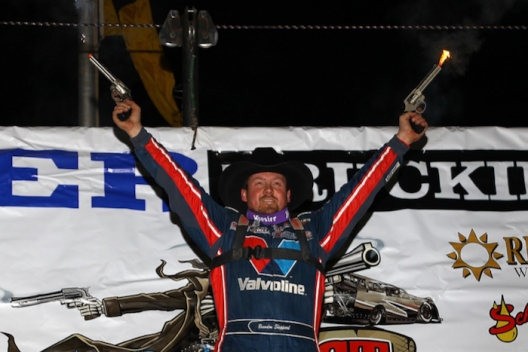 Posting his 15th consecutive WWS top-five finish, the 28-year-old New Berlin, Ill., driver blew past fellow Illinois driver Bobby Pierce on high side on the 14th of 40 laps and cruised to his fifth miniseries victory, earning $5,000 as Vado hosted its first miniseries event.

The four-time World of Outlaws Morton Buildings Late Model Series champion who moonlights in his grandfather's No. B5 when he's not dominating the WoO circuit in the potent Rocket Chassis house car thanked his team and sponsors for the winning ride.

"This is a brand new car, the first race on it," Sheppard said, thanking his uncle Ed Bauman and Chuck Oberreiter for putting the Rocket together. "It's definitely tough out here and we've definitely been putting the work in and we've got a really good race car. So hopefully we can keep it that way all week. I don't know, I've been known to mess it up pretty bad, so hopefully we can just massage on it and just keep improving."

The third-starting Sheppard, who took the checkers 2.987 seconds ahead of the pole-starting Pierce, will now take aim at the Penske Racing Shocks $300,000 Paydirt Jackpot for a six-race sweep. Everyone else must settled for the bonus program's consolation prizes ($100,000 for five victories or $25,000 for four) as the miniseries continues Sunday at Vado before taking a two-day break.

Pierce kept Scott in check early in the race, but when Sheppard grabbed the second spot on the ninth lap, his car's high-side speed was too much for the race-long leader.

"I don't think they told (Pierce) to go to the top yet at that point, and I think I kinda just snuck up on him there. I was getting good runs through (turns) one and two and I kept getting better every time," Sheppard said. "Hat's off to all these drivers out here for racing clean. It was a fun race and definitely a cool deal to be a part off. Glad we got to come (out) here again this year."

Asked if he might have been able to hold off Sheppard if he had switched to the top lane as his pursuer was approaching, Pierce said, "I would’ve had a chance, but … I don’t know. It is what it is. I thought whoever was in second was probably running my line. Obviously he wasn’t, so we gotta get better at that (signal communication)."

Sheppard's only scare came with six laps remaining when backmarker Steve Stultz plotted his retirement to the infield and slowed in front of the leader exiting turn four. Sheppard barely missed a beat in heading to victory lane to get his photo taken with the event's trademark cowboy hat and six-shooters. But taking a poke at a competitor, Sheppard noted that his new car had already been photographed before the 40-lapper began.

"I've gotta give a shoutout to Stormy Scott's guys for taking pictures of this thing before we rolled out for the feature," he said. "I don't know what they were looking at, but they sure were interested in it."

Notes: Brandon Sheppard's last 19 WWS starts include five victories, 18 top-five finishes (his worst finish in that stretch was eighth). ... Sheppard missed last year's action at the now-closed Arizona Speedway near Phoenix because the WoO's opening weekend conflicted at Volusia Speedway Park in Barberville, Fla., in 2021. ... "Man, the track was awesome," Sheppard commented in Vado's victory lane without being asked. "How about that racetrack? That thing was slick top to bottom. You could race all over it. If you've got that all week, we'll be doing pretty good." ... A dozen drivers completed 40 laps and 21 of 24 starters were running at the finish.

The Wild West Shootout kicks off Saturday at its new 2022 home — Royal Jones’s showplace Vado (N.M.) Speedway Park — with wonderful wintertime weather conditions for a track that sits an elevation of over 3,800 feet above sea level. Sunny skies with afternoon temperatures in the mid-60s prevail, though a stiff breeze is blowing. … A field of 31 Super Late Models is signed in, down significantly from the 57.5-car average for last year’s WWS at the now-closed Arizona Speedway outside Phoenix. The shift in location six hours to the east following the closing of the Arizona oval has in particular curtailed representation among Arizona, California and Oregon teams. … With Hoosier tire supply issues still in play as the calendar flips to 2022, WWS officials will permit teams to purchase three new tires per race day (two 1350s and one LM40) and require them to use the same four tires from qualifying through the B-mains. Teams can bolt on one new tire for the feature; flats must be replaced by used rubber. … Matt Curl, the Fairbury (Ill.) Speedway promoter who serves as competition director for the WWS, has brought along his track’s prep supervisor, Chad Bauman, to oversee Vado’s surface throughout the miniseries. Several pieces of Fairbury equipment have also been transported to Vado. … Bobby Pierce of Oakwood, Ill., planned to run a car that sports white-and-red scheme that’s a throwback to his uncle Harold Henk’s 1950s modified, but mechanical trouble he discovered while prepping in the pit area forced him to hastily pull out his backup car. He managed to get on the track in time for qualifying and registered the fastest lap of time trials at 15.947 seconds. … Hall of Fame chassis builder C.J. Rayburn, who passed away on New Years’s Day at the age of 81, is being remembered by several drivers in the field. Among the tributes: Rusty Schlenk of McClure, Ohio, has wrapped his Domination Chassis in the simple white-and-blue look and No. CJ1 that Rayburn used when he competed, while Mike Marlar of Winfield, Tenn., has a small “C.J.” inside his car’s No. 157. … Marlar’s crewman, Josh Davis, is working his first race as a married man following his nuptials last month to former DirtonDirt.com reporter Alli Collis. … Clint Campbell, who has worked as Jonathan Davenport’s tire guy for the past two years, is at Vado starting his new position as a crewman for Stormy Scott of Las Cruces, N.M., after his recent departure from Davenport’s Lance Landers-owned Double L Racing. … Austin Kirkpatrick, a native of Ocala, Fla., who now lives in Concord, N.C., is running at least the first weekend of the WWS in a car fielded by Mercedes Abercrombie of Deming, N.M. His weekend began inauspiciously, however, as he failed to record a qualifying lap. … Ricky Weiss of Headingley, Manitoba, and Cade Dillard of Robeline, La., return to Vado after winning World of Outlaws Morton Buildings Late Model Series events at the track in January 2020. Dillard is debuting a new Black Diamond Late Model and also has a new self-built modified along; Mississippi’s Brooks Strength is driving the modified this weekend before Dillard climbs behind the wheel for at least the Wednesday and Friday events.