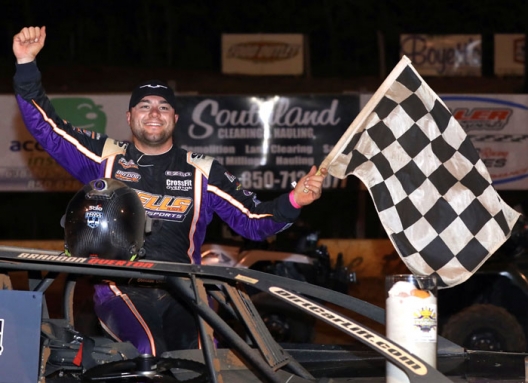 MILTON, Fla. — Brandon Overton has piled up victories on every page of the 2021 calendar during the best season of his career. The 30-year-old Evans, Ga., driver added a November victory — and another $20,000 to the Wells Motorsports coffers — with a dominating performance in the final 48 laps of Southern Raceway's inaugural King of the Sandbox presented by Sweet Victory Apparel.

Taking advantage after Friday preliminary winner Ashton Winger's departure and a mistake in lapped traffic by polesitter and hometown standout Bo Slay, Overton cruised to his 30th victory of the season with a 3.776-second margin over runner-up Max Blair of Centerville, Pa.

It wasn't as easy as it looked, Overton assured the big crowd.

"I'll tell you what, I was sweating bullets before we started this deal. I couldn't qualify on the pole. I kept getting beat and had tough heat races every night. So you just go to Plan B, man. You just gotta sit right there and wait on 'em to make a mistake and capitalize on it," Overton said. "Ashton had bad luck and Bo kind of got in there with those lapped cars. When you're out front you're a sitting duck, and like I said, we just capitalized on it. Once we got out front, our car was back to normal. When you're behind, it's hard to judge anything because the track's so dirty and you feel like crap no matter what you do. It just all worked in our favor."

Blair and Slay completed the podium positions while prerace favorite and another hometown driver, Joseph Joiner, settled for fourth but never contended. Ryan Crane of Panama City Beach, Fla., rounded out the top five and Robbie Stuart was the only other driver completing 60 laps in the attrition-battered field.

Slay was impressive in controlling the races first dozen laps, but exiting turn four on lap 13 he got hung up briefly when he made contact with a slower car and Overton pounced, zipping past in the inside groove for a lead he'd never give up.

"It sucks leading, especially when you're got a bunch of good cars behind you. You really (can make) just one little mistake, like you (saw), and you lose 20-grand. Been there, done that. Hell, it happens. That's why it's called racing."

Blair dropped Slay to third on the 18th lap but never made a serious bid for the lead.

"You run second to that guy, you can't be too mad at anything, that's for sure," Blair said of Overton. "We really struggled when we unloaded on Thursday. To be as bad as we were when we unloaded to come out of there with a third (Friay) and a second (Saturday), I'll take that all day long."

The Pennsylvania invader made sure his Viper Motorsports entry was still running at the finish after 10 drivers fell by the wayside.

"I was watching Brandon and I could tell he started really slowing down. And I mean, that dude's one of the smartest people in the country, so when I knew he was worried about tires, I figured I better be, too," Blair said. "So I just kinda started trying to do the same thing he was doing. He was definitely a good bit better than we were, (but) we held on for second and had some tire left there at the end. That'll make the trip home a little better."

Slay, whose six Late Model victories this season came in the Crate division, knew he was a "fish out of water" in battling one of the best Super Late Model drivers in the country in Overton. The hometowner wished he wouldn't have had trouble in traffic, but knew beating Overton was unlikely.

"He had the better car. He was going to ride behind me until I messed up — and I was going to mess up," Slay said. "If you told me going into this weekend we'd run third (and) set the track record, I would've been tickled to death. But there is a little disappointment, just because we did get to lead laps and hear all these people cheer. When they announced my name in the drivers' lineup, my motor was running and I could hear 'em yelling out there. Man, it's just awesome."

The feature was slowed by five cautions, the first two for the Brodnax-Shaker Motorsports teammates who finished in the top two spots of Friday's preliminary feature. G.R. Smith went over the turn-two banking on the first lap and Friday's $5,000 winner Winger showed a puff of smoke and then brief flames under the hood in rolling to a stop on the fourth lap.

The third yellow flow on the 18th lap for the slowing Henderson Motorsports ride of Michael Arnold, who headed for the pits while another yellow dropped on lap 39 when Joiner rolled to a stop.

On the ensuing restart, Blair and Crane tangled while battling out of turn two with Crane's car going for a spin. He pitted and returned for a top-five finish.

While Overton has earned more than $900,000 in earnings during his lucrative season, he came to Southern without a victory in November and a little wounded pride after things didn't go his way a weekend earlier in Las Vegas, Nev.

"We had bad luck Vegas and we felt like, you know, 'We suck. We're losers. We're not the best.' It'll humble you out real quick," he said. "We just keep on digging and quit thinking about it. Like I said, we've got a couple of more to get this year, and we're going to go back and get ready for next year."

Notes: Bo Slay lowered the track record with his 14.002-second fast time. ... More than half the field had retired by the 39th lap, with only six completing the race. ... Josh Putnam was running third on the 32nd lap when he pulled his smoking ride off the track due to a broken fan blade.