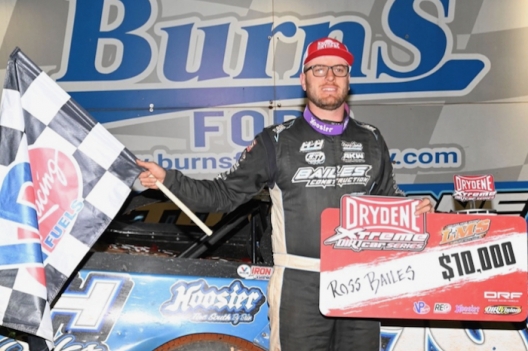 LANCASTER, S.C. — Ross Bailes of Clover, S.C., turned back a midrace challenge from Ben Watkins on Saturday at Lancaster Speedway and completed a flag-to-flag victory in the Palmetto State 50 to earn $10,000.

Bailes notched his second five-figure payday of the season in outrunning foes in a co-sanctioned event on the Carolina Clash Super Late Model Series (during its season-ending weekend) and the Drydene Xtreme Series (the opener of the third season for the winter tour) as he took the checkers 1.905 seconds ahead of Watkins.

Bailes had a few tense moments when a caution flag flew while he was cruising with five laps remaining, but he closed out his pursuers for his ninth overall victory of the season.

"I kind of hated to see (the caution) then, because I figured tires would be an issue. After that I was worried. I felt like something was going to break on the car or a tire was doing to go down," Bailes said. "We had a really fast car tonight and we had a good redraw, starting on the outside in that heat and that paid off. It couldn't have gone any better tonight."

Rock Hill, S.C.'s Watkins, who took the second spot from polesitter Brett Hamm of Newberry, S.C., on a lap-10 restart, settled for second with Hamm in third. Crate Late Model ace Carson Ferguson of Concord, N.C., making his Super Late Model debut in a Donald Bradsher-owned car, rallied from 15th to fourth while taking a spot from fifth-finishing Michael Brown of Pageland, S.C., in the final laps.

Third-starting Chris Ferguson of Mount Holly, N.C., retired on the 21st lap with a broken driveline while running fourth.

Bailes scored his fifth Carolina Clash victory of the second (22nd of his career) and third career on the Drydene Xtreme Series after looking for a faster groove in the second half of the race. Watkins nearly pulled alongside the leader in turn one on the 26th lap, but Bailes picked his way through traffic to build a more comfortable lead.

Watkins gave it his best shot but wasn't able to find a way past before Bailes got rolling again.

"I knew when we got to lapped traffic it was going to be key. Most of the time we do get to lapped traffic here. Clean air's so important, I knew (amid traffic) was my time to go after him. And he did really well passing lapped cars," Watkins said. "I could gain on him, but once I got in his dirty air, I just couldn't do much with him. Congratulations to Ross and them. He did a good job. Like I said, track position was key, but (I'm) still pretty happy with our run."

Hamm started on the pole but said that wasn't the best spot to start in the 50-lapper.

"I needed the outside pole. It's just hard. I was going to have to drive over (Bailes) to beat him through (turns) one and two (on the first lap), and I just don't want to race that way," Hamm said. "Especially (to avoid) tearing up a bunch of cars (being) at the front of the field. So we just took our medicine there. Same type of deal with Ben on that second restart.

"It just gets so tight, that corner, I don't know, it's just so many crumbs up there, you really couldn't (handle the car well). You just kind of had to point and hope. It just wasn't worth wrecking race cars over. So we'll take it tonight. We had a really good race car and something to build on."

The feature was slowed by three cautions, the first on the 10th lap when Jacob Houser slowed on the backstretch and again a lap later for a right-rear flat tire for Dustin Mitchell. The third and final caution appeared on the 45th lap for a slowing Benji Hicks, who was running ninth. 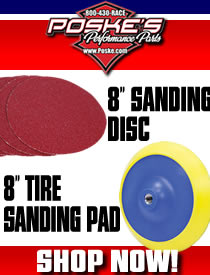