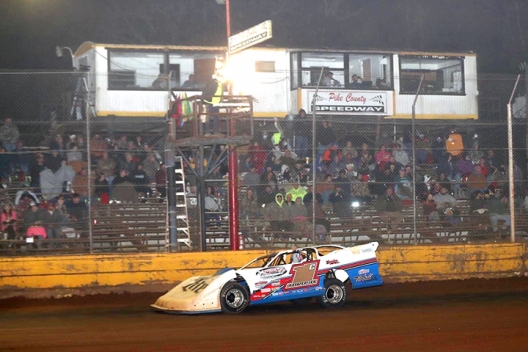 MAGNOLIA, Miss. (Oct 30) — Rocketing into the lead from his outside-front-row starting spot on the race’s initial start, Chad Thrash of Meridian, Miss., dominated Saturday’s 70-lap Jambalaya 100 finale at Pike County Speedway to earn a career-high $10,000 payday for his flag-to-flag victory in the unsanctioned special event.

With the race’s only two cautions coming on laps 18 and 60, Thrash cruised to nearly a half-track margin during the race’s middle portions before pulling away during the race’s final 10 laps to win by nearly a straightaway over sixth-starting Spencer Hughes of Meridian, Miss., and polesitter Tyler Erb of New Waverly, Texas.

“I just knew I had to beat Terbo (Erb) to the corner and if I could do that I’d be all right. After that I just held my line and ran my line,” said Thrash, the standout regional racer who recently wrapped up his fifth straight Mississippi State Championship Challenge Series title. “I’m glad to do it. This is the biggest win of my career. Thanks to Terbo and Spencer for racing me clean.”

After clearing Erb exiting turn two on the opening lap, the only serious challeng to Thrash’s Rocket Chassis came in the form of heavy traffic. He twice had to dodge wrecks with both of the race’s two incidents occurring just ahead of him, and he had to avoid a late run-in with a slower machine that nearly turned him into the back straightaway wall.

“Lapped traffic was hairy,” Thrash said in victory lane. “I’m sure they was probably better than me at the end of the race. I burnt the brakes off of it because I was too tight.”

Rallying from his sixth starting spot in his PCC Motorsports Longhorn Chassis, Hughes finished on the podium for the second straight year in the Jambalaya 100 finale in scoring the runner-up result.

“That heat race didn’t go as well as we needed it to at the end of the night as far as just track position,” said Hughes, who retired early from Friday’s 30-lap weekend opener. “All in all, to finish on the podium here second to Chad, that’s better than last night I guess. Congratulations to him. He was real good.”

Erb, who started the weekend by scoring a $3,000 victory in Friday’s 30-lap Jambalaya 100 opener, lost second to third-starting Timothy Culp on a lap-18 restart and ran there until getting into the back of Timothy Culp as the two drivers scrambled to miss the lap-60 pileup. That handed second back to Erb, but Hughes took it on the ensuing restart.

“I feel bad because when they all crashed in four I ramped over Timmy’s right-rear and I think it gave him a flat,” Erb said of the lap-60 incident. “I feel really bad about that. But it just wasn’t our night. We’ll try again next year.”