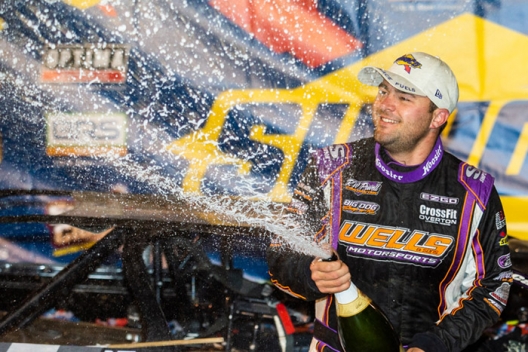 But while the $50,000 triumph won’t be the biggest of Overton’s crown jewel successes this season — not after his sweep of June’s double Dreams at Eldora Speedway in Rossburg, Ohio — it will certainly hold a prominent place in his ’21 log book.

“I know this place means a lot to ‘em,” Overton said of his boss and Wells’s son Eric, who decided together to hire Overton in late 2019. “I’ve been a nervous wreck all day because I really wanted this one really bad. I know it’s special to them. It makes me happy to make them happy.”

The 30-year-old star left no doubt about his dominance in the century grind. He started third, bolted into second at the initial green flag and dogged polesitter Tim McCreadie of Watertown, N.Y., until shooting underneath the event’s defending champion to assume command on lap 22.

From there no one could manage to mount a serious challenge to Overton, who easily handled three restarts between laps 43 and 80 to drive his Longhorn Chassis under the checkered flag a healthy 4.728 seconds ahead of McCreadie.

McCreadie grabbed the $20,000 runner-up spot in his Paylor Motorsports Longhorn car with a last-lap pass of Blairsville, Ga.’s Jonathan Davenport, whose advance from the ninth starting position reached second on lap 96 when he overtook a fading Josh Rice of Verona, Ky. Davenport settled for a third-place finish, 12th-starter Jimmy Owens of Newport, Tenn., finished fourth and Rice completed the top five.

Rice, 24, hustled forward from the seventh starting spot to grab second from McCreadie on lap 61, raising hopes that May’s Lucas Oil Late Model Dirt Series winner at Florence could record a monumental home-track victory. But he never drew close enough to threaten Overton before a defeating right-rear tire caused him to fall from second to fifth over the final five circuits.

Seeking a sweep of Florence’s Lucas Oil Late Model Dirt Series-sanctioned weekend after capturing the $10,000 top prize in Thursday’s 50-lap North-South Shootout, Overton came out firing on all cylinders in his sixth career North-South 100 feature start. He surged into the lead a bit earlier than he typically has in long-distance races this year and proceeded to control the action for the final 78 laps.

As Overton raced afterward, his No. 76 was once again in a league of its own.

“I’ll tell you what, that thing was awesome,” said Overton, who made his first North-South 100 feature appearance in 2014 (finished 20th) and had a previous best placing of second in last year’s event. “About anybody could’ve drove it tonight. We’ve been working really hard on it and it definitely paid off.”

The only moment that gave the cool, calm and collected Overton any real trepidation was when the hard-charging Rice appeared in second on lap 61.

“I was looking up there at that (score) board and I seen that number 11 car and I knew it was Rice and I said, ‘Oh, s---, this is gonna be bad,’ ” Overton earnestly said. “Honestly, when I seen him, I thought, he’s gonna rip around this top and there ain’t no chance in hell I’m going up there, so that’s where he was gonna have to pass me at.”

Rice briefly got his deficit to Overton under 1 second on the 80th circuit when the pacesetter dealt with heavy lapped traffic. But after a caution flag flew that very lap for debris on the backstretch, Overton easily pulled away on the restart and just kept distancing himself from the field.

When Overton climbed out of his car to celebrate his first-ever North-South 100 victory with David Wells and the rest of his team, he wore a very satisfied smile.

“Hell, I don’t even know what to say,” said Overton, whose latest triumph pushed his earnings for his 21 overall triumphs this season to an astounding $502,575. “It’s a dream come true to drive this thing. I don’t wanna stop.

“I owe it all to (David and Eric Wells). They put it in my hands and told me, ‘Here you go, take care of it, and let’s see what you got.’ I can’t thank them enough.”

Overton also had words of thanks for the overflow crowd that attended the event.

“Man, this is cool, all these people here, ‘ya all pumping us up right before the race,” Overton said. “This is awesome. I love coming here just because of you all, so I appreciate every one of you.”

“I did the best I could to run every lap,” McCreadie said. “I tried to take it easy, but it’s hard. Brandon wasn’t waiting around tonight. He figured he needed to get control of the race, and obviously Rice, man, that kid’s such a battler.

“Usually when somebody comes up there (racing the top) you go up there, so I tried (after Rice took second from him running the cushion). I maintained but I just wasn’t good enough. I faded, and really, I just got lucky at the end. I don’t know if they were worse in traffic, but to race with Rice and J.D. like that at the end was pretty crazy. It would’ve been pretty wild if that was for the win.

“It’s a satisfying run,” he added. “I’m not happy, but at the end of the day I think we finished better than we probably were.”

“Second’s are cool, they’re fun, they’re satisfying when you go to the checkbook,” McCreadie said. “But we want to be where (Overton’s) at down there, and we want these people screaming and yelling for us.

“To be sandwiched between the two winningest guys (Overton and Davenport) this year, and the two hottest cars this year, is pretty cool for us. We need to get better though. These two are like Pac-Man — they’re just gobbling all the wins up, so we just better get a little better.”

Davenport, 37, attempted to again use the approach that yielded him a $50,000 victory in the previous week’s World of Outlaws Morton Buildings Late Model Series-sanctioned USA Nationals at Cedar Lake Speedway in New Richmond, Wis., but second was as high as he could climb before McCreadie nosed him out for the spot on the final lap.

“I tried to stay patient at the first, keep my tires under me, because I knew it was gonna get slick top to bottom,” Davenport said. “I just wanted to have the best tires possible for the last 20 laps. We got to second, but McCreadie found a different line there and got back to us and a lapped car held me up coming off turn four and I couldn’t quite get the run I had been getting back to the line and he barely beat us.

“We just tightened up a little too much,” he continued. “We felt a little too good there hot-lapping, and I guess we were wasn’t smart enough to know the front tire had as much grip as the rear ones so we turned pretty good there. I couldn’t run the bottom like we needed to. We just missed a little bit. It don’t take but one adjustment anymore, these guys are so good.”

The race’s three caution flags flew on laps 43 (ambulance needed outside the track), 53 (Johnny Scott slowed with a flat tire) and 80 (debris on the backstretch).

Notes: Overton became the 26th winner in the 38-year history of the North-South 100. He’s the third driver from Georgia to capture the race, joining Davenport (2015) and the late Mike Head (1990). … Overton was stopped by officials during the lap-43 caution because a “mist” was seen coming from the back of his car early in the race and they wanted to make sure his fuel cap was on tight. It was and Overton continued on; his crew said the spray was from fuel overflow at the start. … Zack Dohm of Cross Lanes, W.Va., climbed into the top five from the 10th starting spot before retiring on lap 85 while running eighth. His crew thought his car might have run out of fuel. … After being inducted into the National Dirt Late Model Hall of Fame, Terry Phillips of Springfield, Mo., finished 25th in his first North-South 100 feature start since he placed 11th in 2008. … The race’s first retiree was Devin Gilpin of Columbus, Ind., who dropped out with driveline woes. … There was a lengthy break from action stretching over an hour-and-a-half before the feature was green-flagged because officials had to wait for the scheduled 9:30 p.m. ET start of the live broadcast on MavTV. The feature ultimately began at 9:53 p.m.

Indiana-based teams swept the consolation races with Devin Gilpin of Columbus winning from outside the front row and Morgantown's SSI Motorsports driver Ricky Thornton Jr. winning from the pole, both in flag-to-flag fashion in 15-lappers. ... Spencer Hughes, 20, of Meridian, Miss., came from fifth briefly to second in the first consy, but he lost the final transfer spot to Nick Hoffman in the final laps while fading. ... Two top contenders were knocked from contention on the first lap when Dale McDowell and Stormy Scott got together on the backstretch, sending Scott's car into the infield berm for a 480-degree spin that left his car facing the wrong way at the turn-three entrance. No other cars struck Scott's machine but McDowell's left-rear tire was flattened and nosepiece damage forced Scott out. McDowell finished fifth. ... Scott was among four drivers getting provisional starting spots along with Shane Clanton, Matt Cosner and Trevor Landrum. ... Cosner ran second early in the consy and faded to finished seventh. ... Clanton finished ninth in his consy and Landrum used the consolation race as test session.

The rest of Saturday's top 10 starters are Thursday's tuneup winner Brandon Overton of Evans, Ga., and Hudson O'Neal of Martinsville, Ind., on the second row followed by third-row starters Darrell Lanigan of Union, Ky., and Kyle Bronson of Brandon, Fla.

The fourth and fifth rows will be made up of Ralph Latham Memorial winner Josh Rice of Verona, Kyi., Mike Marlar of Winfield, Tenn., Jonathan Davenport of Blairsville, Ga., and Zack Dohm of Cross Lanes, W.Va.

Rain between the two rounds of heat races pushed racing into the wee hours with the final heat race wrapping up at 1:30 a.m.

Rain that hit the speedway after the first round of heats put the program under a rain delay about 8:30 p.m. Late Models returned to competition more than four hours later after a lenghty track-packing session and modified competition.