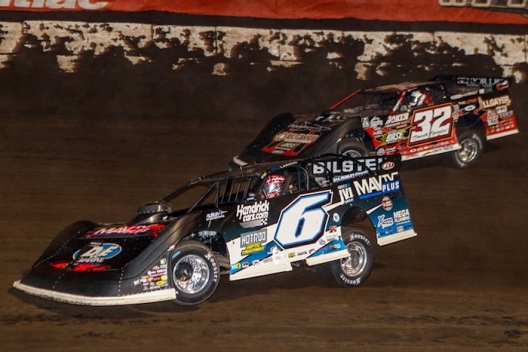 Larson wrested the lead from Pierce amid a slide-job battle on lap 31, then turned back Pierce's last-gasp charge for a 100-lap victory, his first on the World of Outlaws Morton Buildings Late Model Series.

The 29-year-old wunderkind from Elk Grove, Calif., who wins in virtually anything he races, scored his richest Dirt Late Model victory in the K&L Rumley Enterprises No. 6 and soaked up the enjoyment of a moonlighting weekend from his NASCAR duties.

"I can't say enough about Kevin Rumley, everybody who helps out on this car. All you fans, this was such an awesome event," Larson told the standing-room only crowd from victory lane. "The atmosphere, it was unbelievable. So thank you guys so much for making me feel welcome here in Late Model country and I look forward to even more."

Pierce, who led the first 30 laps from the pole position but showed left-front and right-rear battle damage after losing the lead to Larson, fought back to draw within two-tenths of second with eight laps remaining but settled for a $15,000 runner-up finish from the race's richest-ever purse.

The Oakwood, Ill., driver was 1.251 seconds behind at the checkers with Shannon Babb of Moweaqua, Ill., who yo-yo'd from sixth to second to eighth and back up to third, got the final podium spot. WoO title contenders Chris Madden of Gray Court, S.C., and Brandon Sheppard of New Berlin, Ill., rounded out the top five at the quarter-mile oval flooded by an event-record 31 starters.

Pierce was in control at the outset with fellow front-row starter Hudson O'Neal fading early while the sixth-starting Babb was up to second after just nine laps. The seventh-starting Larson slipped back a spot early but found a rhythm to break into the top five by the ninth laps and move up to challenge Pierce after a lap-27 restart.

Larson dove under Pierce in turn two on the 29th lap, the first of three unofficial passes for the lead between the two before they'd bet back to the start-finish line.

They made contact the next lap when Pierce dove underneath in turn one, and Pierce suffered spoiler damage when he got into the wall and then left-front damage when Larson shut the door to Pierce on the backstretch in taking the lead on the 31st lap.

After a caution to remove debris, a piece of Pierce's spoiler, Larson set sail through the race's middle stages with Stormy Scott taking the second spot from Pierce on laps 40-54. Pierce fought his way back to second but found himself 3.756 seconds behind the leader with 65 laps remaining.

A caution with 21 laps remaining erased Larson's margin, and Pierce's steady high-groove charge kept Larson within striking distance heading into the race's late stages. But Larson moved up to a higher groove on lap 87 and a few Pierce bobbles let the winner pull away in the final laps.

"Any time you can get to drive a car prepared by Kevin Rumley, you probably have got a good shot at winning," Larson said. "I didn't feel too comfortable at all the last two days, and I was hoping something would click. Early on, the middle was good and I could stay bent and just stuck with it.

"(Late in the race) I saw the big screen and Bobby was getting close to me and I knew I had to get up on the wheel. I didn't want to run the cushion all the way around the corner, because I kept hitting the wall the last two days. I just decided to (stick with it) and, gosh, my car was really good. That was a lot of fun there. Long race. It took a lot of patience. But we got it done."

Pierce couldn't quite track Larson down late in the race.

"I think if he would've stayed on the bottom there for one more lap, it would've gotten really interesting," Pierce said. "Congrats to him on the win. You know, we kind of got into it a little bit there, he got a little wide. But I've seen that happen so many times this weekend on the backstretch. It just closes in on your fast.

"All in all, this is a win for us. I've kind of been struggling here; I'll take second any day. I made more money than all of these fans booing. Thanks for coming and supporting us."

While Larson felt welcomed by one of the sport's most famous crowds, Pierce wouldn't have minded if Larson would've spent a weekend off from NASCAR at the beach.

"Man, I sure which Kyle would've liked NASCAR more than dirt, though," he said.

The third-finishing Babb was honored to battle "some hellacious competition out here," the three-time race winner said. "What a division of racing when Kyle Larson wants to come spend a weekend with us, here at Fairbury. That says a lot (that we've) come a long ways. That's due to all the fans coming every night supporting this thing."

Larson is enjoying his chance at big-money races in a variety of race cars.

"It's definitely been a good year. Last year, I won a lot of races, but I didn't get a chance to run in the legit big ones. So it was awesome to get to run the King's Royal (sprint car event at Ohio's Eldora Speedway) and get a win there. I didn't get a win at (Eldora's Late Model) Dream, but had a lot of fun.

"And then to come to the PDC, a race that I probably never would've thought that I'd get to the opportunity to race it, it feels awesome. To win a crown jewel in Late Models after just winning a crown jewel in sprint cars, my first crown jewel in sprint cars a couple of weeks ago. It's awesome. I just can't say enough about everybody, like I said, it's so much fun to get to drive all these good race cars, whether it be a Late Model, a sprint car (and a NASCAR) Cup car with our Hendrick Motorsports team. It's just been an awesome year and I hope we can win some more."

The 100-lapper was slowed by five cautions — four of them in the first 32 laps, but none for serious incidents.

A lap-32 caution appeared for debris — a portion of Bobby Pierce's spoiler amid contact in his battle for the lead with Kyle Larson.

The final yellow appeared on lap 79 for a slowing Tyler Bruening, who was running 16th.

Notes: Larson's previous richest Dirt Late Model victory was $15,000 for two Lucas Oil Late Model Dirt Series, the first in 2020 at Port Royal (Pa.) Speedway and the second in January at All-Tech Raceway in Ellisville, Fla. ... Fast qualifier Ryan Gustin of Marshalltown, Iowa, ran among the top three the first 28 laps but slipped to 10th by lap 41 and ended up 15th. ... Heat winner and outside front-row starter Hudson O'Neal of Martinsville, Ind. slipped back early, pitted on lap 27 and retired just before halfway. ... Reigning track champion and hometown driver McKay Wenger, who started 16th, ran as high as fifth and posted a solid seventh-place finish. ... Just more than half the 31-car field, 16 entrants, completed 100 laps.