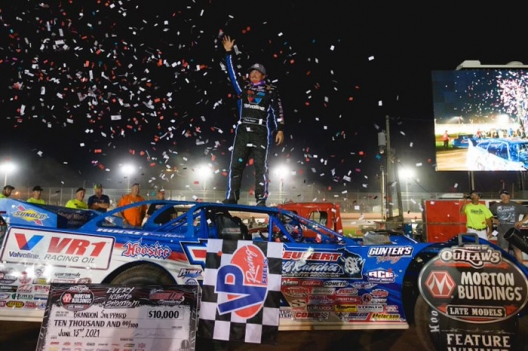 Capitalizing on high-side momentum out of turn four heading for the checkers, the series points leader from New Berlin, Ill., edged the sixth-starting Madden by 18-hundredths of a second at the 3/8-mile Head of the Lakes Fairgrounds oval to earn $10,000 and extended his points lead on the Gray Court, S.C., driver.

Dennis Erb Jr. of Carpentersville, Ill., who led the first 24 laps before Sheppard's outside line carried him into the lead, settled for third while Tyler Bruening of Decorah, Iowa, and top-finishing non-series regular James Giossi of Hudson, Wis., rounded out the top five.

Sheppard, the 28-year-old driver of the powerhouse Rocket Chassis house car, knew he had his hands full with Madden after a lap-39 caution flew to set up a two-lap shootout to the checkers.

"I didn't have much edge over him those last few laps, for sure," Sheppard said. "It took me a few laps to get going there. I don't know if it was my tire heating up or what. I think I know where we could've been a little bit better on our car for sure, but all in all it was another great racetrack here at Gondik Law Speedway."

Madden first put pressure on Sheppard on lap 30 after grabbing second on a restart, foreshadowing another solid restart at the finish that nearly carried the low-running Madden to his fifth series victory of the season.

"I thought I had him right there at the end," Madden said. "He just (used) his little ramp he had up there off of (turn) four. He hit it perfect that lap. You know, if he don't hit it perfect, we win. But he hit it perfect and got him a big run back down the front straightaway."

Madden's ready to take another shot at Sheppard heading toward three weekend events in North Dakota, Minnesota and Wisconsin.

"We've got a lot of racing to do. I just raced him the way I want to be raced, very clean. Great race for the fans. Awesome racetrack. We couldn't ask for anything any better, it was awesome. Great night for my team," Madden said. "We drew a six (starting spot) and that put us behind. Great night for Team Drydene to battle back to second and racing for the win there."

The third-finishing Erb led comfortably in the first half of the race in search of his first career back-to-back national touring victories. But Saturday's WoO winner at Jackson (Minn.) Motorplex wasn't as strong in the second half of the race.

"I just needed to be a little bit tighter there at the end," Erb said. "I wasn't able to charge the corner as hard as I needed to. But we had a good run, led early and ended up third. Being up (on the podium) is a good start for us here, so we'll just continue on with this and go on to the next one."

Erb, who has been in the top five in four of the last five WoO events with crew chief Heather Lyne, said the Superior run can "carry (over to future races), I think. Things are working real good right now, the car's working good, Heather's doing a great job of working hard, and I'm doing my part. So hopefully we'll continue this run and keep it up in the front."

While Sheppard captured his 72nd career victory, his three-victory season is below the standards he's set with an average of 15 victories over the past three seasons. He said the Rocket team is "inching closer" to where they'd like to be.

"We're right on the verge of being really good, I feel like. We've just gotta keep working on this think and keep gaining on it like we've been doing," Sheppard said. "Rocket (cars made up the top) three, so I think we're doing a pretty good job right now. Our consistency's been there, we just haven't had the wins. But we've got a lot of tough competition out here, so we're working our tails off to get better night in and night out and hopefully at some point it starts to pay off — it's starting to now, so hopefully we can keep rolling."

The first of three cautions appeared on the 18th lap when the lapped car of Tim McMann slowed in turn two and pulled off the track. On the 30th lap, Aaron Lillo and Frank Heckenast Jr. tangled at the inside of the backstretch just off turn two. The final caution appeared for a slowing Harry Hanson on the 39th lap.

Notes: Sheppard captured his 10th career WoO victory in Wisconsin. ... Former track champion Brent Larson broke Rick Eckert's track record of 16.543 seconds in time trials with a 15.847-second lap. ... Series regular Cade Dillard of Robeline, La., is out with an unspecified ilness that required a recent night's stay in a hospital. "We will rest and regroup and try to be back for the end of the week," Dillard wrote on his team's Facebook page. ... Jimmy Mars, Dillard's chassis builder with MB Customs Race Cars, entered as No. 97 to earn owner points for Dillard's team. He finished second. ... Twenty of 24 starters were running at the finish, all on the lead lap.