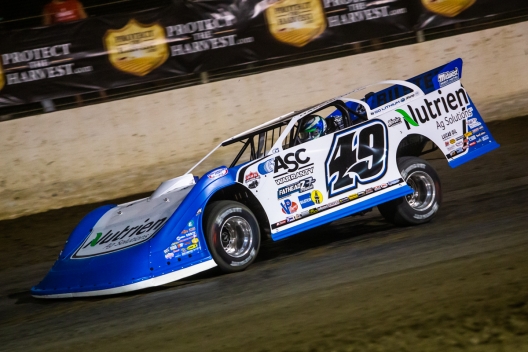 COLUMBUS, Miss. (June 18) — After completing a sweep of the shortened Optima Batteries Clash at the Mag weekend in a brand new Longhorn Chassis, Jonathan Davenport had plenty to be happy about Friday as he celebrated in victory lane at Magnolia Motor Speedway.

But even after logging his series-leading fourth Lucas Oil Late Model Dirt Series win of the season, Davenport couldn’t help but wonder what might have happened if he had debuted his new race car one week earlier during Eldora Speedway’s double Dirt Late Model Dreams.

“I guess this is a month of sweeps,” said Davenport, whose impressive performance at Magnolia came a week after Brandon Overton of Evans, Ga., earned $273,000 for sweeping Eldora’s four-night event in his own brand new Longhorn. “Brandon Overton done a helluva job last week at Eldora. Broke out a new Longhorn car and swept the whole weekend. Maybe we should’ve broke this one out one weekend earlier. I don’t know, but I may be kind of picky about where I run this one because it’s a good piece.”

Davenport’s new Double L Motorsports Longhorn was indeed good, if not perfect, for the 37-year-old racer from Blairsville, Ga., at Magnolia’s weather-shortened Lucas Oil Series weekend. After claiming a $5,000 payday in Thursday’s Clash at the Mag preliminary night feature during his first night in the new car, Davenport was again dominate on Friday, when Lucas Oil Series officials replaced the second preliminary night program with the Clash at the Mag finale in order to beat approaching storms forecast to hit the area on Saturday.

After setting fast time in qualifying and winning his heat race, Davenport was never seriously challenged in Friday’s 50-lap feature. He pulled away from fellow front-row starter Jimmy Owens through the race’s first half and survived a rash of late restarts to take the checkers 1.813 seconds ahead of runner-up Michael Arnold of Hattiesburg, Miss. Owens of Newport, Tenn., was third at the finish with Kyle Bronson of Brandon, Fla., and Mike Marlar of Winfield, Tenn., rounding out the top five.

Davenport’s only real obstacle during the feature was slower traffic as the race ran caution free from lap seven until lap 31. With the track locked down in the low groove, slower cars in Davenport’s path allowed Owens to close the gap around the race’s halfway point. Owens briefly took a look to the outside of Davenport, but the bottom groove was simply too strong to allow a high-side pass.

Even knowing he occupied the track’s dominant lane, Davenport still worried a high-side pass may have been coming until the lap-31 caution gave him clear track ahead.

“Once we’d get in lapped traffic, I was OK with the yellows because these guys are so good behind me that somebody’s gonna step out of line and maybe burn in a groove in or something,” Davenport said.

With four cautions slowing the pace over the final 19 laps, Davenport never had to worry about traffic again. His only concern from that point was getting through the restarts without problem, which he did save for when he spun his tires on a lap-35 restart leading to slight contact from Owens, who was running second at the time.

“I spun my tires there on the next to last restart and screwed Jimmy up there I’m sure,” Davenport said. “I spun my tires and had to come down. I felt him hit me in the left rear so that probably cost him a second-place there.”

Davenport’s slip up did indeed cost Owens the second spot as it allowed the third-running Arnold to get a run from his outside position on the double-file restart and clear Owens through the first corner. Arnold, a standout weekly and regional racer at southern and central Mississippi dirt tracks, made the most of the opportunity, pulling away from Owens through the closing laps to log an impressive runner-up finish.

“I really didn’t expect this. I was hoping for a top five on the way here. Sitting here second, man, this feels great,” said Arnold, who was racing for just the third time in 2021. “At first, I kinda wanted to try the top … Once I got by Bronson and I was third I was like, ‘man, we’re good I need to chill out and just ride.’ I tried to do that.”

Owens, the defending Lucas Oil Series champion and last year’s Clash at the Mag winner, logged his first podium finish in a series event this season. It came in a backup car after his primary machine was badly damaged in a heat race wreck on Thursday that kept him from starting the night’s prelim feature.

“The crew busted their tails to get the backup car out and get it fixed,” Owens said. “I felt like I was pretty good especially after we went green for a while. I could run Jonathan down a little bit, but it was just too one-laned. I thought I was gonna jump to the high side and maybe go around him in lapped traffic. I could get a good run, but then my car would push across the middle there. We just didn’t have enough.”

The race was slowed by five cautions. The first appeared with seven laps compete when Dalton Cook of Columbus, Ga., made heavy contact with the turn-three wall. From there, the race ran green until lap 31 when Spencer Hughes of Meridian, Miss., slowed with damage to the front of his machine.

The pace was slowed again just two laps later when a scramble back in the pack left Tyler Erb of New Waverly, Texas, and B.J. Robinson of Bossier City, La., spun on the front straightaway. Ricky Thornton Jr. of Chandler, Ariz., slowed at the exit of turn four to cause a lap-35 yellow flag, and the final caution waved one lap later when Hunter Rasdon of Jonesboro, Ark., spun.

Notes: Davenport’s victory marked just the second time this season a Lucas Oil Series event was won from the pole. Davenport was also the other pole-starting winner at Port Royal (Pa.) Speedway on April 18. … Davenport’s 17th overall victory on the season was his second victory in a Clash at the Mag finale; he also won the event in 2015. … Entering the event third in Lucas Oil Series points, Davenport made up significant ground on points leader Tim McCreaide of Watertown, N.Y., who finished eighth and second-place Hudson O’Neal of Martinsville, Ind., who finished ninth.