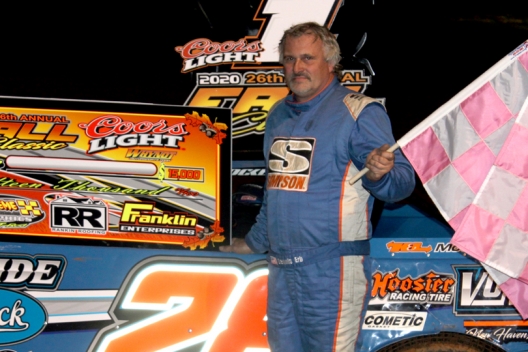 MERIDIAN, Miss. — Dennis Erb Jr. couldn’t remember how many times he’d tried to win the Coors Light Fall Classic at Whynot Motorsports Park. He only knew that he’d been close more than once. Just how close had the Carpentersville, Ill., driver come in 10 previous starts?

On Saturday Erb put all the near misses behind him as he led 70 laps — including the final 34 — to win the 26th annual Coors Light Fall Classic, becoming the event’s 12th different winner in the last 12 races. He led on three occasions, taking the lead for good when Tyler Erb (no relation) of New Waverly, Texas, slowed with a broken lift bar just before completing lap 67.

Twice Erb Jr. led in the first 50 laps only to let his lead get away. But both times he was in the right spot to capitalize when he needed to. He led the first 21 circuits before giving way to Dillard in traffic. After reclaiming the lead from Dillard on a lap-35 restart, Erb Jr. led the next 15 laps before giving way to Tyler Erb as they completed lap 51. But as Erb Jr. stalked Tyler Erb in traffic on lap 66, Tyler Erb slowed suddenly in turn four and pulled up the track, handing the lead back to Erb Jr.

“It’s hard when you’re up front and then you get passed there,” Erb Jr. said. “The race is still long. We were early into the race, so I wasn’t really too worried about it. I knew as long as I could run with everybody, I would be alright. The car was good and when I needed to go, I could push on a little longer.”

Erb Jr. took his initial lead from his outside front row starting spot, pulling ahead of polesitter Michael Arnold of Hattiesburg, Miss., on the opening lap. Dillard quickly got by Arnold as well, never letting Erb Jr. get too far ahead early. He was there to grab the lead as the World of Outlaws Morton Buildings Late Model Series regulars sliced through traffic.

“We were really good through the beginning there and the middle,” Dillard said. “We just got really free about halfway on and just didn’t have nothing for (Erb Jr.) after that. We’re just gonna have to do some homework and see if we can figure out why. This has happened on several different occasions and it doesn’t seem to be tire related. We’re just gonna have to do some work and see if we can’t get better on these long races.”

With the departure of Tyler Erb on lap 66, Dillard was third behind Hughes and Erb Jr. He managed to slip by Hughes, but could no longer keep pace with Erb Jr., who pulled away to lead by as much as a straightaway late in the distance.

“I didn’t have a really good car (late in the race), so I didn’t think I would even be able to run second,” said Dillard. “I just found the rubber before Spencer did. That’s kinda the only way I was able to get by him. (Hughes) had a good car. If he would’ve found the rubber before me, that’s where he would’ve finished. It’s frustrating to have such a good car early on and not finish at all, but we’re definitely happy with second. Dennis was really fast tonight, so congrats to him. We’ll just build from it and go on.”

Erb Jr. led by as much as three seconds over the final 34 laps. His only scare came while negotiating lapped traffic with about 15 laps to go as a gaggle of cars got together in turn two, forcing the leader to take evasive action.

“I was just trying to keep an eye out in front of us there,” said Erb Jr. “I knew there was a pack right there so when I seen that I made a quick right hand turn to get up the hill a little bit and get out of the way. You just gotta watch for all that stuff. You never know what’s going to happen.”

After that, Erb Jr. settled in behind 11th-running Rick Rickman of Columbus, Miss., and stayed in line to close out the race.

“I knew I had a decent lead. (Crew chief) Heather (Lyne) was up there (signaling) and I knew that we were gonna be alright just like that, so there was no reason to push the issue,” the winner said. “I was trying to just drive it out and not hurt a tire or anything like that. I knew the racetrack was taking a little rubber there on the bottom and the car was getting tight, so we were just trying to maintain there.”

Notes: The race was slowed by six cautions, with the lap-66 yellow for Tyler Erb the last one. Aside from the final 34 laps, a pair of 15-lap green flag runs were the longest of the night. … Dennis Erb Jr. made a point to thank engine builder Vic Hill for providing plenty of power to his Rocket XR1 chassis. … Eleven of the 24 starters completed 100 laps. … Mike Marlar was making a bid to join the top 10 when he got over the cushion in turn one on a lap-25 restart, collecting David Breazeale and Billy Moyer. Marlar changed a tire and returned, but didn’t complete another lap. Breazeale parked his machine, while Moyer continued on, but eventually retired on lap 66. … Jonathan Davenport struggled most of the weekend. After starting 24, he was up to 11th on lap 33, but a tangle with Michael Arnold two laps later sent J.D. to the tail of the field. He parked his ride on lap 65 and was credited with 18th place. … Chase Junghans’ ninth-place finish was his best in four Fall Classic starts. His previous best was 10th in 2017. … Parker Martin won the non-qualifiers race. ... Jeremy Shaw picked up $2,500 for winning the Crate Late Model feature.

The 26th annual Coors Light Fall Classic drew 43 drivers from 12 states, topped by 17 from the Magnolia State. Alabama and Louisiana are represented by six drivers each, while Georgia has three. There are two drivers each from Arkansas, Illinois and Tennessee, while Florida, Kansas, Kentucky, Texas and West Virginia each have a lone representative. … With this weekend’s cancellation of the World of Outlaws Morton Buildings Late Model Series events at Kokomo (Ind.) Speedway and Federated Auto Parts Raceway at I-55 in Pevely, Mo., the event has drawn a few more national touring drivers. WoO regulars Cade Dillard, Dennis Erb Jr., Chase Junghans and Ashton Winger are on hand, along with Lucas Oil Late Model Series regulars Jonathan Davenport, Tanner English, Tyler Erb and Josh Richards. The Lucas Oil Series wrapped up its season last weekend at Portsmouth (Ohio) Raceway Park. … Five drivers are making their first career Fall Nationals start: Joseph Joiner, Richards, Dean Carpenter, English and Sam Seawright. … Of all the feature starters, Carpenter of Coldwater, Miss., had the longest way to go after qualifying 16th in his group on Friday. He finished sixth in his heat and second in his consolation race. … There are four former Fall Classic winners in attendance: Winger (2019), David Breazeale (’16, ’05), Mike Marlar (’15) and Davenport (’11). … Winger’s weekend ended early with a blown engine during Friday prelims. … Davenport rolled around the topside in the second consolation race, finishing fourth to take the final transfer spot. … In the first consy, outside front row starter Seawright of Rainesville, Ala., was charged with jumping the start and docked one row. Seawright still managed to finish third to gain entry into the feature. … Of all the races Hall of Famer Billy Moyer has won in Mississippi, he’s never won the Fall Classic. In 13 starts, he has three runner-up finishes (’15, ’10, ’08). Moyer finished third in his first Fall Nationals start in 1997. … It’s been 22 years, 11 months and 29 days since Moyer’s first Fall Nationals start, the longest stretch among the 24 feature starters. Breazeale of Four Corners, Miss., who finished seventh in the 1999 Fall Classic, is next at 20 years, 11 months and 24 days since his first start. ... In four starts, Klint Byars of Carrolton, Miss., has never finished worse than 12th. He's starting seventh as he seeks to improve on his best finish of fifth place.

Taking advantage of his outside front row starting position when polesitter Dane Dacus was docked a row for jumping the start of the first heat, Michael Arnold of Hattiesburg, Miss., led flag-to-flag to win Friday’s opener, earning the pole for Saturday’s 26th annual Coors Light Fall Classic at Whynot Motorsports Park. Dacus of Lakeland, Tenn., Friday’s fastest qualifier among 43 entries, fell back to fourth before rallying back to finish second in the heat. He’ll start fifth on Saturday.

Friday’s other heat winners where Dennis Erb Jr. of Carpentersville, Ill., who won the second prelim and will start on the outside front row of Saturday’s feature; Joseph Joiner of Milton, Fla., who dominated the third heat; and Cade Dillard of Robeline, La., who passed polesitter Billy Moyer  and then turned back a challenge from Rick Rickman to win an entertaining fourth heat.

Sixteen cars are locked into Saturday’s 100-lap feature, with a pair of consolation races on tap to set the remainder of the 24-car field. Saturday’s drivers’ meeting is scheduled for 4:30 p.m., but action isn’t expected to start until the sun sets.

For the second time in three years, Dane Dacus of Lakeland, Tenn., was the overall fast qualifier. Going out 18th in the first group, Dacus turned a quick lap of 13.227 seconds to earn the pole position for the first heat. His time was a bit slower than his record-setting mark of 11.928 seconds he turned in 2018. “I think we just got lucky,” quipped Dacus as he collected a $400 check for setting the high mark.

Dennis Erb Jr. of Carpentersville, Ill., was the quickest in the second group, with a mark of 13.300 seconds, earning the pole for the second heat. Erb was the event’s fast qualifier in 2017. The other two heat race polesitters are Florida’s Joseph Joiner (13.244 seconds in group one) and Hall of Famer Billy Moyer (13.384 in the second group).