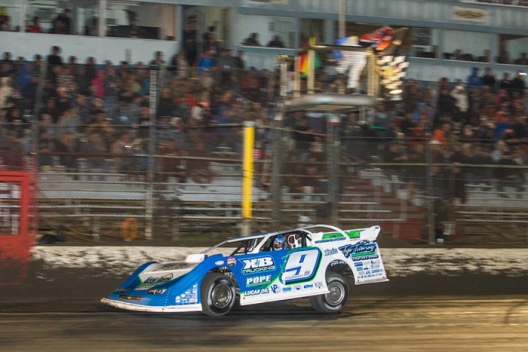 Moran dove under Tyler Erb at the flagstand on the 22nd lap and led the rest of the way for a $5,000 victory and his second career Lucas Oil Late Model Dirt Series victory.

“We finally got this first one at East Bay, and first Lucas Oil win I’ve had in five or six years, I don’t know,” Moran said in victory lane after a joyous flag-waving celebration on his car’s roof. “ This is awesome man. I’m so, so glad we got this one (behind) us.”

Moran, who started outside the front row, took the checkers 1.277 seconds ahead of home-track star Kyle Bronson of Brandon, Fla., whose back-and-forth battle for the lead with Brandon Sheppard preceded Erb’s ascent to the top spot on lap 21, the only lap the New Waverly, Texas, driver led.

The 13th-starting Erb finished third with Jonathan Davenport of Blairsville, Ga., fourth and Chris Garnes of Evans, W.Va., fifth — after starting eighth and falling as far back as 22nd — in his East Bay debut.

Moran, who narrowly lost a near-photo finish in 2018’s opener at East Bay, thanked everyone who helped him win in his return the Tye Twarog Racing team for 2020.

“Kyle was the one that showed me (the high groove),” he said. “This place gets so sketchy when you run around the top like that … I knew (turn four) was faster up rough and I didn’t want to mess myself up.”

Bronson struggled with his car late in the race in his attempt to regain the lead.

“Our car was really, really good tonight here,” the Floridian said. “Me and Sheppard got together there late in the race, and it bent the tie rod or something, because I couldn’t turn after that. It took me until the last couple of laps to figure out how to drive it again.

“I’m tired of seconds and fifths and 10ths, you know? We’re going to give it all we’ve got all week long and we’re going to win us a couple of these damn races.”

Erb led only the 21st lap but had a shot at a victory at the track where he won twice in 2019.

"I kind of dug myself a hole in that heat (race). I needed to run better than third. But it was really, really racy. Kyle, Sheppy, Devin, (Davenport), it was crazy on the restarts. … It was a good run for us,” Erb said. “I love this racetrack man, it’s awesome. Like tonight, when you can’t turn (because of slick conditions), it makes the racing really interesting. You don’t always have to have the best car. You’ve just gotta make good decisions and not lose spots here and there. I’d definitely like to win some more races like last year.”

Polesitter Tim McCreadie of Watertown, N.Y., gunning for his second straight Lucas Oil victory to open the 2020 season, led the first 10 laps before Sheppard swept around him with turn-four momentum to give the New Berlin, Ill., driver the lead.

Sheppard stayed in control through the midpoint of the 30-lapper, but the 10th starting Bronson got rolling on the high side to chew into Sheppard’s lead, but his rally was halted by a lap-19 caution just as he caught the frontrunner.

On the restart, Bronson pulled a slide job on Sheppard in turns one and two. Sheppard answered to regain the lead on the backstretch, but Bronson’s second slider on the same lap put him out front on lap 19.

After another caution on lap 20, Bronson led the field to green with Sheppard pulling up to challenge. Sheppard edged ahead on the backstretch, but when Bronson tried to make an outside pass while angling into turn three, he made contact with Sheppard, sending the Rocket Chassis house car into a spin. No car in the onrushing field struck Sheppard, but he had to restart on the tail as Bronson restart with his car damaged on the lower driver’s-side door.

Moran and Erb came alive on the restart, setting up a three-wide backstretch battle for the lead with Erb edging ahead to lead lap 21 when Bronson pushed high in turn four, falling to third behind Erb and Moran.

The Erb-Moran battle continued on lap 22 and when Erb dove low and slid high exiting turn four, Moran dove to the inside lane on the frontstretch to edge ahead for a lead he’d never give up.

The 30-lapper was slowed by six cautions, most significantly for Sheppard’s turn-three spin on the lap-20 restart. That restart followed a yellow when Brian Shirley ended up against the turn-three wall. Other cautions were for single-car slowdowns for Chase Junghans (first lap), Mason Zeigler (lap 13), Coleby Frye (lap 19) and Johnny Scott (lap 27)

Notes: The Morans join three other sets of father-son winners at East Bay’s Winternationals: Jack Boggs-Jackie Boggs, Bob Pierce-Bobby Pierce and Don O’Neal-Hudson O’Neal. … Moran's previous Lucas Oil victory came July 3, 2013, at Muskingum County Speedway in Zanesville, Ohio, the track owned by his family. ... Jonathan Davenport was supposed to drop to the tail for the feature after switching to a backup car after the consolation race, but officials realized after the race he apparently retained his original starting spot; it was unclear if any ruling would be made. … A red flag appeared in the second consy for a frontstretch scramble that sent Justin Rattliff and David Breazeale spinning; both saw their nights end. … Less than a half-hour after the feature, there was a medical emergency deep in the pits with officials and later emergency responders attending to an individual in distress.

Tim McCreadie starts the 30-lap feature from the pole position as he guns for a second straight victory to kick off the 2020 Lucas Oil Series campaign. The last of his three career East Bay victories came in 2017. … G.R. Smith won the final heat after holding off a furious top-side challenge from Mason Zeigler, who went against the grain in the bottom-dominant prelims to wrestle his car around the outside lane. “He didn’t run hard enough,” joked Zeigler crewman Bryan Liverman, acknowledging that Zeigler gave it his all racing through an outside groove that wasn’t packed down and was a long way around with the third-mile oval’s infield pushed in farther than normal. … Smith’s heat triumph came after he returned to his North Carolina shop to make repairs to the right side of his Brodnax Shaker Motorsports No. 89 following an accident in Saturday’s Lucas Oil show at Golden Isles Speedway. … Sixth heat polesitter Boom Briggs was running second midway through the race when his car’s rear end broke, bringing an early end to his promising night. … David Breazeale got the worst of Briggs’s heat-race problem; he couldn’t avoid Briggs’s slowing car and and spun on the backstretch, forcing him to the rear of the field. … Trever Feathers’s first-ever night of East Bay action was forgettable. He limped directly into the infield at the start of the first heat when his car’s left-rear wheel came off because the lug nuts were mistakenly left loose; later, in a consolation race, he was forced to the pits with right-front damage after being unable to avoid Vic Hill’s car. … Dennis Erb Jr. was an early retiree from his heat race with a broken U-joint on his machine’s driveshaft. … Jonathan Davenport finished second in the second consy but experienced terminal engine trouble on the final lap, forcing him to pull out his backup car at start at the rear of the feature field. … Provisional starters for the feature are Earl Pearson Jr. and Shanon Buckingham (Lucas Oil points) as well as John Tweed (fastest qualifier who didn’t qualify).

Every heat winner official led flag-to-flag, but runner-up Mason Zeigler swapped the lead with sixth heat winner G.R. Smith in turns one and two late in the final heat. … Heat action set up the same front row as Saturday at Golden Isles Speedway: Tim McCreadie and Devin Moran. … In the first heat, Trever Feathers lost a left-rear wheel on the first lap. … Earlier in the heat, Stacy Boles spun for a lap-seven yellow; Dennis Erb Jr. retired during the caution period while running fourth. … Second-heat front-row starter John Tweed spun alone entering turn three on the first lap. … Jimmy Owens won the caution-free third heat by a whopping 4.743-second margin over Johnny Scott. … In the fourth heat, Blake Spencer ended up perched on the nosepiece of Coleby Frye in turn two, an incident triggered when Stormy Scott got briefly sideways; Frye retired. … Jeff Mathews topped fellow East Bay veteran Kyle Bronson in the fifth heat. … The transfer spots in the final heat were shuffled when second-running Boom Briggs slowed on the backstretch, leaving David Breazeale nowhere to go. Zeigler moved up from fourth to second in the exchange.

Tim McCreadie (39) of Watertown, N.Y., topped qualifiers with a 14.832-second lap. … On a gorgeous Florida day — sunny skies with a high temperature in the low 70s — the East Bay Winternationals kick off with a robust 62-car field that marks the first time the track has reached the 60-car plateau since 2011. … In past years several Lucas Oil Series regulars would sit out the first couple nights of Winternationals action, but every traveler has entered the opener. For the first time the tour is counting regulars’ best five finishes from the scheduled Speedweeks events, prompting racers to run all the races. … Defending Lucas Oil Series champion Jonathan Davenport of Blairsville, Ga., is running his first tour show without the points leader’s orange spoiler on his car in nearly a year. McCreadie holds that honor after winning Saturday’s season opener at Golden Isles Speedway, taking the spoiler from Davenport, who last year grabbed the points lead at the end of Speedweeks and never relinquished it. … Davenport remarked after hot laps that he noticed the East Bay racing surface “was a lot wider” than last year as track management has pushed the infield lower. … Skyline Motorsports teammates Shane Clanton of Zebulon, Ga., and Tyler Bruening of Decorah, Iowa — both first-time Lucas Oil regulars in 2020 — are marking their first starts at East Bay in over a decade. Clanton competed at East Bay multiple times in the 2000s, while Bruening’s only previous visit to the third-mile oval came in his first career Speedweeks appearance (he’s run exclusively at Volusia Speedway Park in Barberville, Fla., since then). … There’s a Virginia section in the pit area with a pair of drivers from the state — Winchester’s Trever Feathers and Waynesboro’s Logan Roberson — parked across from each other in the farthest reaches of the pit area beyond the backstretch. Both are making their first-ever Super Late Models starts at East Bay. … Other East Bay Super Late Model first-timers include Chris Garnes, Pearson Lee Williams, Todd Brennan, Allen Weisser, Kyle Lear, David Seibers, Ken Monahan and Charles Powell. … Veteran Pennsylvania driver Dan Stone is in East Bay’s field again with his Super Deuce, which is equipped with a new Custom RY-45 engine. Saturday’s program at Golden Isles marked the first time in Stone’s career that he ran a Super Late Model event with a Ford powerplant under his car’s hood.

A busy week of action at East Bay is underway Monday with 62 Late Model, the first time the third-mile oval has cracked the 60-car mark since 2011.

Tim McCreadie of Watertown, N.Y., comes into the event as the tour’s lone winner in 2020 after a $12,000 victory Saturday at Golden Isles Speedway near Brunswick, Ga. McCreadie will be among top contenders along with reigning and three-time series champion Jonathan Davenport of Blairsville, Ga., Brandon Sheppard of New Berlin, Ill., Josh Richards of Shinnston, W.Va., and Hall of Famer Billy Moyer of Batesville, Ark., the all-time winningest Winternationals driver with 27 victories.

Along with drivers transferring through heats and consolations, other feature starters will include the fast time provisional (thanks to title sponsor Wrisco).

Driver (car no.), hometown
Group A