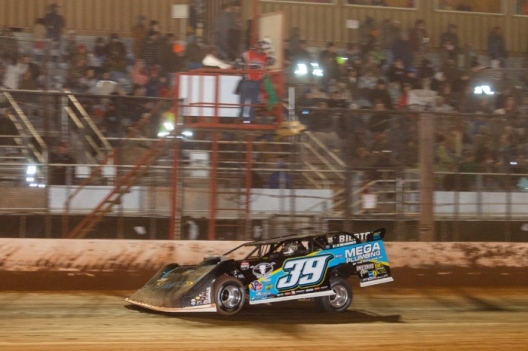 Running virtually unchallenged and surviving a near-calamity amid traffic, McCreadie led all 50 laps to give him some good news to share with “Barefoot” Bob McCreadie, the Hall of Fame big-block modified driver whose health was “turning the corner,” his son said.

“When he started cracking and being rough on everybody with the jokes, we knew he was getting better,” McCreadie said with a halting, emotional voice in victory lane. “They told me to come down here and if anything happens, I can go back home.

“It just shows the dirt track people are just so good to each other, to just say ’Hey, we were thinking about you.’ It’s pretty cool.”

Most everyone watching Saturday’s 50-lapper was also thinking another thing: Can anybody catch McCreadie? The answer was a firm “no” as the 45-year-old World 100 winner led comfortably most of the way, taking the checkers nearly a full second ahead of Brandon Overton of Evans, Ga., who rallied from his 19th starting spot to finish nine-tenths of a second behind the winner.

Brandon Sheppard of New Berlin, Ill., was third followed by Mike Marlar of Winfield, Tenn., and reigning Lucas Oil champion Jonathan Davenport of Blairsville, Ga., who held the second spot early but slipped back to fifth at the finish.

Golden Isles regular Mark Whitener of Middleburg, Fla., who held the second spot all but eight laps and drew within eight-tenths of a second of McCreadie at halfway, got the worst of a scrape with Davenport in turn four on the final lap and never took checkers, settling for 22nd.

McCreadie never let anyone get within striking distance, always pulling away quickly on restarts and frequently holding half- or full-straightaway advantages at the 4/10-mile oval. But McCreadie did have a scare on the 14th lap.

As he raced down the frontstretch, preparing to overtake Earl Pearson Jr.’s slower car, he found the No. 87 of Ross Bailes crossways in the middle of turn one after getting over the cushion and smacking the wall. With a caution flag appearing and Pearson hugging the inside lane, McCreadie deftly slid between Pearson’s car and the damaged machine of Bailes with a sign of relief.

Overton, who started in the 10th row and took second on the 47th lap after slipped by the dueling Whitener and Sheppard — Whitener was struggling on a deflating tire in the final laps — gained on McCreadie in the final laps but didn’t have time to track down the leader.

“We dug ourselves a hole qualifying and didn’t really run good in the heat,” Overton said. “We kind of turned it around in the (consolation race). I felt like we had a really good car. There’s a lot of people that come over to watch me race, and I feel like every year I let ’em down.

“Congrats to Timmy. I don’t want to take nothing from ’em, he deserves it. They work really hard and congrats to them. But I’d like to have seen a caution there late in the race. It felt really good, but like I said, I started too far back … it is what it is.”

Sheppard, who started sixth but slipped back a spot early and didn’t get up to fourth until nearly halfway, felt like he missed an opportunity to win.

“We just need to get clear of them guys a little bit sooner. I was playing too nice, I guess,” the Rocket Chassis house car driver said. “But definitely I’m disappointed for my guys. I think I could’ve done better than what I did there, especially in the early stages of that race. But congratulations to Timmy and Brandon, they both did a really good job.

“I just wish we could’ve done a few spots better for my team. They worked their butts off tonight. We had a really good race car. They gave me everything I needed to win the race. I just needed to do a little bit better job.”

The 50-lapper was slowed three cautions, the most serious on the 14th lap for Bailes, who apparently wasn’t injured despite his car bounding into the air after hitting the concrete wall. Other slowdowns came when G.R. Smith stopped against the turn-one wall on the fifth lap and provisional starter Stormy Scott slowed on lap 30.

Notes: McCreadie scored his 16th career Lucas Oil Series victory and first since Aug. 30, 2019, at Ponderosa Speedway in Junction City, Ky. … He won for the first time at Golden Isles, which saw Friday’s scheduled opener rained out. … Last year’s Golden Isles winners struggled, both taking provisional starting spots after starting deep in consolation races. Tyler Erb of New Waverly, Texas, recovered somewhat to finish 11th (brake problems in time trials got his night off to a rough start) while Earl Pearson Jr. of Jacksonville, Fla., ended up 19th (a broken driveshaft in the consolation dug deep into the track’s surface). … Matt Cosner of Ridgeley, W.Va., was making a bid for the last transfer spot in the first consolation race when he hooked the inside berm in turn three and spun, allowing Shanon Buckingham to escape. … Hudson O’Neal of Martinsville, Ind., had a tough debut for the MasterSbilt house car team. Nosepiece problems contributed to a first-lap heat-race tangle and he didn’t return to the track until the feature with a provisional starting spot. He finished 18th. … Many Golden Isles competitors will head south to East Bay Raceway Park in Gibsonton, Fla., for Sunday’s practice preceding Feb. 3-8 series action at the third-mile oval near Tampa.

Tim McCreadie won the first heat over Mark Whitener by a whopping 3.889-second margin to earn the feature pole position. … The second heat had several slowdowns. On the first lap, Hudson O’Neal got sideways between turns one and two, triggering a wreck that collected Pearson Lee Williams and Chris Blackwell. … Later in the second heat, Brent Larson pulled toward the turn-two exit when he lost a left-rear tire and required a two-wrecker trip to the pits. … The second-heat mayham continued when Joel Callahan spun and clipped the backstretch guardrail while battling Matt Cosner for the final transfer spot. Callahan made slight contact with Cosner and ended up atop G.R. Smith’s nosepiece, sending Callahan for a 360-degree spin with him briefly rising off the track surface. … Blair Nothdurft slapped the guardrail in turns three and four early in the third heat. … Mike Marlar and Dennis Erb Jr. ran side-by-side through the corners much of the fourth heat with Marlar edging ahead for the victory as they both pulled away from the field.

Overall fast qualifier Devin Moran of Dresden, Ohio, improved his hot-lap time by a half-second to post quick time before Saturday’s event with a 14.782-second lap. “We made a couple of little changes and Devin got up on the wheel,” said car owner Tye Twarog, who reunited with Moran in 2020. The team’s new Longhorn Chassis had a stellar debut. … Earl Pearson Jr. of Jacksonville, Fla., slowed on his second qualifying lap, but a crew member confirmed there was no issue and that Pearson pulled up after a “dead push” on lap two. Pearson was 17th quick among 22 cars in Group B. … Tyler Erb of New Waverly, Texas, struggled with a tight car in time trials and was the second slowest qualifier overall after brake problems that nearly sent him into the wall between turns three and four. After time trials, Erb and his crew worked on repairing the right-rear brake caliper, which was likely struck by a chunk of mud, a crew member said. … Billy Moyer Jr. of Batesville, Ark., was third quickest in Group A to reach his goal of a front-row starting spot in a heat race. He’ll line up next to Tim McCreadie. “We’re going to try and beat him, but it’s going to be hard,” said Moyer, who is making his fourth start in a Capital Race Car and praised chassis builder Marshall Green for what Moyer called the best support of his career. “Every time I come off the track he’s on the phone or in my trailer,” Moyer said. Moyer is pitted at GIs next to fellow Capital driver Shane Clanton and across the way from Clanton’s teammate Tyler Bruening.

Every entrant from Friday’s rained out event returned with the addition of Dan Stone of Thompson, Pa., making up a 45-car field that’s the most at Golden Isles since 52 entries in 2017. … Chris Garnes of Evans, W.Va., showed smoke through his Friday hot-lap session and the team discovered a loose oil line that was easily repaired. The problem likely cropped up, Garnes said, after the crew thrashed to repair a broken fan blade and related issues from Thursday’s practice. … Tanner English of Benton, Ky., is set to make his debut with Riggs Motorsports. The team is well-equipped with three brand new Rocket Chassis set for Speedweeks action, two intended for English and one for part-time teammate Jason Riggs, who has already hauled his car to Florida where he’ll compete at East Bay. … Former Lucas Oil regular John Blankenship, formerly of Williamson, W.Va., and now living in Knoxville, Tenn., is making his first start at Golden Isles since 2014 (his best finish in three starts that season was fourth). Blankenship had a lower lift bar break in Thursday’s practice. ... Follow Lucas Oil timing and scoring (unofficial, of course) at MyRacePass.com, which begins a new partnership with the series in 2020. ... The track's Limited Late Model division has 31 entrants with 20 locked in by time trials and the rest going to a consolation race.

While rain washed out Friday’s opener of the RhinoAg Super Bowl of Racing at Golden Isles Speedway, the Lucas Oil Late Model Dirt Series will again try to kick off the 2020 season Saturday with a $12,000-to-win event at the 4/10-mile oval.

Skies are overcast skies and temperatures are cool like Friday but without precipitation as the national tour tries to get Georgia-Florida Speedweeks rolling with more than 40 competitors on the grounds, including three-time and reigning series champion Jonathan Davenport of Blairsville, Ga.

Golden Isles hosts the first of eight Lucas Oil Speedweeks events continuing at East Bay Raceway Park in Gibsonton, Fla. (Feb. 3-8) and All-Tech Raceway in Ellisville, Fla. (Feb. 9). A drivers’ five best finishes will be counted toward points standings provided they maintain perfect attendance through Speedweeks; all other drivers will be awarded 50 points per night.