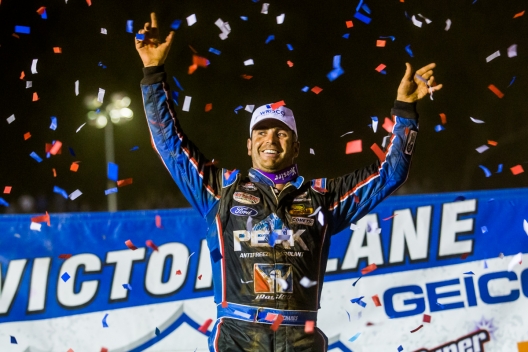 MIDDLEBOURNE, W.Va. (Sept. 1) — A usually reserved Josh Richards was emotional in victory lane following his Sunday triumph at Tyler County Speedway. Turning laps at the quarter-mile bullring since a young age, the 31-year-old Shinnston, W.Va., finally added his name to the list of Hillbilly 100 winners, earning a $30,000 payday.

“It’s awesome,” Richards said. “Going to Pennsboro for this race when I was a kid and then moving here to Tyler County … I used to come here with Robbie Scott and my buddy Jared Hawkins as a kid growing up and as we got older. It’s just so close to home, an hour from where I grew up. I just love coming here. There’s just a lot of friends and family, and the way the track is, it’s so much fun.

“This race is what started all the big races, really. To pay what it did back in the ‘70s, 51 years later, Carl (Short) has done a phenomenal job. It kind of started the trend. It was awesome to finally get the Dirt Track (World Championship). So to get the Hillbilly with it, it’s pretty cool.”

Winning the night’s first heat race to start on the pole of the 100-lap feature, Richards charged to the lead at the drop of the green flag. The third-starting Owens worked the low groove through the early distance, pulling alongside Richards as the frontrunners navigated lapped traffic. It was a tight race through the halfway mark, until a lap-60 caution reset Richards at the front of the field.

Richards stretched his lead on the restart, approaching the tail of the field again on lap 71. As cars raced two- and three-wide in front of the race leader, Owens closed back in. Meanwhile behind the frontrunners, Jonathan Davenport of Blairsville, Ga., Brandon Sheppard of New Berlin, Ill.,  and Tim McCreadie of Watertown, N.Y., were in a tight battle for third, McCreadie holding the advantage when another yellow flag waved on lap 80.

Richards continued to show the way out front when the race went back green, with McCreadie powering ahead of second-running Owens. Charging from the ninth starting spot, Overton made his way into the top five late-race, challenging McCreadie for second when the final caution fell on lap 93.

As McCreadie slipped over the berm in turn two, Overton shot to second on the final lap, with Richards taking the checkered flag by a 1.003-second margin. Richards notched his 28th career Lucas Oil Series victory, his first at Tyler County.

“The bottom had some brown in it and then there was a chop down in three and four,” Richards said. “The the black had a little bit of abrasion and then it was like dust and then there was brown again. So you were kind of fighting a balance the whole time. Once I started maneuvering around in lapped traffic, I felt really good. With seven to go, if you miss the corner just a little bit, you slip and a guy gets a run on the outside, it’s over. So you just have to try to pace yourself. Luckily the car was good enough we could stay out front.”

“I felt like we had a winning car but I ain’t going to sit up here and piss and moan,” Overton said. “It was 100 laps, not 105. Hats off to them guys, I know they needed it. I love coming over here. This place kind fits me. I said it the other weekend at Batesville — we are getting better. Our car’s are getting better, everything we’re doing, our whole program’s getting better. I’m proud of that. To come home second, hell, I’ll take it.”

It was an all-around solid weekend for McCreadie, who scored his first Lucas Oil Series victory of the season on Friday at Ponderosa Speedway in Junction City, Ky., and finished third on Saturday at Portsmouth (Ohio) Raceway Park.

“The longer run, we were really good,” McCreadie said. “It just was hard. It wasn’t as easy to pass as the last few times here. It was just dirt enough to keep a lot of guys … they could kind of run the middle and take up both lanes. That’s part of it. We got rolling on the top a little bit later and the right-front started giving up a little bit off the corner. That’s the worse spot. You need to be able to come down the hill or circle around. We just had a little of that. But all in all, a good run.”

Notes: Richards scored his third Lucas Oil Series victory of 2019. His most recent came in the July 16 stop at Brown County Speedway in Aberdeen, S.D. … Richards is a former World of Outlaws Morton Building Late Model Series winner at Tyler County, his most recent victory coming in May 2016. … The race was slowed by three cautions. … The first yellow flag flew on lap 60 when Travis Brown spun in turn four. … After running as high as fourth, Brandon Sheppard slowed on the frontstretch with a flat tire to draw a caution on lap 80. … The final yellow flag waved on lap 93 when Billy Moyer Jr. dropped off the pace.

Tripping the clock with a time of 12.722 seconds, Tim MCreadie of Watertown, N.Y., was the overall fast qualifier for Sunday’s Hillbilly 100. He’ll start on the pole of the first heat race. As the quickest qualifier in his respective time trial group, Tyler Erb of New Waverly, Texas, will start on the pole of the third heat race. Jimmy Owens of Newport, Tenn., and Kyle Bronson of Brandon, Fla., will join McCreadie and Erb as heat race polesitters.