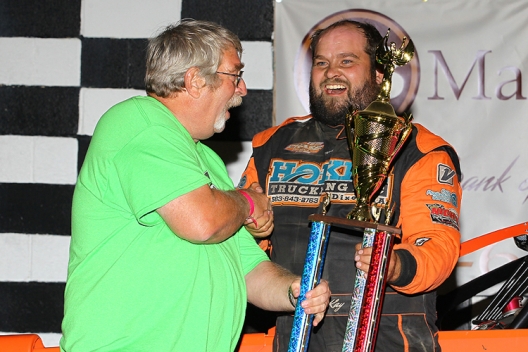 After taking the lead, Kay had to hold off Yankee Dirt Track Classic royalty to secure the win. He stayed just ahead of a charging Chad Simpson of Mount Vernon, Iowa, who started 12th, crossing the line a scant 0.365 of a second ahead of the driver who’s won the event four times, including three straight from 2009-’11.

Chris Simpson of Oxford, Iowa, the defending race winner who won his first Yankee Dirt Track Classic in 2017 (the 2018 event was rained out) finished third after leading the first 30 laps from the pole, while sixth-starting Andy Eckrich of Iowa City, Iowa, finished fourth, his best effort in the event since finishing third in 2009. Jeremiah Hurst of Dubuque, Iowa, the 2008 winner, charged from 16th to complete the top five.

With the seventh-starting Kay five car lengths back in second, Chris Simpson appeared to have the race well in hand until his transmission jumped out of gear, causing him to suddenly slowed entering turn four as he headed to complete lap 30. Simpson rolled up the track as Kay darted by. As quickly as he slowed, Simpson put his car back in gear and took off again. But he’d lost both the lead to Kay and the second spot to his brother Chad Simpson and on a track that became bottom dominant over the second half of the 50-lapper, there was little he could do to regain the positions.

Looking for a record-tying fifth Yankee Dirt Track Classic victory, Chad Simpson closed to Kay’s rear deck with 10 laps remaining, but while he was able to close on the leader off of turn four and down the front stretch, Kay managed to put a couple of car lengths on the second-running Chad Simpson as they raced off of turn turn. He kept his bright orange No. 15k pinned to the low grove, avoided traffic and streaked to his second career Malvern Bank Super Late Model Series victory.

The top 10 finishers from Friday’s $5,000 preliminary feature were locked into Saturday’s main event. They went to a redraw and were split into two five-lap dashes, which were won by Chris Simpson and Charlie McKenna of Ames, Iowa. The rest of the starting lineup was determined by four heats, two consolation races and a last-chance race, which Jeremy Grady of Webster City, Iowa, won to earn the 27th and final starting spot.

Notes: After finishing in the top five of the historic event four times, it was Kay’s first Yankee Dirt Track Classic win. He finished third in both 2017 and 2015 and had fourth-place finishes in 2014 and 2012. … Sixteen of the 27 starters finished the race, all on the lead lap. … Kay’s previous Malvern Bank Series win came May 18, 2018 at Off Road Speedway in Norfolk, Neb. … Andy Eckrich’s fourth-place run was his best finish since 2009, when he placed third. Eckrich, who was also third in 2005, has four top-five finishes in the event. He was fifth in 2014. … The night ended early for Thursday winner Jeff Aikey of Cedar Falls, Iowa, whose chance at back-to-back victories came to an end when contact with Charlie McKenna on a restart sent Aikey up the track and into the wall at the end of the front stretch. Aikey, who was running second at the time, finished 24th. … McKenna and Corey Zeitner of Omaha, Neb., had their night end on lap 22 when McKenna spun following contact from Chad Simpson and subsequently collected Zeitner. … Jason Rauen of Farely, was relegated to 26th after contact from Tyler Bruening of Decorah, Iowa, sent him in the infield wall on the back straightaway. … The race was sanctioned by the Malvern Bank Series for the first time after carrying IMCA Deery Brothers Summer Series sanctioning from 2012-’17. … The Nebraska-based tour made its first-ever visit to 300 Raceway. … With neither Friday or Saturday points events, Malvern Bank Series points leader Kyle Berck was not in attendance. … Steve Kosiski of Papillion, Neb., leads all drivers with five Yankee Dirt Track Classic wins.