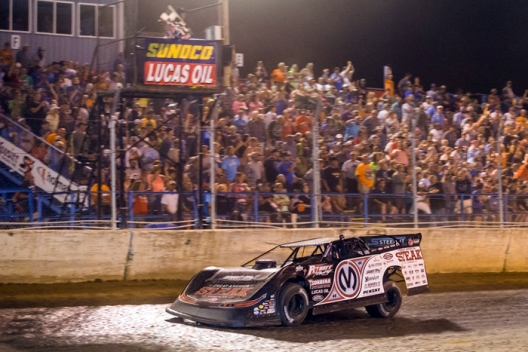 “This is awesome,” Madden said after Saturday’s race. “It’s just flat awesome. We’ve busted our butts to put this thing together. Thanks to Scott (Bloomquist) and Cody (Sommer) for allowing me to do this. It’s unbelievable, really. What an awesome piece of equipment that they have equipped me with and put me back to racing. It’s an unbelievable feeling.

“It’s humbling for sure. I’ve been struggling for so long the last few months. Sometimes you question yourself at times. But when you get back into a good piece of equipment like this, it’s a pretty cool feeling. My confidence level come back immediately.”

Winning both of his Friday heat races to start on the pole of Saturday’s 100-lapper, Owens charged to the front of the field at the drop of the green flag. The frontrunners approaching the tail of the field by the 12th circuit, hard-charging Bobby Pierce of Oakwood, Ill., began reeling in the race leader, sliding ahead of Owens into turn two to assume the point on lap 19.

Running a close second, Owens closed the gap between himself and Pierce as the pair worked through lapped traffic, edging ahead out of turn four to retake the lead on lap 34. While it was a battle for position behind him, Owens continued to show the way out front through a string of mid-race cautions. It was the lap-72 caution for Pierce and ensuing restart that set the tone for the remainder of the race.

Gaining momentum from the restart, 10th-starting Madden was able to pull alongside Owens and challenge for the lead. The pair raced door-to-door out of turn four, with Madden nosing ahead at the stripe to grab the lead with just 25 laps remaining in the distance. Despite a lap-96 caution that bunched the field up one last time, Madden was able to cruise to his third victory in as many starts.

“I knew I had to put myself in a certain position,” Madden said. “I had to get guys when I could get a couple of them and I had to make sure that I was getting into the top two rows on restarts to be able to get a guy here and there. The racetrack, at one time, you could only inch on a guy. You couldn’t really just drive by a guy. You could just inch on him and inch on him.

“I knew that I had a great race car because I was able to run in traffic and not be loose and have traction and have sidebite. So I knew if I could ever get to the top three, that I had a race car that if I could get some clean air on, I had a shot to win it.”

Overtaking Owens in the final circuits, the 18-year-old O’Neal finished runner-up, with Owens settling for a third-place finish after leading laps 1-18 and 34-75. Advancing from the 14th starting spot, Devin Moran of Dresden, Ohio, ran fourth, with Zack Dohm of Cross Lanes, W.Va., rallying from the 22nd starting spot to round out the top five.

Fending off Mike Marlar of Winfield, Tenn., though the race’s middle stages and Devin Moran of Dresden, Ohio, late-race, O’Neal shot ahead of Owens on the final restart to post a career-best runner-up finish in the Florence crown jewel.

“We’re happy,” O’Neal said. “Second-place finish in a big $50,000 isn’t too bad. We wanted to win that one. I had the race car to win, I feel like, in the beginning and then I kind of faded there in the middle and was a fourth, fifth-place race car. And then it came back to me there at the end and I was able to get around Jimmy (Owens). I don’t know if I had anything for Chris (Madden) but I felt like I stayed with him pretty good there at the end. But we ran second and he won the race.

“But we’re all smiles. The way we’ve been running lately, it’s really refreshing to run this good. I love this place. We ran third last year and second this year, so surely we’re coming up on one.”

After suffering heartbreak while leading Thursday’s North-South Shootout, Owens was positioned for a rebound, looking as though he might end the night with his fourth-career North-South 100 victory. He just wasn’t able to fight off the red-hot Madden.

“I’m a little disappointed,” Owens said. “But it’s part of leading here. You don’t know where the groove’s going to be. I don’t know how many times, if any, that a polesitter won this race. We were just moving around, searching. The car felt good. I could see Madden under me a little bit but he never was good enough to gain on me. Then I decided I’d move down and when I moved down it messed our rhythm up. I don’t know if we could of held him off any toward the end. But maybe we could have held the lead for a little while longer anyhow.”

Lap 87: Madden stretches his lead, while Owens and O'Neal battle door-to-door for second.

Lap 80: Josh Richards slows on the frontstretch to draw a caution. Madden and Owens were in a tight battle for the lead when the yellow flag flew.

Lap 75: Madden and Owens cross the line side-by-side with Madden inching ahead to take the lead.

Lap 72: A yellow flag waves when Pierce gets into the turn-four wall, coming to a stop. Owens leads Madden, O'Neal, Weiss and Moran.

Lap 39: Charging from the 23rd starting spot to run in 10th, McCreadie slows with a flat tire to draw a caution. Owens leads Pierce, O'Neal, Chris Madden and Scott.

Lap 34: Reeling in Pierce in lapped traffic, Owens edges ahead out of turn four to retake the lead.

Lap 19: Sliding ahead of Owens into turn two, Pierce takes the lead.

Lap 18: A yellow flag waves when Kyle Bronson slows on the backstretch with a right-rear flat. Owens leads O'Neal, Pierce, Bloomquist and Scott. Tim McCreadie has charged from 23rd to 13th.

Lap one: The green flag waves at 9:40 p.m. A yellow flag flies on the opening lap when Zak Blackwood spins in turn two, bringing the race to a complete restart.

9:32 p.m.: Feature cars have made their way to the frontstretch. Drivers have been given the call to start their engines and are rolling out for pace laps. Driver introductions will be in-car.

Outside polesitter Brandon Overton shot ahead of fellow front-row starter Zack Dohm down the backstretch to take an early lead, while third-starting Tim McCreadie slipped back to fifth on the start. Fourth-starting Jason Jameson challenged Dohm for second in the early distance, with Dohm moving up a groove to fend off his charge. Overton held a comfortable lead at the halfway point, with a yellow flag waving on lap eight when Roger Williams spun on the frontstretch. Fifth-running McCreadie retired under the caution, electing to use a provisional to start the main event. The top-two cars pulling away from the field late-race, Overton won the consolation, with Dohm finishing second to transfer to the feature.

Polesitter Nick Hoffman shot to the front of the field at the drop of the green flag, holding a comfortable lead in the early running. Fourth-starting Shanon Buckingham challenged Dale McDowell for second on the fifth lap, with McDowell maintaining his advantage. Stretching his lead to nearly a full straightaway, Hoffman won the consolation, with McDowell taking the second and final transfer spot.

Rolling around the outside, second-starting Mike Benedum took an early lead, with fourth-starting Josh Richards challenging polesitter Donald McIntosh for second in the opening laps. Eighth-starting Josh Rice was on the move early until disaster struck on lap six. Battling for fifth, Rice made contact with Michael Norris, spinning to a stop in the top of turn four to draw a caution. Josh Richards and Kent Robinson split second-running McIntosh on the restart, with Richards moving into the runner-up spot. Robinson slid ahead of Richards in turn four on the white-flag lap but wasn’t able to make the pass stick. Fighting off Robinson’s challenge, Richards slowed his charge and the pair made contact in the top of turn two on the final lap. Unchallenged, Benedum won the consolation, with Richards running second to transfer to the feature.

Among the 16 drivers locked in to Saturday’s feature through combined passing points, five are making their first-ever North-South 100 start. First-timers include Stormy Scott of Las Cruces, N.M., Tyler Erb of New Waverly, Texas, Devin Gilpin of Columbus, Ind., Zak Blackwood of Columbus, Ind., and Kyle Strickler of Mooresville, N.C. … On the opposite end of the spectrum, five of the 16 drivers locked in to Saturday’s main event are former North-South 100 winners, including Jimmy Owens of Newport, Tenn., Scott Bloomquist of Mooresburg, Tenn., Bobby Pierce of Oakwood, Ill., Ricky Weiss of Headingley, Manitoba, and Jonathan Davenport of Blairsville, Ga. … Among drivers who have already scratched from Saturday’s program are Scott James of Bright, Ind., Greg Johnson of Bedford, Ind., and Kevin Weaver of Gibson City, Ill. Weaver was inducted into the National Dirt Late Model Hall of Fame on Saturday afternoon. … Ranking 17th in Friday’s combined passing points, Donald McIntosh of Dawsonville, Ga., was just one spot shy of being locked in to Saturday’s 100-lapper. He’ll start on the pole of the evenings first consolation. McIntosh’s strategy heading into Saturday’s program is simple: “Win the consy and make the show,” he said. “I think we’ve got a pretty good car and something good to work off of. We’ll see how the racetrack is and hopefully we can keep it in the front.” … Dale McDowell of Chickamauga, Ga., stood outside of his team’s hauler Saturday afternoon, considering just where he would have needed to finish in his Friday preliminaries to be among the drivers locked in to Saturday’s show. Starting outside the front row in the evening’s second consolation, McDowell said track conditions will play a big factor early in the night. “I got banged around a little bit on the starts of the heats and things just didn’t go our way,” McDowell said of Friday’s prelims. “The track conditions will be a little bit different, so we’ll just have to see. Our car’s usually better when it gets slicker. But we’ll be in an early B-main. We’ve got a good starting spot, it’s just everybody goes hard early and it seems like it’s caution to the wind, wherever you land.” … Finishing third in Thursday’s North-South Shootout, Zack Dohm of Cross Lanes, W.Va., is looking to qualify for the North-South 100 for the third straight season. He starts on the pole of the stacked third consolation. “I’ve got (Brandon) Overton on the outside of us and (Tim) McCreadie and (Jason) Jameson behind us,” Dohm said. “So we definitely can’t afford to take it easy. Hopefully we’ll just get a good start, not very many cautions, and stay in the top two.”

The 37th annual Sunoco North-South 100 wraps up Saturday night at Florence Speedway with the $50,000-to-win finale. The first eight rows of the feature lineup have already been set by a double round of heat races contested on Friday night.

Based on Friday’s combined passing points, Jimmy Owens of Newport, Tenn., and Scott Bloomquist of Mooresburg, Tenn., will start on the front row of Saturday’s feature. Owens’s last North-South 100 victory came in 2011, while Bloomquist’s last triumph in the Florence crown jewel dates all the way back to 2000.

Saturday’s program will include three 15-lap consolations, with the top-two finishers from each transferring to the 100-lap main event. Series provisionals will make up the final rows of the feature lineup. The show will also include a non-qualifiers’ race and a $2,000-to-win modified feature.