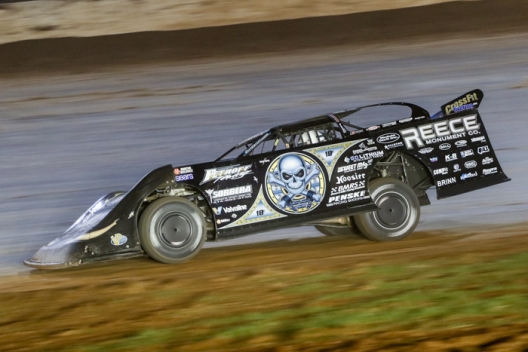 Rolling around the high side of the racetrack, Bloomquist powered from fourth to first to at the drop of the green flag, stretching his lead as he worked his way through lapped traffic. Never seriously challenged at the front of the field, the Hall of Famer led flag-to-flag, notching his 32nd career World of Outlaws victory.

“This track’s so fast,” Bloomquist said. “You really can’t look around. I didn’t see anybody signaling or giving me any kind of hope of whether I could relax or not. We just raced the whole race just like somebody was right on my ass. I’m looking at the right-rear tire and it’s slick. It could have went maybe 10 more laps. We didn’t ease up at all. But we really weren’t spinning either. The car was hooked up from the drop of the green.

“They always come over the radio and say, ‘Remember boys, you can’t win this on the first lap.’ I thought, ‘Well, I think we might have done that.’”

After running fourth in Saturday’s matinee, Bloomquist was aiming for a better finish in the evening portion of the event. Outside polesitter Kent Robinson of Bloomington, Ind., pulled alongside the race leader on an early restart but was unable to make the pass for the lead. Bloomquist would go the rest of the distance unchallenged, extending his lead to more than a full straightaway at the checkered flag.

“I got a good feel in the previous race,” Bloomquist said. “In the past year’s, we’d look back and we were a little bit tight. So I just left the car freed up, left it alone like it was qualifying. And the stagger in it ended up growing a little bit more than we wanted and the car was jus too free. So we went back and regrouped for the race this evening and made a few adjustments to the car and the stagger. And what else can you say? It was pretty sweet.”

Failing to crack the starting lineup for the afternoon feature, Davenport, the 2018 Lucas Oil Late Model Dirt Series champion, was determined to end the World Finals weekend on a high note. Working his way through the field to race among frontrunners at the halfway mark, Davenport overtook second-running Marlar on lap 38. He was hoping to see a yellow flag wave in the final laps to see how he stacked up against Bloomquist.

“I’m sure (Bloomquist) was really good,” Davenport said. “But my car was really good too. We started back in the field and we come through most of the field in the bottom there. It kind of died and I found the top in (turns) one and two and it was really good for us. I’ve just got to thank all these guys on this crew. They’ve really been working hard this weekend. It hasn’t shown too much this weekend. We battled back.

“We missed it in the heat race. I really thought we was going to have a good heat race here with (Marlar). But we just missed it a little too much and was way too free. Then we had to start 13th and come up through there. … About halfway there, the breather broke off. I was trying to count the laps on the motor and how much it was going to cost. But we had such a bad weekend we wanted to finish off strong.”

After winning Saturday’s matinee, Sheppard moved to second in the World of Outlaws points standings, sitting just 34 points behind Marlar entering the evening portion of the event. While he was unable to come away with a second consecutive national tour title, Sheppard was still pleased with his 2018 performance.

“It was a great year all in all,” Sheppard said. “Five DNFs. That’s all we can say about that. Next year we’ve got to come back with our stuff together and finish races. That’s the key. We’ve got the most wins out of everybody on the tour and that just shows how awesome my team is. We’ve gotten behind quite a few times and came back from 50-60 points behind. But all in all it’s been a great season for us.”

Notes: The race was slowed by four cautions. … The first yellow flag waved on lap eight when Tyler Erb slowed in the top of turns one and two. … Jackie Boggs drew a caution on lap nine when he got into the wall in turn two. … A yellow flag waved on lap 21 when Pat Doar slowed on the backstretch. … Donny Schatz spun on the frontstretch to draw a caution on the ensuing restart.

Polesitter Shane Clanton charged to an early lead, as Boom Briggs and Ross Robinson battled for third. The top two cars distanced themselves from the field at the halfway mark, with second-running Don O’Neal closing the gap between himself and Clanton. Outrunning O’Neal, Clanton won the consolation, with O’Neal finishing second to transfer to the feature.

Edging ahead of polesitter Tyler Bare out of turn four, fourth-starting Max Blair led the opening lap. A yellow flag waved on the first lap when Bare got sideways in turn four while challenging Blair and Jimmy Owens at the front of the field, collecting Mike Benedum. Blair and Owens raced door-to-door on the restart, with Owens pulling ahead at the line to take the lead. Another yellow flag waved on lap three when Bare tangled with Brian Ledbetter in the bottom of turns one and two. Owens held his lead on the restart, with Chris Ferguson rolling around the high side to challenge Blair for second. Sliding ahead in turns one and two, Ferguson claimed the second-place spot at the halfway mark. Stretching his lead late-race, Owens won the consolation, with Ferguson taking the second and final transfer spot.

Sliding ahead of fellow front-row starter Steven Roberts in turns one and two, outside polesitter Jackie Boggs took an early lead, with Donny Schatz slipping past Roberts to take the second-place spot. Boggs began stretching his lead at the halfway mark, with third-running Devin Moran closing the gap between himself and Schatz. Boggs won the consolation, with Schatz holding off a charging Moran to finish second and transfer to the feature.

Rolling around the top side, second-starting Earl Pearson Jr. shot to an early lead, with polesitter Don O’Neal slipping back to fourth. A red flag fell on lap five when Tyler Horst came to a stop in the top of turn two, flames shooting out of his No. 14. Pearson held his lead on the restart, with Overton challenging second-running Tyler Erb for position. Never seriously challenged up front, Pearson won the heat, with Erb finishing second. Overton grabbed the third and final transfer spot.

Polesitter Kent Robinson charged to the front of the field at the drop of the green flag, as fourth-starting Rick Eckert slipped past Shane Clanton to challenge Pat Doar for second. With Robinson continuing to lead at the halfway mark, a yellow flag waved on the fifth circuit when fourth-running Jason Jameson got into the wall in the top of turns one and two. Ross Robinson used the restart to his advantage battling Clanton for fourth. Robinson pulled away late race to win the heat, with Doar and Eckert rounding out the podium.

Polesitter Dale McDowell led the opening lap, with third-starting Brandon Sheppard in tow. With the top three cars distancing themselves from the rest of the field, McDowell, Sheppard and Tim McCreadie raced single-file at the halfway point. A yellow flag waved on lap five when Kyle Hardy came to a stop in the top of turn two. Fourth-running Chris Ferguson spun on the backstretch to draw a caution on the ensuing restart. Sheppard challenged McDowell on the restart but the race leader maintained his advantage. McDowell won the heat, with Sheppard finishing second. McCreadie ran third to transfer to the feature.

A red flag fell on the first lap when Zack Dohm and Jimmy Owens tangled in turns one and two while battling for a transfer spot. Dohm rolled his No. 17 machine, coming to a rest at the top of the track, with Owens pitting and returning to the tail of the field. Chase Junghans held his lead on the restart, as third-running Dakotah Knuckles fell back to the rear of the field after slipping over the berm in turns one and tow. A yellow flag waved on lap three when Mike Benedum spun in turn four, collecting Knuckles, who retired to the pits. Junghans maintained a comfortable lead at the halfway mark, as Owens attempted to work his way back up through the field. Junghans won the heat, with Benji Hicks and Justin Williams transferring to the feature.

Polesitter Scott Bloomquist began stretching his lead in the early running, as Jackie Boggs attempted to reel in second-running Casey Roberts. Bloomquist held a full straightaway lead at the halfway mark, with eight-starting Dennis Erb Jr. rolling past Donny Schatz to run fourth. Never challenged up front, Bloomquist won the consolation, with Roberts running second. Erb edged out Boggs at the line to finish third and transfer to the feature.

Polesitter Mike Marlar shot to an early lead, as third-starting Chris Madden challenged Jonathan Davenport for second. A yellow flag waved on the opening lap when Jason Covert and Darrell Lanigan collided, tangling in turn three and collecting Devin Moran. Davenport and Madden raced side-by-side for second on the restart, the advantage going to Madden. Marlar held a comfortable lead at the halfway mark, with the frontrunners racing single-file. Stretching his lead late-race, Marlar won the heat, with Madden and Davenport rounding out the podium.

The World of Outlaws World Finals wraps up on Saturday evening with the second of two 50-lap, $12,000-to-win World of Outlaws Craftsman Late Model Series events. Brandon Sheppard of New Berlin, Ill., was the winner of Saturday's matinee.

With rain halting the second half of Thursday’s second round of time trials, Saturday evening’s program will include the completion of Group B qualifying. Mike Marlar of Winfield, Tenn., was the fastest qualifier in his respective time trial group and will start on the pole of Saturday night’s first heat race.

Opening ceremonies for the evening portion of Saturday’s program are scheduled for 4:45 p.m. Eastern. Along with Late Models, big-block modifieds and World of Outlaws Sprint Cars will be in action. DirtonDirt.com is offering live pay-per-view coverage of the event.