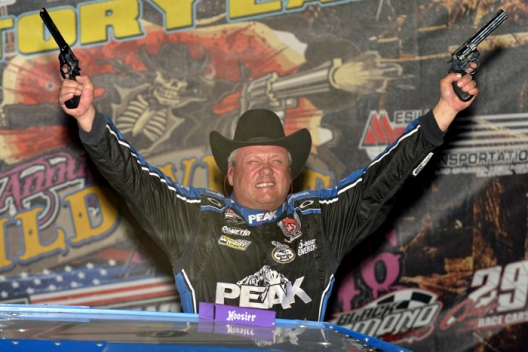 TUCSON, Ariz. — The two drivers going door-to-door for a lucrative bonus at the 10th Keyser Manufacturing Wild West Shootout started on the front row Friday evening and went right down to the wire at USA Raceway.

Don O’Neal of Martinsville, Ind., who lost his race-long lead to Jonathan Davenport with two laps remaining, edged back ahead to grab a $5,000 payday in the fourth round of Arizona’s winter miniseries.

With his victory in the nonstop 30-lapper, O’Neal matches Davenport with two victories apiece at Tucson. With two miniseries events remaining, both drivers have a shot at a $50,000 bonus if they can manage to sweep Saturday and Sunday’s events.

The 51-year-old O’Neal’s victory ended Davenport’s pursuit of the $100,000 bonus going to any driver winning five of six races, part of the Keyser Quarter-Million Challenge that also posted $250,000 to any driver with six victories.

Davenport, of Blairsville, Ga., stayed right with O’Neal most of the way and slipped underneath him exiting turn four to lead lap 28. But O’Neal kept rolling in the high groove to sweep back ahead and take the checkers a half-second ahead of Davenport, who had won the previous two miniseries events.

O’Neal credited Clint Bowyer Racing crew members with helping him win at the 3/8-mile oval where he captured last Saturday’s opener. “They make my job easy,” O’Neal said after donning a cowboy hat in victory lane and firing blanks from a couple of six shooters.

“I felt like the bottom was as good as the top, but I really didn’t know what line” to take, said O’Neal, who received signals from crew members. “So I just stuck with them and it worked.”

While the third- through sixth-place finishers had solid runs, including Francis grabbing fourth after just four laps and Gustin charging on the high side from the eighth row, it was basically a two-car race between the most recent Lucas Oil Late Model Dirt Series champions.

O’Neal lapped his first competitor on the 10th lap and held a half-second lead, but that margin was cut in half by lap 15 with Davenport briefly pulling side-by-side with O’Neal entering turn one.

When O’Neal put Garrett Alberson a lap down on lap 25 with a turn-three slide job, he briefly got a little breathing room, but Davenport was suddenly hot on his heels a half-lap later and eventually moved ahead on lap 28, leading by three-hundredths of a second.

O’Neal went back to work to regain the point on lap 29, leading by seventh-hundredths of a second and then edging away over the final lap to wrap up the victory.

“We nearly came back there at the end,” the 32-year-old Davenport said. “We’ve still got a little work to do on these shorter races. The car was excellent. We just left it a little too free tonight. We tried some different things and probably should’ve just went back to what we had been doing.”

Sheppard made up a little ground on the frontrunners in the second half of the race in scoring his best finish of the miniseries.

“We’re making improvements on the car … the track’s pretty tricky out here, you know (and) these tires are tricky, too,” said the 22-year-old driver. “We’ve been working our butts off and we’re finally starting to (get something) to show for it a little bit. Hopefully, I’d like to get a win before the end of the deal, but if I can stay in the top three, I’ll be happy.”

“We just spotted them guys too much,” the 48-year-old Francis said. “It’s hard to say you start eighth and spot ‘em too much, but when you put O’Neal and Davenport and Sheppard all up in front of you, you’ve got your hands full.

“We had a good race car. We could get kind up besides Brandon up off the corner, but he had that momentum around the top. Don and J.D., they weren’t too far out there in front of us, so we’re making gains on it.”

The final weekend of the miniseries continues Saturday with another $5,000-to-win Super Late Model event. DirtonDirt.com’s pay-per-view begins at 3:15 p.m. Mountain Time with hot laps scheduled for 3:30 and racing at 5.

Notes: As with many unsanctioned events, drivers push the envelope with aerodynamic enhancements, and runner-up Jonathan Davenport noted that winner Don O’Neal’s left sailpanel didn’t match the right, typically a requirement in most series rulebooks. “Don did a good job,” Davenport said. “He must’ve gotten a little cold and had to roll that left-rear window up on us, but we’ll see how that works out.” … Friday’s miniseries newcomers: Home-state drivers Lonnie Parker Jr., Craig Parker and Brad Williams … Joey Moriarty’s night ended against the wall between turns one and two while battling with Tyler Erb in the third heat. … Scott Ward led the first half of the fourth heat, but smashed the turn-four wall after Jonathan Davenport slid by to take the lead. … James Laing broke a motor during the fourth heat and was pushed off the track after dropping fluids in the racing groove. … Jake O’Neil and Ricky Weiss tangled while battling for third on the final lap of the fourth heat. … Drivers starting their first features of the week: Sean Bray and Billy Franklin (Austin Siebert had qualified for a previous feature but scratched, so he also made his first start).