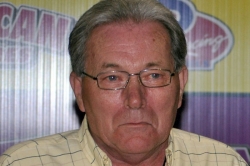 Ernie Shelton, founder of the long-running USA 100 and a longtime announcer and promoter at Beckley (W.Va.) Motor Speedway, died this morning after struggling with health issues in recent years. He was 66. | USA 100 history

Shelton's announcing career began when he was 16 and he eventually moved into promoting, founding the USA 100 in 1977. He later began publishing the "Racing America" magazine and got into broadcasting with the Racing American Network, according to a 2016 story in the Beckley Register-Herald.

Shelton was inducted into the West Virginia Motorsports Hall of Fame in 1999 and later appointed to the state's Motorsports Council advisory board.

"I'm not sure if there is anyone who has done more to promote motorsports in West Virginia," former Register-Herald sports reporter said in the 2016 article.

Look for a complete obituary later at dignitymemorial.com/obituaries/beckley-wv/ernie-shelton-8938822.