Editor's note: DirtonDirt.com's new DirtWire feature is a collection of quick-hitting tidbits from around the Dirt Late Model world:
May 2111:33 AM ET
Posted by DirtonDirt.com staff 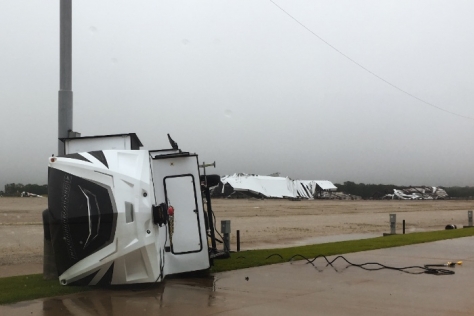 Lucas Oil Speedway officials this morning announced the postponement of the 27th annual Show-Me 100 after a severe storm with high winds blew through Wheatland, Mo., Monday night, causing significant facility damage and injuring four campers who arrived ahead of the race. | Slideshow | Story

New dates for the $30,000-to-win crown jewel event, scheduled for Thursday-Saturday at the 3/8-mile oval in southwest Missouri, haven’t been announced. Track and series officials are evaluating a makeup weekend and are expected to have an announcement on May 28.

"Our first thoughts are for the people of the Wheatland community and the area and we are thankful that there were no fatalities," said Lucas Oil director of racing operations Dan Robinson via a press release. "Our thoughts and prayers go out to all who were affected."

In an early Tuesday interview with KOLR-TV, track general manager Danny Lorton said there is “structural damage to some buildings, our off-road grandstands are gone, we lost grandstands up top for our dirt track speedway, our camping area we lost fencing. There's just a lot of structural damage where we won't be able to operate.”

Showing video of grandstand damage and toppled recreational vehicles, KOLR-TV reported that four people from the racetrack were taken to Citizens Memorial Hospital in Bolivar, Mo.; another televised report said the injuries weren't life-threatening. Three others checked out by emergency responders refused treatment.

The Hickory County Office of Emergency Management told OzarksFirst.com that strong winds knocked over RVs with residents inside while other homes and businesses in Wheatland suffered damage. Storms downed power lines and trees across Highway 83, blocking the road and forcing detours through Hermitage, according to the report.

“We are surveying the area tonight without any power and will know more in the morning. Please try to stay safe as the remainder of the storms pass through tonight,” the post said. “Please keep all involved in your thoughts and prayers as we evaluate the situation. We will provide updates on Tuesday morning as we are able to evaluate and assess the damage. Thank you for your patience in this difficult time.”

The Show-Me 100, which originated at West Plains (Mo.) Motor Speedway and moved to Wheatland in 2010, has been held on Memorial Day weekend every year since 1993 except for 2015, when rain forced postponement of the main event to July 12.