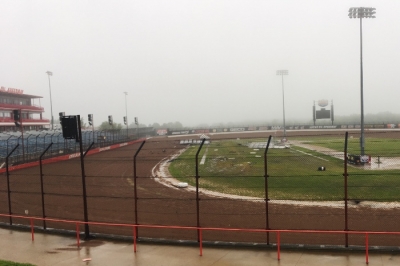 Those hunkering down in Dirt Late Model haulers during Monday night’s severe storm in Wheatland, Mo., knew Lucas Oil Speedway was taking a beating from high winds that rocked the transporters.

But the realization of damage throughout the grounds, including the destroyed grandstands of the off-road track, toppled recreational vehicles and ripped down fencing, didn’t completely sink in until daybreak Tuesday. | Slideshow | DirtWire

“I don’t think we realized it was quite as bad while it was going on,” Lucas Oil Late Model Dirt Series driver Shanon Buckingham of Morristown, Tenn., said. “I think it would have scared us a little bit.”

Veteran Clint Bowyer Racing crew member Anthony Burroughs saw some of the devastation when the weather calmed after midnight, “but then waking up this morning in the daylight you could really see it. We’re pretty blessed nobody lost their life.”

The storms track officials described as including a “possible tornado” forced the postponement of the weekend’s 27th annual Show-Me 100 after a frightening night that sent four campers to a Bolivar, Mo., hospital with non-life threatening injuries and left a massive cleanup job before the state-of-the-art facility, one of the most popular tracks in Dirt Late Model racing, returns to operation.

“Our first thoughts are for the people of the Wheatland community and the area and we are thankful that there were no fatalities,” Dan Robinson, the track’s director of racing operations, said in a press release. “Our thoughts and prayers go out to all who were affected.”

Officials hope to announce a plan to reschedule the Show-Me 100, the $30,000-to-win event that’s among the sport’s crown jewels, by the end of the month, but the racing community’s thoughts first turned to teams and fans that had gathered at the track ahead of Memorial Day weekend.

Cameras from KOLR-TV early Tuesday morning showed the facility’s damage along with several RVs that had rolled over, injuring several occupants with four being transported to Citizens Memorial Hospital. Hall of Fame driver Bob Pierce’s niece, Tracy Coleman Isaacson, her husband and a friend were among those taken to the hospital with “very serious” injuries,” according to Angie Pierce, Bob’s wife and the mother of former Show-Me 100 winner Bobby Pierce. “We love them and are praying for their speedy recovery!”

Elsewhere in the tiny community of Wheatland, the Hickory County Office of Emergency Management reported that strong winds damaged several homes and businesses, downing power lines and trees across Highway 83 that forced detours through Hermitage. Much of the area was without power.

In an early Tuesday interview with KOLR-TV, track general manager Danny Lorton said there is “structural damage to some buildings, our off-road grandstands are gone, we lost grandstands up top for our dirt track speedway, our camping area we lost fencing. There’s just a lot of structural damage where we won't be able to operate.”

Those surviving unscathed told DirtonDirt.com about riding out the storm in the paved pit area.

Erb and his Best Performance crew members, Randall Edwards and Colbey Richman, were watching the film Straight Outta Compton around 11 p.m. when the team transporter started rocking from side to side, sending them to find shelter in a bathroom behind the pitside bleachers.

“So we opened the window and trash cans were flying and Randall suggested: ‘We probably need to get out of here.’ We all got dressed, put our legs down on our trailer and ran to the storm shelter,” Erb recounted. “We stayed in the storm shelter for probably 30 minutes, and then when it died down we walked back out in the pits and there was stuff everywhere. The off-road grandstands were down, campers were flipped over, fences were down. … then ambulances showed up, and fire-rescue. It was like chaos for about two hours.”

Burroughs, crew chief for former Lucas Oil Series champion Josh Richards, was in the CBR rig when the storms rolled in.

“Casey (Bowyer) had texted me earlier and told me there was some storms coming so I was watching my phone,” Burroughs said, referring to the brother of NASCAR driver and team owner Clint Bowyer. “It was weird, though, because you could see the red on the phone getting closer, but there were no warnings whatsoever. It happened so fast. You just heard a noise, the truck got to rocking pretty good, you could feel it kind of getting light, and then there was just massive noise outside. It was raining so hard you couldn’t see out the window, and then it was over with.

“It lifted up one of our four-wheelers and we couldn’t find it. We had to get on our other four-wheeler and ride around, and it was up against the fence down in turn three. That’s nuts, man. I’ve been in tornadoes before down in Alabama, but I’ve never been in one in the rig. It was a little scary. It wouldn’t have took much more to tip us over.”

“It was lightning and all the typical stuff. It’s been really windy since we’ve been here. The wind picked up,” Buckingham said. “But we did notice in the truck a violent jerk, almost like somebody ran into it with a four-wheeler or something. It just started doing that, so you could tell the winds were picking up.

“Roger even made the comment that maybe we should turn sideways because it was hitting us perfectly sideways like it might turn you over. But we were still laughing and going on about it. But it went from that to pretty intense all at once.”

Buckingham found a spot where he felt safest during the worst of it.

“It got rough enough that I got out of my seat sitting at the table and went and got in the middle of the toter because I thought it was going to blow the windows out of it,” he said. “Every window in it was seeping water from all the way around the seal. I wouldn’t say it was scary but I was concerned enough that I got down and went to the middle of the toter and sat down between the walls. That’s what I do when I’m not racing, is storm recovery work, and I’ve seen some really bad tornados. I know what they can do.”

The teams emerged from their haulers later to see extensive damage throughout the grounds that includes a 3/8-mile dirt oval, 1.3-mile off-road course and Lucas Lake, which hosts drag boat events.

“There was a camper on the pit shack,” Erb said. “All the bleachers from (outside turns) one and two are laying in the middle of the racetrack; they had to get picked up and blown over the catch fence and set down in the infield near three and four. The off-road track grandstand is destroyed. The roof of the press box is messed up.

“Some of them campers, there’s nothing but the frame left. They’re destroyed. If there were 40 campers there, there were two of them that didn’t flip over. Every other one flipped over. One was in the pond. One was on the pit shack. They were wiping out fences. Them campers were flying around and did some damage.

Buckingham discovered that part of the facility he was admiring on Monday was destroyed by midnight.

“The sheltered stands (for the off-road track) back here are just directly in front of our truck,” he said. “Roger and I had went earlier that day on the four-wheeler and went fishing. We made a big circle because he just purchased some new bleachers for Smoky Mountain Speedway (in Maryville, Tenn.), so we wanted to look at those because they were designed a little bit different. We climbed up on top of them, we were all over them and we were commenting on what a nice building it was.

“As soon as it had passed enough that we could see through the lightning, that whole building that Roger and I were in just a couple of hours ago, it was mangled. There’s a Lucas Oil trailer that’s been flipped a couple times. The whole building is just twisted up unbelievable. I guess they’ll analyze the storm later, but it was obviously some sort of tornado.

“We’re right beside the Bowyer crew and right beside the Lucas Oil trailers and we’ve all taken minimal damage. We’ve got two or three dents or scratches on the hauler. I’m going to say we were pretty lucky. Right in front of use there’s tin laying everywhere, the fence is tore down. There was one of those Terex lights, like a generator light, it’s turned over. … they have all steel trash cans here and they’re all just gone. There were 40 or 50 of them and they’re all just disappeared and there’s all this metal. We really didn’t know it was as bad as it was until daylight.”

Burroughs was glad that his driver, who travels with his wife Andrea, hadn’t arrived at the track yet.

“I’m really glad they weren’t because they would’ve been upside down with the rest of ‘em,” Burroughs said, noting that Richards tows a camper behind a pickup truck.

Garrett Alberson, the Las Cruces, N.M., racer who serves as the crew chief of the Black Diamond house car piloted by former Lucas Oil titlist Earl Pearson Jr. of Jacksonville, Fla., was with team members about 20 minutes northwest of the track staying at the Lucas Oil ranch house when the storm struck. He said he was standing on the home’s patio and, while the brunt of the storm missed his location, he heard a train-like “constant roar, like the sound they talk about with tornadoes.”

Alberson and other crewmen drove over to the track to see if they could help, but fire and rescue crews had already “gotten everything under control so we looked around and you could see how much damage there was,” he said. “It’s just a miracle that everyone survived and there weren’t more injuries than there was. And it’s a blessing it wasn’t midweek when more campers would’ve been there.”

The magnitude of the damage to the grounds wasn’t lost on Burroughs either.

“We had to unload the cars this morning to get everything strapped back down to leave, and when I was up there on the lift gate, I’m looking around and I’m telling you, the front of my truck wasn’t 150 yards from that off-road grandstand that was just destroyed,” Burroughs said. “That just puts it in perspective how close it was to us.”

“It’s unfortunate, but the big thing is, nobody lost their life. I feel bad for the people in the campground. They’re just totally destroyed. They’re piled on top of each other.”

“We stayed in the storm shelter for probably 30 minutes, and then when it died down we walked back out in the pits and there was stuff everywhere. The off-road grandstands were down, campers were flipped over, fences were down. … then ambulances showed up, and fire-rescue. It was like chaos for about two hours.”