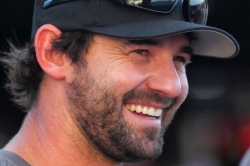 Landers underwent tests Thursday at the Arkansas Heart Hospital in Little Rock that revealed a torn carotid artery, the artery supplying oxygenated blood to the head and neck. Doctors called Thursday evening to caution the 34-year-old driver against racing for the time being, but his father said the timeline for treatment and recovery should be clearer Monday after additional doctors review test results.

Landers, a two-time series winner in 2016, endured a serious accident in hot laps before the July 15 Lucas Oil Series event at Tri-City Speedway in Granite City, Ill., but he competed that night and in four events since then.

By agreement of a majority of 10 drivers with perfect attendance on the Lucas Oil Series agree, Landers will receive 75 hardship points for any races he misses until he’s medically cleared.

Lucas Oil's Aug. 19-20 Topless 100 at Batesville was cancelled because of wet weather. The national tour is scheduled to return to action Aug. 26-27 at Ponderosa Speedway in Junction City, Ky., and Lawrenceburg (Ind.) Speedway.