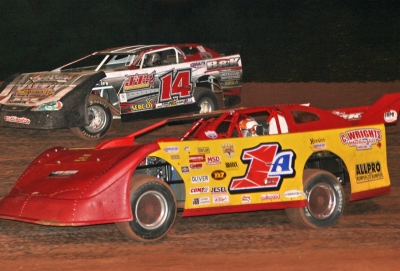 MINDEN, La. (July 4) — Polesitter Ronny Adams of Greenwood, La., led every lap at Champion Park Speedway for his first O'Reilly Southern United Professional Racing tour victory of the year and 33rd of his career. Adams won an early side-by-side battle with David Ashley of Zachary, La., and survived a late skirmish amid lapped traffic for a $2,500 victory. | Slideshow

Ashley, who started outside the front row, finished second in the 40-lapper followed by hometown driver Kyle Cummings and series rookie Kevin Sitton of Baytown, Texas. Another Texan, Patrick Daniel of Wills Point, rallied from his 14th starting spot for his second consecutive top-five finish on the series.

Adams worked the low groove through the early laps while Ashley kept up on the outside groove. As the outside groove faded, Ashley eventually fell back and chased the leader from the second spot while pursing drivers dueled behind them. When Adams was slowed by a lapped car in the late going, Ashley rolled to the outside to take a stab at the lead. But Adams got into turn three too hot and made contact with the slower car of Nicholas Brown, who spun to bring out a lap-35 caution. Adams cruised the rest of the way for the victory, his first since a Sept. 1, 2007, victory in Chatham, La.