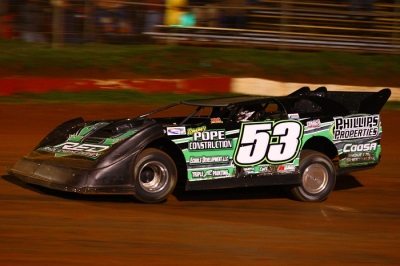 Griffin, who started third, took the lead from Ross Martin of Talladega, Ala., on lap three and never looked back to take the $3,000 triumph.

“This is a big win for us as we have worked some long hours during the last week just to get the car ready,” said Griffin, who was victorious in his first-ever start on the Chevrolet Performance Super Late Model Series. “I have to thank Tommy Pope for giving me this opportunity because I haven’t been racing a lot and I only raced one time last year.  This was a great car to drive tonight.”

Griffin survived a major scare on a lap-31 restart. Second-place Tim Busha of Boaz, Ala., got a big run on Griffin down the front straightaway, but, when they reached turn one, Busha made contact with the left-rear corner of Griffin’s car and the leader spun. Race officials ticketed Busha with the caution flag, however, and Griffin was put back on the point for the restart.

Griffin went on to take the checkered flag 1.56 seconds ahead of National Dirt Late Model Hall of Fame Inductee Ronnie Johnson of Chattanooga, Tenn., started sixth and finished second after an exciting battle with Jake Knowles of Tyrone, Ga. Knowles settled for third, followed by 12th-starter Tyler Crowder of Lamont, Fla., and Josh Adkins of Talladega, Ala., who was the Rookie of the Race with a fifth-place effort.

Notes: Griffin’s Bloomquist Race Car sports sponsorship from Tommy Pope Construction and Echols Development. … Eight caution flags slowed the feature, which took just over 40 minutes to complete. … Jaden Frame, a 15-year-old from Winchester, Tenn., finished ninth. … Griffin, Knowles and Crowder were among the drivers making first-ever starts on the Chevrolet Performance Super Late Model Series. … The next event for the tour will be on April 12 at East Alabama Motor Speedway in Phenix City, Ala.