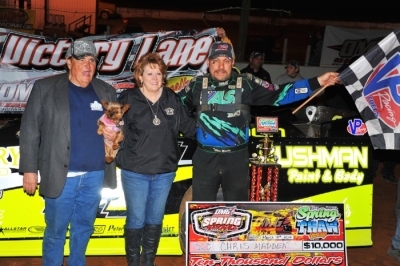 Madden’s latest triumph came in an Old Man’s Garage Spring Nationals by Schaeffer’s Oil event and was worth $10,000. It followed his previous Saturday-night scores in National Dirt Racing League programs on March 1 at East Alabama Motor Speedway in Phenix City, Ala., and March 8 at Smoky Mountain Speedway in Maryville, Tenn.

Starting third in his Bloomquist Race Car, Madden quickly moved into second place and chased World of Outlaws Late Model Series regular Eric Wells of Hazard, Ky., early in the distance. Madden made his move on lap 22, charging around the outside of Wells off turn four to assume command for good.

Scott Bloomquist of Mooresburg, Tenn., passed Wells for second on lap 29 and spent the remainder of the distance in the position. The 50-year-old superstar ran within striking distance of Madden but was unable to find a way by one of his protégés for the second straight night. In Friday’s 40-lap Spring Thaw preliminary feature, Madden and Bloomquist finished second and third, respectively.

Wells settled for a third-place finish – his second top-five run in as many nights – after starting from the pole and leading laps 1-21. His performance produced a sweep of the podium by Bloomquist-built race cars.

The first caution came on lap nine for Dustin Linville of Lancaster, Ky., who slowed while trying to exit the track off of turn four. Friday-night winner Jimmy Owens of Newport, Tenn., who was battling for second with Madden, tried to go underneath Linville in turn four but made hard contact with Linville’s stricken machine, leaving Owens’s one-race-old Club 29 Race Car with significant right-side damage that forced him to pit and eventually retire several circuits later.

The race’s second yellow flag came on lap 11 because an official in the infield needed medical attention after being struck by flying debris and the final slowdown came on lap 46 when David Payne of Murphy, N.C., fell off the pace in turn four.

Notes: Madden’s Bloomquist Race Car is powered by a Clements Automotive Engine and sponsored by Century Plastics, Henderson Amusements, Cushman Paint & Body, Hamrick’s of Gaffney, Ohlins Shocks, Hypercoils and VP Fuels. ... Madden has four victories overall this season, including a Lucas Oil Late Model Dirt Series event on Feb. 7 at Golden Isles Speedway in Brunswick, Ga. His combined earnings for the four triumphs is a whopping $49,517. ... Madden became the 11th different winner in as many Spring Nationals Series events contested since the tour’s birth in March 2013. ... The Old Man’s Garage Spring Nationals Series by Schaeffer’s Oil will be back in action on March 28 at Tri-County Race Track in Brasstown, N.C. ($4,000 to win) followed by a visit to Smoky Mountain Speedway in Maryville, Tenn., on March 29 ($6,000 to win).