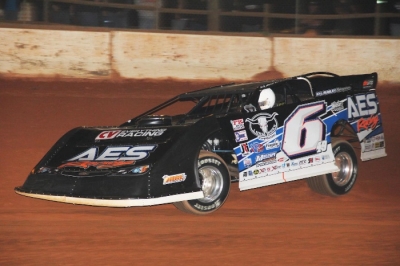 “This is always a special race,” Davenport said. “I have known Larry (Trull) for quite a while now, going on seven or eight years. It definitely means a lot in this area to win this race. Plus, what he does for the Make-a-Wish foundation. That’s always great, the money that gets raised for that. Everybody always donates some of their winnings back because it is such a great cause.”

The $4,000 triumph also stirred some memories for the 30-year-old Davenport, who scored a career-milestone win seven years ago at Carolina Speedway.

“To come back here again with the Rumleys (car owners Leroy and Kevin Rumley) and win here is great,” said Davenport, who recorded his seventh career victory on the Carolina Clash Series. “I won my first $10,000-to-win race at the Skyler Trull Memorial (in 2007) when I was driving for Mark Beaver and them. It’s just a good feeling.”

The main event was a slow one getting going as the initial start was waved off four times. The cars of Dustin Mitchell, Luke Roffers, Michael Marlowe and defending race champion Dennis ‘Rambo’ Franklin were a few of the cars to suffer damage before the first official lap was put in the books.

On the fourth attempted start the green light stayed on and Davenport flexed his muscles, staying safely ahead of second-place finisher Brandon Overton of Appling, Ga. Each time after that Davenport was able to pull off well-executed starts and keep his competitors at bay.

The final obstacle for Davenport to overcome was the yellow flag flying for the last time with two laps to go. On the restart, however, Davenport again was flawless as he drove away to win by five car lengths over Overton.

Notes: Davenport drives a Longhorn chassis powered by a Clements/Rumley engine. Sponsorship comes from AES Racing and CV Racing Products… This was Davenport’s third win of the young 2014 season. He previously captured a Lucas Oil Late Model Dirt Series event at Golden Isles Speedway in Brunswick, Ga., on Feb. 7 and the March Madness XII finale on March 2 at Cherokee Speedway in Gaffney, S.C.... The Carolina Clash Series will next travel to Lancaster (S.C.) Speedway on March 29….