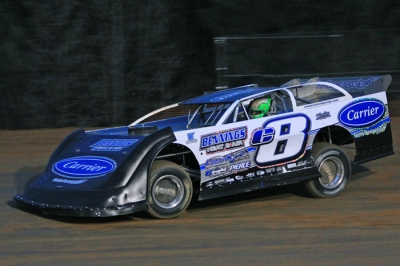 VIVIAN, La. (March 14) – Timothy Culp ran the race of his life on Friday night — and he did it in front of his home track’s fans.

So naturally, after Culp passed Dirt Late Model Hall of Famer Billy Moyer for the lead on lap 20 and went to win the unsanctioned 50-lap Pelican 100 at ArkLaTex Speedway, the young driver from West Monroe, La., was absolutely ecstatic in victory lane. | Video

“This is the day I’ve lived for my whole life,” said Culp, who has spent much of his short racing career competing at the quarter-mile oval. “Ya all don’t understand … this is like Dale Jr. winning the (Daytona) 500 a couple weeks ago to me. This is huge to me, and hopefully we can just build on it and have a great season.”

Driving a Bennings Heat & Air-owned Bob Pierce Race Car that he picked up at the chassis builder’s shop in Oakwood, Ill., just two weeks ago, Culp spent the race’s early stages locked in a side-by-side battle for the lead with Moyer. Culp briefly nosed ahead of Moyer, who started from the pole position, to lead lap 12 before gaining command for good on the 20th circuit when a slowing car at the top of the track caused Moyer to break his momentum.

Several caution flags slowed the remainder of the distance, but Culp, 23, mastered each restart to pick up a $5,000 check for the biggest triumph of his budding Super Late Model career.

Culp, who is beginning just his fourth full season of Super Late Model action, smoothly negotiated the track he knows well with a car he called “perfect.” He never wavered while battling Moyer early and outrunning the veteran late.

“It was 50 laps and I knew we weren’t even halfway yet so I just kind of followed (Moyer) and looked for his weaknesses,” Culp said of his strategy. “That lapped car helped me out a lot (to gain control of the lead), so thanks to him. Then, once I moved up (the track), I could move around a little bit more and felt even better.”

Culp didn’t allow the rash of late-race cautions to shake his focus.

“I was just trying to stay pumped and on the wheel,” said Culp. “I knew I could do it. I just had to get to the checkered flag.”

Notes: Culp’s C-eight Motorsports Pierce Race Car is powered by a Kuntz & Co. engine and carries sponsorship from Bennings Heat & Air, Carrier and Culp’s Automotive…. The Pelican 100 was originally scheduled as a two-day, $10,000-to-win program, but officials elected to cut it to a one-day, $5,000-to-win event due to a gloomy weekend weather forecast. The track noted that the change allowed competitors an opportunity to make money on Friday, as weekend likely would not be completed. ... Fifth-place finisher Chris Wall debuted a new Club 29 Black Diamond Chassis out of Ronnie Stuckey's shop, which is located roughly 15 miles from ArkLaTex. ... Jared Landers finished sixth in making his first-ever Late Model start at ArkLaTex. He notched a $10,000 modified victory at the track during the 2009 Doug Murphrey Memorial…. With a strong turnout of drivers and fans, track owner Gene Boyter bumped the feature’s start money from $400 to $500. ... Keith Craft won the track's random draw to receive the first provisional starting spot, and Zach McMillan's $1,000 bid topped the auction for the second provisional. ... Ronny Lee Hollingsworth rallied from 18th to finish second in the first consolation race. He spun after contact with Robbie Stuart while leading on the sixth lap and went to the tail. ... Dane Dacus made his first laps in a new Rocket Chassis. ... MB Customs co-founder Chris Mars served as crew chief for long-time client and inaugural Pelican 100 winner Ray Moore, who was the race’s only previous winner from Louisiana until Culp broke through.