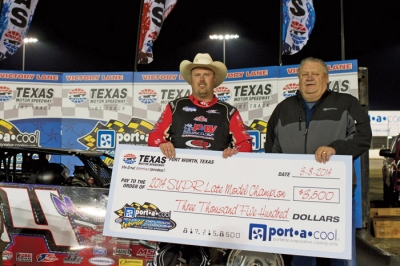 FORT WORTH, Texas (March 8) — If there was ever a feel good story to begin the year, then what transpired in the 40-lap Port-A-Cool Texas World Dirt Track Championship at Texas Motor Speedway Dirt Track on Saturday night exemplified exactly that. | Slideshow

A regular on the World of Outlaws Late Model Series for the second straight year, Bagley was all smiles after winning his first-ever feature at the 4/10-mile oval in a rare appearance close to his Lone Star State residence.

“Our schedule involves so much traveling, (family, friends and supporters) don’t get to see us race that often,” said Bagley. “My dad, he’s my best friend and got me into racing, but he might only get to see me race three times a year and this is one of them.

“It’s great to come back here and race in front of the people that support me and have helped me to get to where I’m at. Whenever I can go out and win, it makes things a lot sweeter.”

Bagley’s weekend didn’t start well, however. He smacked his teammate, Zach McMillan of Kilgore, Texas, in an inescapable mishap during Thursday night’s practice session. When McMillan spun out it left Bagley with nowhere to go, creating massive right-side damage on Bagley’s No. 14M. The crew hustled back to their headquarters — nearly a five-hour round trip — to piece the hot rod back together and beat the clock to return on race day.

“The car pretty much had everything that bolts-on — from the rear end to the front end and all the right-side body pieces — damaged,” said Bagley. “(Crew chief) Nick (Hover) just wanted to make sure everything was good and straight on the frame, scale and check the front end properly, so we (would) be 110 percent ready tonight.”

Once back on the track on Saturday night, the 2011 P&W Sales SUPR Series champion took care of the rest, rewarding the Team 14 crew with a win for their hard work. His victory included not a $3,500 payday, but also a cowboy hat trophy and an extra $500 in racing products from J&J Motorsports.

Bagley celebrated his eighth career SUPR victory and his second in a row after capturing the 2013 series finale at Lone Star Speedway in Kilgore, Texas.

Chris Brown of Spring, Texas, didn’t go quietly in the A-Main, however. Brown traded the lead with Bagley on lap 13 before Bagley shot back by on lap 26 to assume command for good.

Brown ultimately settled for second place, some 2.8 seconds behind the winner.

Seven-starting Ryan Gustin of Marshalltown, Iowa, had a strong showing, briefly battling three-wide battle for the lead with Brown and Bagley after a lap-24 restart before losing touch with the leaders and finishing third. Gustin’s car sported some right-rear cosmetic damage that possibly hampered his late-race progress with a tire rub but still managed to complete the podium.

Jon Mitchell of Texarkana, Texas, was one of the consistently fastest drivers all weekend during timing, locking up a fourth-place finish heading into a birthday weekend at The Pelican event next week.

Rodney Sanders of Happy, Texas, finished fifth as a sub for Slayton, Minn’s Jason Krohn, completing his amazing weekend at Texas Motor Speedway Dirt Track. He grabbed top-five finishes in all classes that ran at TMS over the weekend, winning the 30-lap Limited Modified feature and finishing third in the open-wheel Modified A-Main.

Notes: Bagley's Rocket Chassis Race Car is powered by a Clements Racing Engine and sponsored by P&W Sales MFG, Keyser Manufacturing Company, GottaRace, MSI, RE Racing Consultants and P&W Iron Works…. The feature ended at 11:04 p.m. and was slowed by two cautions, with seven cars on the lead lap…. The feature’s hard charger was last year’s event winner Shane Hebert of Lafayette, La. After flipping his own machine in a preliminary accident, he borrowed a ride from Brandon Hightower to start 21st in the A-Main thanks to a provisional spot and charged forward to finish eighth…. Troy Taylor of Midlothian, Texas, was another honorable mention among chargers, going from 16th to ninth…. A total of 217 cars over three divisions competed in the weekend action at Texas Motor Speedway Dirt Track…. The P&W Sales SUPR Series will be off for a month before returning to action on April 12 at its home track, Baton Rouge Raceway in Baker, La…..